Narodowy Bank Polski (NBP; the National Bank of Poland) is the central bank of Poland. It controls the issuing of Poland's currency, the złoty. The Bank is headquartered in Warsaw, and has branches in every major Polish town. The NBP represents Poland in the European System of Central Banks, an EU organization.

Following the death of Sławomir Skrzypek in the Polish Air Force Tu-154 crash on 10 April 2010, the Bank's leadership has been vacant. 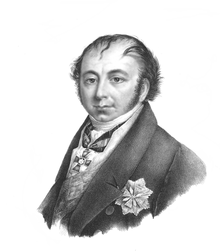 Although the bank has existed under its current name since 1945, it is a continuation of two previous central banks of Poland, both named simply Bank of Poland (Bank Polski). The first one was founded in Warsaw in 1828 by Duke Franciszek Ksawery Drucki-Lubecki. An institution of the government of the Kingdom of Poland, it was entitled with issuance of the Polish currency as well as control over the credit rates. It was also entitled with a concession to operate foreign currencies and buy off credits issued by foreign companies and banks.

Throughout its existence, the Bank of Poland was allowed to issue banknotes and coins up to the amount of its stock (initially 30,000,000 złotych, 42 millions in 1834 and 53 millions in 1841). As a legal entity, the bank also financed a number of important enterprises in Russian-held Poland. Between 1829 and 1837 it spent a large part of its income on road construction, until 1842 it was also the main sponsor of the coal mining development in the region of Zagłębie and the Old Polish Industrial Area around Skarżysko-Kamienna.

Seriously crippled by administrative measures after the November Uprising, after the January Uprising it was made subordinate directly to the Russian Imperial Ministry of Treasury. During the period of liquidation of Polish institutions following the failed uprising, in 1870 it was deprived of the rights of a currency issuing organ and banned from giving long-term credits. On 1 January 1886 it was officially closed down and by 1894 its assets were swallowed by the State Bank of Russia.

When Poland regained independence in 1918, it was lacking a central bank. Pursuant to the State Treasury Repair Act of 11 January 1924, Minister Władysław Grabski created a new Bank of Poland as a joint stock company. Its stock was soon raised from the initial 100,000,000 złotych to 150 million, split into 1.5 million shares. The bank was independent of the government of Poland, though it carried out the government's monetary policies. As the main shareholder, the President of Poland had the right to name the chairman and deputy chairman of the bank's board of trustees.

Until 31 December 1944, the bank had a monopoly for printing currency, with gold reserves of 40% or higher. The dividend could not exceed 8% of income. In the event of a higher income, the state treasury had the right to 50% to 66% of it. Prior to the invasion of Poland in 1939, all the gold reserves were evacuated from Poland to Paris, then to London and on to Canada. The Bank continued to function in exile, as the central bank of the Polish Government in Exile, and financed most of the Polish armed forces. In 1946 the remaining prewar gold reserves were returned to Poland's new communist authorities, while the Bank of Poland itself was closed down and finally in 1952 absorbed by the newly-created National Bank of Poland.

The latter was one of two banks allowed to operate in Poland's postwar planned economy. It had a monopoly for currency, credits and cumulation of savings. The other bank, PKO Bank Polski, was responsible for private accounts. After the fall of the communist system in 1989, the market economy was reintroduced and the NBP limited its functions to currency control and supervision of other, privately-controlled banks.