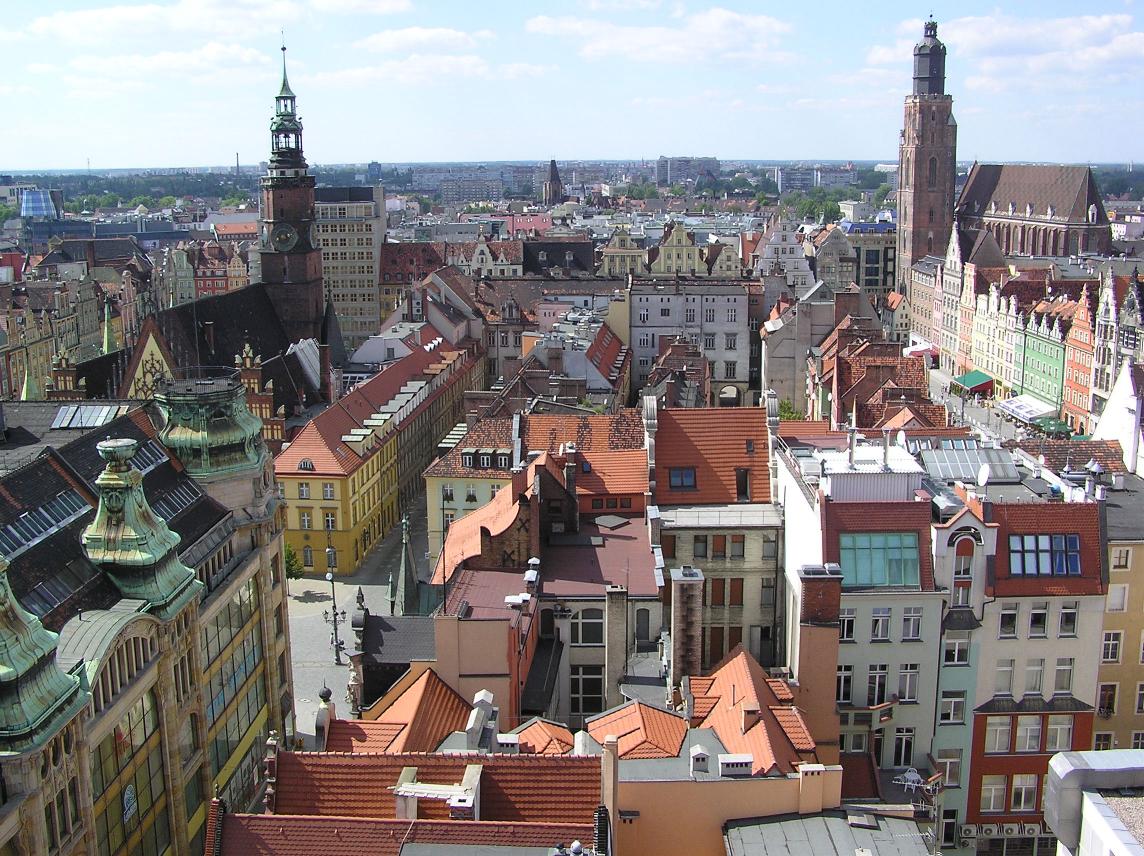 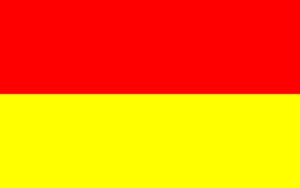 Wrocław Audio-IPA-pl|Wroclaw.ogg|'|w|r|o|c|ł|a|f ( _de. BreslauAudlisten|DE-Breslau.ogg; _cz. Vratislav; _la. Vratislavia or Wratislavia; : "ברעסלוי") is the chief of the historical region of in south-western , situated on the Oder ( _pl. Odra) river. Over the centuries the city has been part of Poland, , , , and . In 1945, the returned the city to after many centuries. Since 1999 it has been the capital of . According to official population figures for 2006, its population is 635,280, making it the fourth largest city in Poland.

The city's name was first recorded in the year 1000 by Thietmar's chronicle called "Thietmari Merseburgensis episcopi Chronicon" as Wrotizlawa. The first municipal seal stated "Sigillum civitatis Wratislavie". Simplified name is given in 1175 as Wrezlaw, Prezla or Breslaw.The Czech spelling was used in Latin documents as "Wratislavia" or "Vratislavia". At that time, "Prezla" was used in , which became "Preßlau". In the middle of the 14th century the (and later ) form of the name Breslau began to replace its earlier versions.

The city of Wrocław originated in as a Bohemian stronghold at the intersection of two trade routes, the and the . The city was first recorded in the 10th century as "Vratislavia", possibly derived from the name of a Bohemian duke . Its initial extent was limited to district of Ostrów Tumski (the Cathedral Island).

The city became a commercial center and expanded to Wyspa Piaskowa (Sand Island), then to the left bank of the . Around 1000 the town had 1000 inhabitants [Weczerka, p. 39] . By 1139 a settlement belonging to Governor (a.k.a Piotr Włast ) was built, and another was founded on the left bank of the , near the present seat of the university. While the city was Polish, there were also communities of Bohemians, Jews, Walloons [Norman Davies "Mikrokosmos" page 110-115] and Germans [Weczerka, p. 41] .

The city was devastated in 1241 during the . The inhabitants burned the city to force the Mongols to a quick withdrawal.

The population was replenished by [Thum, p. 316] who settled there and became the dominant ethnic group, though the city remained multi-ethnic [Norman Davies "Mikrokosmos" page 110] . Breslau, the Germanised name of the city, appeared for the first time in written records, and the city council used only and Germanfrom the beginning. [Thum, p. 316]

Breslau was expanded by adopting a . The expanded town was around 60 hectares and the new Main Market Square (Rynek), which was covered with timber framed houses, became the new center of the town. The original foundation, Ostrów Tumski, became the religious center. Breslau adopted in 1262 and, at the end of the 13th century joined the . The Polish Piast dynasty

In 1335, Breslau was incorporated with almost all of Silesia into the . Between 1342 and 1344 two fires destroyed large parts of the city.

The reached Breslau in 1518 and the city became Protestant. Breslau supported the Bohemian revolt in fear of losing the right to freedom of religious expression. In the following the city was occupied by Saxon and Swedish troops and lost 18.000 of 40.000 citizens to plague.

The emperor brought in the by encouraging Catholic orders to settle in Breslau, starting in 1610 with the Minorites, followed by Jesuits, Capucins, Franciscans, and finally Ursulines in 1687. These orders erected buildings which shaped the Breslau's appearance until 1945. At the end of the Thirty Years' War, however, Breslau was one of only a few Silesian cities to stay Protestant.

During the Counter-Reformation the intellectual life of the city, shaped by Protestantism and , flourished, even as the Protestant bourgeoisie lost its role as the patron of the arts to the Catholic orders. Breslau became the center of German Baroque literature and was home to the First and Second Silesian school of poets.

The age of Enlightment

The annexed Breslau and most of Silesia during the in the 1740s. empress Maria Theresa renounced the territory in 1763.

Before and after World War I

During the Napoleonic Wars Breslau was occupied by an army of the . The fortifications of the city were leveled and monasteries and cloisters were secularized. The Protestant Viadrina university of was relocated to Breslau in 1811, and united with the local Jesuit University to create the new Schlesische Friedrich-Wilhelm-Universität (). The city became the center of the against Napoleon Bonaparte; volunteers from all over Germany gathered there.

Prussian reforms increased prosperity in Silesia and Breslau. The leveled fortifications opened space for Breslau to grow beyond her old borders. Breslau became an important railway hub and industrial centre, notably of linen and cotton manufacture and metal industry. The unified university resulted in the city becoming a major Prussian center of sciences, and the secularization laid the base for a rich museum landscape.

German unification in 1871 left Breslau the sixth-largest city in the . Its population more than tripled to over half a million between 1860 and 1910. The 1905 census lists 470,904 residents, including 20,536 Jews, 6,020 Poles and 3,752 others.In 1919, Breslau became the capital of the newly created . Due to increased ethnic tensions, in August 1920 during the pro-Polish in neighbouring , local Polish institutions were devastated. The number of Poles in Breslau dropped from 2 percent before to 0.5 percent after the reconstitution of Poland [Harasimowicz, p. 466f] . Antisemitic riots occurred in 1923

The city boundaries were expanded between 1925 and 1930 to include an area of 175 km² with a population of 600.000. In 1929 the Werkbund opened "WuWa" (German: Wohnungs- und Werkraumausstellung) in Breslau-Scheitnig, a international showcase of modern architecture by architects of the Silesian branch of the Werkbund. In June 1930 Breslau hosted the "Deutsche Kampfspiele", a sporting event for German athletes after Germany was excluded from the after World War I.

The city became one of the largest support bases of Nazis, who in the 1932 elections received 43,5 % of Breslau's votes, their third largest total in the entire country [Norman Davies "Mikrokosmos" page 369] .

After Hitler's Putsch, the began actions against Polish and Jewish students

For most of World War II the fighting was not close to Breslau. Refugees swelled the population to nearly one million [ [http://www.wroclaw.pl/m6852/ History of Wrocław] ] .

In February 1945 the Soviet approached the city. declared the city a "Festung" (fortress) to be held at all costs. Hanke finally lifted a ban on the evacuation of women and children when it was almost too late. During his poorly organised evacuation in early March 1945, 18,000 people froze to death in icy snowstorms and -20°C weather. By the end of the , half the city had been destroyed. 40,000 inhabitants lay dead in the ruins of homes and factories. After a siege of nearly three months, "Fortress Breslau" surrendered on , just before the end of the war. [ [http://www.wratislavia.net/festung.htm Festung Breslau (Wrocław Fortress) siege by the Soviet Army - photo gallery] ]

After World War II Wrocław became part of Poland under the terms of the . Most remaining German inhabitants fled or were expelled. The population of Wrocław was increased by resettlement of .

Wrocław is now a European city with a Polish population and a mixed architectural heritage, influenced by n, Austrian, and n traditions, as well as a number of buildings by eminent German modernist architects.

In July 1997, the city was heavily affected by a flood of the Oder River, the worst flooding in post-war Poland, Germany, and the Czech Republic. Around one third of the city's area stood under water. [ [http://miasta.gazeta.pl/wroclaw/5,44548,1501462.html 1997 great flood of Oder River - photo gallery] ] An earlier equally devastating flood of the river took place in 1903. [ [http://www.breslau-wroclaw.de/de/breslau/postcard/projektor/print.php?showId=1000 1903 great flood of the Oder river - photo gallery] ]

Wrocław is the capital city of , a province (voivodeship) created in 1999. It was previously the seat of . The city is a separate urban and city county (). It is also the seat of , which adjoins but does not include the city.

Wrocław's major industries were traditionally the manufacture of railroad cars and electronics. The city is served by and a .

Like all of Poland, Wrocław's population is predominantly ; the city is the seat of an Archdiocese. However, post-war resettlements from Poland's ethnically and religiously more diverse former eastern territories ( _pl. ) and the eastern parts of post-1945 Poland (see ) account for a comparatively large portion of Greek Catholics and Orthodox Christians of mostly Ukrainian (see ) and Lemko descent.

The Wrocław area has many popular professional sports teams. The most popular sport today is probably , thanks to , the award-winning men's basketball team (former Polish champions, 2nd-place in 2004). Some matches of the s in and are scheduled to take place in Wrocław.