Kingdom of Poland (1025–1385)
See also: History of Poland during the Piast dynasty

The Kingdom of Poland (pol. Królestwo Polskie, lat. Regnum Poloniae, ukr. Королівство Польське) was the Polish state from the coronation of the first King Bolesław I the Brave in 1025 to the union with Lithuania and the rule of the Jagiellon dynasty in 1385.

The basis for the development of a Polish state was laid by the Piast, which were preeminent since the 9th century. Duke Mieszko I's conversion to Christianity paved the way for Poland to become a member of the family of Christian kingdoms. In 1000, during the Congress of Gniezno, Poland was recognized as a state by the Holy Roman Empire and the Pope. In 1025, Duke Boleslaus I the Brave was crowned King of Poland, marking the starting date for a Polish Kingdom, though for long years the Poles were ruled not by Kings but by Dukes.

The King ruled the country in his own responsibility but was expected to respect traditional customs of people. The succession to the rule was not legally restricted by primogeniture. All sons of the King or Duke had the same rights of inheritance and the one that in some way proved the strongest succeeded to the throne.

Duke Bolesław III the Wrymouth, who reigned 1102 to 1138, tried to end the repeated struggles between various claimants by setting the government of Poland on a more formal footing. In his testament, he divided his lands into five Duchies, which he distributed among his sons. 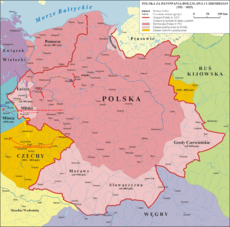 Kingdom of Poland (900-1385) Before the Polish-Lithuanian Commonwealth

To ensure unity, he established the senioral principle, which stated that the eldest member of the dynasty should be High Duke and have supreme power over the other Dukes. The High Duke ruled, in addition to the Duchy he inherited, over the indivisible senioral part, a vast strip of land running north-south down the middle of Poland, with Kraków as the chief city. The High Duke's prerogatives also included control over Pomerania, a fief of the Holy Roman Empire.

While the senorial part always fell to that member of the Dynasty that happened to be senior, the other four Duchies were inherited in the usual way among the descendants of Boleslaw's sons.

However, these provisions were soon broken, with the various Dukes trying to gain the position of High Duke for themselves, regardless of actual seniority. The provisions, meant to ensure unity fragmented the country even further and resulted in a decline of monarchical power. Poland even came under the influence of the Přemyslid kings of Bohemia, whose dynasty however died out before they could gain a stable foothold in Poland.

The fragmentation ended with the accession of the Piast Duke Władysław I the Elbow-high in 1306. He united the various principalities of the Kingdom of Poland and in 1320 was crowned King. His son Casimir the Great greatly strengthened the Polish state in both foreign and domestic affairs.

Dynastic change and union with Lithuania

Casimir was the last male member of the Piast dynasty and was succeeded by his nephew Louis, King of Hungary from the Angevine dynasty. The upsurge of the monarchy continued under Louis.

Since Louis had no son either, his daughter Jadwiga became the heir of the Polish monarchy.

Under the terms of the Union of Krewo, she married Jagiełło, Grand Duke of Lithuania, who converted to Christianity. This marriage created not only a dynastic union between Poland and Lithuania but also bound the two countries together for the next four centuries.