Dexia N.V./S.A., also referred to as the Dexia Group, is a Belgian-French financial institution active in public finance, providing retail and commercial banking services to individuals and SMEs, asset management, and insurance. The company has about 35,200 members of staff and core shareholders' equity of €19.2 billion as at 31 December 2010, and provides governments and local public finance operators with banking and other financial services. Asset Management and Services provides asset management, investor and insurance services, in particular to clients of the two other business lines. In 2008, the bank received bailouts for €6 billion, and it has become the first casualty of the 2011 European sovereign debt crisis. Negotiations are taking place for its breakup.[2] Its headquarters are in Saint-Josse-ten-Noode, Brussels.[3]

In the 2010 Fortune Global 500 (which lists companies by total income)[4] Dexia was ranked 49th, the top-ranked Belgian company.[5]

The company was founded in 1996 through the merger of Crédit Communal de Belgique/Gemeentekrediet van België (founded in 1860) and Crédit Local de France (founded in 1987). The Dexia Group was founded as a dual-listed company, but in 1999 the Belgian entity took over the French entity to form one company. The company is headquartered in Brussels, Belgium.

On 29 September 2008 Dexia came under pressure during the crisis in the banking sector. Other banks and financial institutions refused to provide further credit to Dexia because of potential losses at its U.S. subsidiary FSA and from a multi-billion loan to troubled German bank Depfa.[7] The price of the Dexia share, having peaked above €20 in the previous years, but gradually fallen to around €10, dropped in one day to €6.62.

The next day the rating agency Moody's downgraded Dexia's long term debt and deposits ratings from Aa1 to Aa3,[8] and downgraded the individual banks' strengths to C- ("adequate intrinsic financial strength") with a negative outlook.[9]

Dexia was quickly forced to apply for a bailout by the State. This support was assured within days, taking two forms:

The three states have the potential to make a profit from their intervention:

Since Dexia had a New York banking office they were eligible for various bailouts from the US Federal Reserve. At its peak Dexia had borrowed $58.5 billion.[12]

On 30 September 2008 the company's chairman Pierre Richard and CEO Axel Miller were sacked, and were replaced on 7 October 2008 by former Belgian prime minister Jean-Luc Dehaene and Pierre Mariani respectively.

At the end of 2008 Dexia sold the healthy parts of FSA, ceased its trading activities in Paris and trading on its own account in the financial markets.

Further losses are still possible on the remaining FSA portfolio. On 19 January 2009 Moody's lowered the credit rating for Dexia's long term obligations and saving accounts of the three banking parts of Dexia (Dexia Credit Local, Dexia Bank Belgium and Dexia Banque Internationale in Luxembourg) from Aa3 to A1. The rating agency also downgraded the Bank Financial Strength Rating for the three banks from C− to D+.

On 5 March 2009 Dexia's share price fell to an all-time low of €1.21, a loss of over 90% in a year. A further restructuring plan was announced, with the firm aiming to concentrate on its primary activities, and to avoid risks on the financial markets. A total of 1,500 job cuts were announced, of which more than half were in Belgium, 260 in France, and the rest worldwide. Dexia's share price subsequently increased over the rest of 2009, largely varying between €4 to €7.50.

On 31 March 2010 Bloomberg reported that Dexia was one of the largest borrowers from the discount window of the United States Federal Reserve, having outstanding loans of over $30 billion.[13]

In February 2009 the bank announced net losses of 3.3 billion euros (approximately 4.2 billion US dollars) for 2008.[14] The Dexia 2008 annual report mentions among others losses of €1.6 billion from selling FSA, €600 million on portfolios and €800 million on counterparties (including Lehman Brothers, Icelandic banks, and Washington Mutual)

According to the financial services provider Bloomberg Dexia lost €78 million through the Ponzi scheme of Bernard Madoff.[15]

On 6 February 2010 Dexia could announce that the European Commission had, under certain conditions, approved of the restructuring plan that was necessary to justify the government support for Dexia and to prevent unfair competition:[16]

Vintage retail activities represented a bigger share in profits again in 2010; apart from Belgium and France, Turkey became very promising in this area. So much so that predictions were that Turkish staff would account for half of the Dexia employees by 2014.[17] At the same time, outgoing cashflows were diminished by reducing the bonds portfolio; even selling bonds at a loss, if necessary, which explained to a large extent the lesser profits in 2010.

More incoming funds from private saving accounts and less outgoing capital through bonds and loans to public institutions meant that Dexia could already worry a bit less about finding sufficient short term funding. The greater international trust in the company also showed when it announed an early retirement from the State Guarantee in 2010.[18]

Dexia and La Banque postale, the bank subsidiary of the French postal services, reached an agreement in January 2011 about a cash transaction involving covered bonds worth €3 billion.[19] This was presented for La Banque Postale as an investment at market conditions, and as a extra source of liquidity for Dexia.

Alleged differences of opinion were reported at the top of Dexia.[20] More specifically about tensions between Belgian directors and the French CEO, Pierre Mariani, concerning on the one hand the deficitary investments that had been mostly done in the French division of Dexia, and the liquid funds that were above all present in Belgium.

On July 15 the European Banking Authority, as part of its European bank stress tests, gave Dexia a clean bill of health, reporting that its tier 1 capital was 12.1 percent, and would fall to 10.4 percent in 2012 under its "adverse scenario". This would make it one of Europe's safest banks[21].

Dexia posted a €4 billion loss for the second quarter, the biggest in its history, after writing down the value of its Greek debt. On 4 October its shares fell 22% to €1.01 in Brussels, cutting its market value to €1.96 billion. Discussions were taking place about a possible breakup, with a plan to place its "legacy" division into a bad bank with government guarantees.[22]

On 10 October, it was announced that the Belgian banking arm will be purchased for €4 billion by the Belgian federal government. Some units such as DenizBank and the Luxembourg retail bank will be put up for sale. Part of its French operations are likely to be purchased by Caisse des dépôts et consignations and La Banque Postale. The remaining troubled assets, including a €95 billion bond portfolio would remain in a "bad bank" that would receive funding guarantees of up to €90 billion provided by the governments of Belgium (60.5%), France (36.5%) and Luxembourg (3%).[23][24]

Dexia is a member of the BEL20, CAC Next 20, and LuxX indices. Dexia is also one of the components of the Euro STOXX[25] and Euro STOXX Banks[26] indices.

Dexia had ambitious plans in the Netherlands, and took over Bank Labouchère from the Dutch insurer Aegon in August 2000 at the height of the market. On top of this, in 2001 the business bank Kempen & Co was bought and removed from the stock market for about €1 billion. The two acquired companies Labouchère and Kempen & Co were merged into Dexia Netherlands. This merger had to be undone however, because of an asset leasing affair that threatened to damage the reputation of Kempen & Co.

The asset leasing affair left Dexia in The Netherlands in the end with so much negative publicity that it decided to reduce its Dutch activities. In 2004 Kempen & Co was sold for about €85 million, a fraction of the buying price, to its management, the Friesland Bank, NPM Capital and HAL Investments.

Dexia Bank Netherlands still continues to unwind asset leasing contracts under the commercial name of Legio Lease, and the corresponding agreements and court cases.[29] Dexia suffered a substantial loss in March 2008, after a ruling from the Supreme Court on the legality of leasing contracts, in which contracts were considered invalid for married couples of which both partners had not signed the contract. Dexia as a consequence had to repay these debts plus accrued interests. Luckily for Dexia many customers had previously agreed to a less favourable Duisenberg-agreement and could not revoke this. Eventually only 3,000 of the hundreds of thousands of Legiolease customers profited from this ruling of the High Council.

According to research[30] of Netwerk Vlaanderen Dexia in 2005 together with AXA, Fortis, ING and KBC invested over €6.6 billion in companies that were involved in human rights violations. The companies and projects in which banks invest are controversial because of their support for dictatorial regimes, forced displacements and forced labour. The criticism concerns among others investments in a gas pipe line in Myanmar and the BTC pipe line through Turkey, Azerbaijan and Georgia. In 2005 Dexia announced a new policy concerning the weapons industry. Companies involved in the production of anti-personnel mines will be completely barred from banking services. For investment funds there is no limitation of investments in the weapons industry.[31]

Dexia did on the other hand rank 17th in 2011 on the list of 'The Global 100 Most Sustainable Corporations in the World'.[32] Dexia was the third company from the financial sector on the list.

Through its Israeli subsidiary, Dexia operates in certain Israeli settlements in the Occupied Territories. Several Belgian and French NGOs mounted campaigns to attract attention to this.[33] Leading ultimately in 2011 to concrete plans to sell the Israeli division.[34]

After his forced departure in October 2008, CEO Axel Miller was contractually entitled to a 'golden parachute' of €3.7 million. This provoked protest from the French president Nicolas Sarkozy, and Miller subsequently renounced his bonus, leaving the matter to "the wisdom of the Board of Directors". The board eventually decided to pay him one year's salary (€825,000), thus ignoring Sarkozy's remarks.

The French Ministry of Finance stated in April 2009 that it had voted against the payout, but that its representatives on the board were outnumbered.[35]

Axel Miller's successor, Pierre Mariani, close to Nicolas Sarkozy, obtained a salary that is 30% higher than that of Miller.

Within Dexia Crédit Local, the French component of Dexia group, an pool of €8 million was dedicated to the bonuses of the leading managers, mainly directors. The management indicated that the sum would be shared among 400 to 765 employees.[36]

Philippe Rucheton, the financial director appointed by Dexia in April 2009, coming from Société Générale, received a welcome bonus of €500,000.[37]

In 2010 Dexia announced its plan to provide CEO Pierre Mariani with a bonus of €600,000. For Jean-Luc Dehaene a remuneration was planned of €88,000. The allotment of high bonusses at Dexia and competitor KBC caused some commotion in Belgium. Leading the city of Ghent to remove some €30 million in short term investments from Dexia and KBC.[38]

As of December 2009, the company's corporate officers were as follows 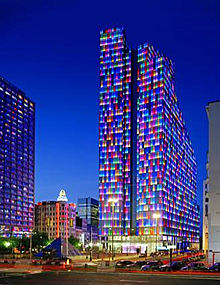 The Dexia Tower in Brussels 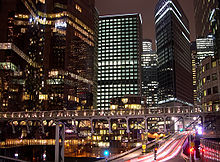 The Tour Dexia at La Défense in Paris

The Dexia Tower, the firm's new head office in Brussels, is with its height of 137m an icon in the business district of Brussels-North. In December 2006 the tower was equipped with LED lighting. A total of 126,000 programmable LED strips have been fitted. From 22 December 2006 to 15 January 2007, the colours of the tower could be chosen by the public from a touchscreen.[40]

The Tour Dexia at La Défense, previously known as the CBX tower, is the bank's Parisian headquarter since 2007.

In Belgium, Dexia is the main sponsor of football club Club Brugge K.V. and of basketball club Dexia Mons-Hainaut.