Banco Comercial Português (BCP) (English: Portuguese Commercial Bank), is a Portuguese bank that was founded in 1985 and is the largest private bank in the country. BCP is a member of the Euronext 100 stock index and its current chief executive officer is Carlos Santos Ferreira. BCP is based in Porto, but its operations are headquartered in Oeiras, Greater Lisbon. It operates a branch brand dubbed and restyled in 2004 as Millennium BCP.

BCP was founded in 1985 by Jardim Gonçalves and a group of investors from the Porto region.

Since 2004, it operates a branch brand dubbed and restyled as Millennium BCP, following a process of amalgamating all the brand names and complete incorporation of all commercial structures of the group's retail banking:

On 25 October 2007, a smaller Portuguese bank, BPI - Banco Português de Investimento ("Portuguese Investment Bank") offered a merger with BCP. The board of BCP initially refused as long as terms were not be revised. The merger talks failed and the two banks didn't reach an agreement.

The Canadian division of BCP Bank was purchased and taken over by the Bank of Montreal (BMO) in the Summer of 2007. All branches in Canada remained BCP Bank branches until October 2007, when they were all fully converted into BMO branches. These branches continue to operate as specialty branches to the Portuguese including Azorean communities in Toronto, Ontario, except the Dundas Street West and University Avenue branch, which has turned towards the Chinese community. 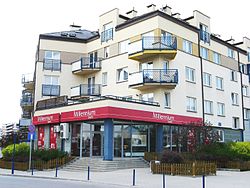 A branch of Bank Millennium in Poland

Bank Millennium is BCP's network of branches in Poland. Bank Millennium was founded in 1989 when the Polish free market and democratic political transformations started. The bank was the first financial institution quoted on the Warsaw Stock Exchange (1992) and gained its present scale through mergers with other banks (in 1992 and 1997), as well as organic growth supported by the new business model, which has been developed in co-operation with its owner - the Portuguese bank Millennium BCP, which holds 65.5% of its shares. Bank Millennium, together with its subsidiaries in Poland, provides specialized financial services such as leasing, brokerage, and mutual funds, which makes it one of the largest banking groups in Poland.

In 2007, Millennium BCP faced turmoil amid probes of its accounts by Portuguese financial crime investigators, the central bank (BdP - Banco de Portugal) and stock market authorities (CMVM - Comissão do Mercado de Valores Mobiliários). The preliminary findings of an investigation by the CMVM stock market authority alleged the existence of several off-shore companies which Millennium BCP could have used to buy its own shares when it increased its capital in 2000 and 2001. The investigations were launched as a result of a complaint by a leading shareholder, José "Joe" Berardo, who owns 6.8% of the bank. He provided crime investigators with documents which, he alleged, showed that several offences had been committed. The documents provided by Berardo are said to prove various cases of fraud committed by various members of past boards of directors at the bank. The Economic Corruption and Financial Crime Investigative Committee, Direcção-Central de Investigação da Corrupção e Criminalidade Económica e Financeira (DCICCEF), was also to call Berardo, former temporary CEO Filipe Pinhal, former Chairman Jardim Gonçalves, shareholder Goês Ferreira, and former ousted CEO Paulo Teixeira Pinto, amongst others, to give or answer to evidence.