Oeiras (Portuguese pronunciation: [oˈɐjɾɐʃ]) is a town and a municipality in western Lisbon Metropolitan Area, Portugal. It is in conurbation with Lisbon, the parish population is 34,850, and the entire Oeiras Municipality has 168,475 inhabitants. The town (vila) of Oeiras is one of the most populous towns in Portugal. It is located by the end of the Tagus River (rio Tejo) mouth, across from Almada, in the Greater Lisbon subregion.

The parish dates back to the year 1208, when the area was settled by Christians from the north of Portugal. The municipality was founded in 1759 by the Marquis of Pombal, as a reward granted by king José I to his minister for having reconstructed downtown Lisbon after the 1755 Lisbon earthquake, it was at the county that he built a magnificent manor-house, the Palace of the Counts of Oeiras, which still exhibits grand stone staircases, statues, splendid tiles and beautiful gardens with cascades and an aqueduct with arches. Oeiras was once part of a defensive line of maritime fortresses built along the Lisbon coast between the 16th and 17th centuries, including the Saint Lawrence Fort (known as Bugio, rising on a tiny islet in the middle of the River Tagus) and the São Julião da Barra Fort, both examples of the Renaissance military architecture.

Oeiras offers a range of new attractions and sites of interest, from the Fábrica da Pólvora (a former gunpowder factory from the 16th century which has been recovered for leisure and cultural purposes) to the Poets Park (a vast green space with statues of Portuguese poets and writers) and the Palace of the Royal Estate at Caxias, dating from the 18th century and surrounded by wonderful gardens.

Visitors may also benefit from different leisure and sports facilities, such as the sports complex of Jamor, the Maritime Walk (a seaside promenade to link Algés to the Torre beach, still unfinished) or the modern marina at Oeiras, prepared to welcome sixty ships, besides other parks and gardens.

The historical centres of several towns have also been recovered and display monuments and sites of interest in picturesque and pleasant settings, often including good restaurants, as is the case of Paço de Arcos. 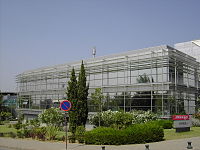 It has several industrial and commercial facilities, being also home of SIC and TVI, two leading private Portuguese television networks. Many large multinational companies have offices in Oeiras making it one of the wealthiest municipalities in Europe. NetJets Europe is headquartered there. Nestlé, Microsoft, Cisco, General Electric and Nokia are other companies that have facilities in the area, among many others. MIPS Technologies bought in 2007 the Oeiras-based company Chipidea. It is also well known by Taguspark (a science and technology park), the Jamor (where the National Stadium is located), and also by the Instituto Gulbenkian de Ciência (a private research institution). A major NATO command (Joint Command Lisbon) and a maritime academy - Escola Náutica Infante D. Henrique - are located in the area. The Estação Agronómica Nacional of the Instituto Nacional dos Recursos Biológicos, located also in Oeiras, is a state-run national centre of agrarian research.

Arquiparque - One of the several business parks located in Oeiras. 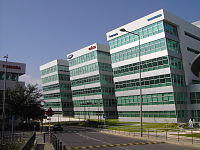 Oeiras is well known by the sprawling office parks along its territory. These host, in most cases, multinational companies. Here is a list of some of them:

The Estoril Open, held at the Estoril Court Central, is a professional tennis tournament that hosts both an ATP (men's) and WTA (women's) event. The event is held in Oeiras but is nominally located in the nearby resort of Estoril by the sport's governing bodies. The men's event was first held in 1990, when the ATP took absolute control of the men's tennis tour and revamped it. In 1998, the first women's event was held, as a component of the ITF women's circuit; a year later, it was promoted to the main WTA Tour. On the men's side, several players who have won the event have also triumphed at the French Open, including Sergi Bruguera, Andrei Medvedev, Thomas Muster, Carlos Moyà, Juan Carlos Ferrero, and Gastón Gaudio. The list of champions also includes two-time finalist Àlex Corretja, Australian Open champion Novak Đoković, Tennis Masters Cup winner David Nalbandian, and, most recently, sixteen-time Grand Slam champion Roger Federer.