In Portugal, municipality (município) or concelho is the most stable subdivision of Portugal since the foundation of the country.

The municipality has been the most stable subdivision of Portugal since the foundation of the country in the 12th century. They have their origin in the foral, a legal document, issued by the king, which assigned privileges to a town or a region. The present subdivisions have their origins in the 19th century.

The concelhos probably formed after the expulsion of the Visigothic rulers by the Moors during the Umayyad conquest of Hispania. Towns were thus left free to govern themselves, the population started to organize in councils (concelhos in Portuguese) in order to govern the town and surrounding lands. These were also a reminder of Roman municipalities.

In 1910, the Republic was instaured in Portugal. By the end of 19th century, the republicans promised a federal organization for the Portuguese territory — that the country would become a municipal republic. However, when the Republic was formed, they did not adopt what they promised for almost half a century.

Traditionally, the north and the autonomous regions are politically more conservative, while the south and the region of Lisbon are dominated by the left.

In 1991, two áreas metropolitanas (meaning "metropolitan areas") were created for the two major cities of the country (Lisbon and Porto). 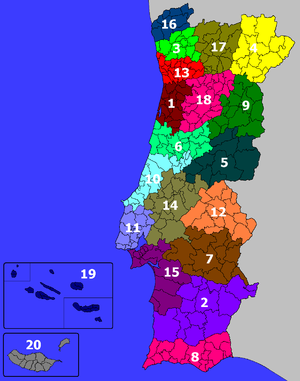 The 18 districts and 2 autonomous regions of Portugal, subdivided into their municipalities.

The biggest municipalities are those located in rural and inland areas where the dominating property type is the latifundia, such as Beja, Évora or Portalegre in the south, and also in other less populated areas, such as Bragança or Castelo Branco.

Denotes the number of inhabitants in the municipality area; area is in km2; only for populations of over 100,000 inhabitants.