The transitional logo used by PNC Financial Services after it finalized the purchase of National City Corp., January 2009 – June 2010.

The National City acquisition by PNC was the deal by PNC Financial Services to acquire National City Corp. on October 24, 2008 following National City's untenable loan losses during the subprime mortgage crisis. The deal received much controversy due to PNC using TARP funds to buy National City only hours after accepting the funds while National City itself was denied funds, as well as civic pride for the city of Cleveland, Ohio, where National City was based.[1]

Both PNC and National City's corporate histories date to the mid-19th century, when National City was founded as the City Bank of Cleveland in 1845 while PNC was founded in longtime Cleveland rival Pittsburgh as the Pittsburgh Trust and Savings Company in 1852. Both banks would later receive national charters under the National Banking Act, with National City being able to print U.S. currency until the United States Treasury assumed operations in the 1920s. Both would have strong bases in their home markets, although PNC would until the 1980s be dwarfed in Pittsburgh by Mellon Bank (now The Bank of New York Mellon) and the massive influence of the Mellon family.

Both banks began interstate expansion in the 1980s, with the two eventually competing in Cincinnati and Louisville by the end of the decade. Although PNC would never enter the Cleveland market on its own before the National City deal, National City did enter Pittsburgh in late 1995 with its acquisition of Pittsburgh-based Integra Bank, putting it in third in market share behind PNC and Mellon, and eventually second after Mellon sold off its retail banking division to RBS-owned Citizens Financial Group in 2001.[2]

The downfall of National City began in 2007 when the United States housing bubble began to burst, and consumers began to default on subprime mortgages, which National City had gotten involved with. Although National City was otherwise healthy on paper, the mortgage business was dragging down profits into losses, with the company CEO even fearing that the bank might fail.[3] National City then put itself up for sale in March 2008.

Adding to the bank's problems, The Wall Street Journal reported on June 6, 2008 that National City had entered into a memorandum of understanding with federal regulators, effectively putting the bank on probation. Terms of the confidential agreement, entered into a month earlier with the Office of the Comptroller of the Currency (which regulates nationally chartered banks), were not known.[4]

On June 10, 2008, National City Corp. confirmed that it had reached agreements with regulators "regarding capital levels, risk-management practices and other aspects of its business." The company stated that there had been no material developments in these areas since these memorandums of understanding were signed in April and May 2008.[5]

By October 2008, National City was in serious sale discussions following the failure of Washington Mutual and the forced sale of Wachovia to Wells Fargo. Among the publicly known front-runners were Minneapolis-based U.S. Bancorp, Toronto-based Scotiabank, and eventual buyer PNC.[1][6] Scotiabank, which has long stayed out of the U.S. market unlike its Canadian rivals, was considered the best option for the local government since Scotiabank didn't have a pre-existing presence in the United States, allowing most of the National City operations to stay in Cleveland. Although National City and PNC had minimal overlap, the close proximity of Cleveland to Pittsburgh meant massive layoffs in both cities. 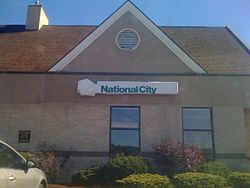 In early October 2008, PNC had offered a deal with National City, but backed out. Combined with Scotiabank's decision to once again not enter the U.S. market, National City began preliminary merger talks with U.S. Bancorp.[1]

The acquisition was a stock purchase transaction completed before the end of 2008. National City will be merged into PNC, and the National City brand is eventually to be dissolved.[8][9]

After the acquisition, PNC conducted a review of National City's balance sheet and took write-offs and reserves of $12.6 billion on the loan portfolio, indicating how severe the problems were at National City.[10]

While some Clevelanders didn't like the fact that National City was being taken over by a Pittsburgh-based rival because of the longstanding NFL rivalry between the two cities,[11] many of the reactions to the PNC-National City deal involved the fact that TARP funds were used by PNC to buy National City.

U.S Representative Dennis Kucinich of Cleveland unsuccessfully fought against the merger, arguing that National City's TARP funds application was never seriously considered, PNC actually took National City's own allotment of TARP funds in addition to its own, and the effects on the local economy.[12][13] In addition, National City was the only one of the 25 largest U.S. banks eligible to receive TARP funds to be denied TARP funds, with Omaha, Nebraska-based Lauritzen Corporation (ranked 37th nationally) being the next-largest bank denied funds.[13] (Banks owned by foreign companies such as Citizens Financial Group, HSBC Bank USA, and TD Bank, N.A. were automatically disqualified from receiving TARP funds.) Many Cleveland-based local businesses also had an unsuccessful grassroots movement to save National City.[14]

There was also criticism from National City shareholders.[15] The deal was described as a "take-under,"[16] meaning the purchase price was below National City's market value.[17] Shareholders felt that they were being undervalued for their National City stock. Eight National City stockholders received a settlement from PNC on July 31, 2009.[18] Under terms of the settlement, investors dropped their claims in return for the release of more than 400 pages of documents in Delaware State Court.[19]

In the case of Pittsburgh, the two banks had significant overlap to the point it would pose antitrust issues in Western Pennsylvania since both banks had the top two market shares in the Pittsburgh region.[2] As a result, the United States Department of Justice required PNC to sell off 50 National City branches in the Pittsburgh area and 11 more branches in and around Erie to competitors.[21] Wells Fargo, KeyBank, and Fifth Third—which had inquired about acquiring National City as a whole and in the case of Fifth Third had existing branches in Pittsburgh—were all interested in buying the National City branches.[22] JPMorgan Chase, Huntington Bancshares, First Niagara Bank and FNB Corporation were also in discussions for the branches, with Huntington and FNB, like Fifth Third, having existing branches in Pittsburgh.

On April 7, 2009, PNC reached a deal with Buffalo-based First Niagara Bank to buy 57 of the branches.[23] First Niagara officially took over those branches on September 8 after the signs were changed over from National City during Labor Day Weekend.[24] The branches not purchased by First Niagara were the four in Crawford County, Pennsylvania that PNC had to divest; of those four, one branch in Titusville was sold to Emclaire Financial Group[25] while the other three (one in Conneaut Lake, the other two in Meadville, including the branch inside Wal-Mart) were sold to Marquette Savings Bank.[26] Although employees at the branches being sold off were retained (First Niagara, in fact, established a regional office in Pittsburgh at 11 Stanwix Street near National City's Pittsburgh headquarters at 20 Stanwix Street, adding more jobs there.),[23] there were still heavy layoffs at National City's headquarters in Cleveland.

Because of the significant overlap in Pittsburgh that remains, PNC closed seven National City branches & five PNC branches on November 6, 2009, and later closed two more PNC branches on April 23, 2010, with the accounts at those branches being moved to the nearby PNC branch that will remain.[27] As part of the agreement to buy the 57 National City branches from PNC, First Niagara has the right of first refusal to buy the National City branches PNC closes.[28] Despite the branch closures and the sale of others to First Niagara, PNC still ended up with a 46% market share in Pittsburgh,[29] over three and a half times the market share of second-place Citizens Financial Group with 13%.[23]

Although experts[30] had expected more TARP funds to be used by stronger banks to buy out weaker rivals, no more deals were ultimately done involving TARP funds.

The National City name, as expected, lasted well into 2009 since it would take PNC some time to integrate the two banks together.[31] PNC began to phase out the National City name in favor of PNC on November 7, 2009,[28] starting with Pennsylvania (where the two had the most overlap), Florida, and the Youngstown & Steubenville, Ohio regions.[29] That day also saw the rebranding of National City Mortgage into PNC Mortgage and NatCity Investments fully merged into PNC Investments. In addition, National City's bank charter was merged into PNC's, effectively having the retail banking branches having yet to convert being legally known as PNC Bank, N.A., d/b/a National City Bank.[32]

The conversion of National City to PNC was completed in June 2010, in the following phases:[32]

Despite becoming the largest bank in Ohio upon acquiring National City, PNC has since slipped to second-largest in the state behind Fifth Third Bank, and is neck-and-neck with third place Huntington Bancshares for the second-place spot. Much of the losses for PNC came in Cleveland, where many Clevelanders left PNC upon the April 2010 conversion of National City in the area for other banks, most notably KeyBank, which became the Cleveland market's largest bank by deposits. While National City was Cleveland's top bank at the time of PNC's acquisition, PNC slipped to fourth overall in the area behind KeyBank, locally-owned Third Federal Savings & Loan, and Citizens Financial Group's Charter One brand. PNC has, however, been able to regain some of the losses back, and is currently second in the Cleveland market behind KeyBank.[39]

Outside of Greater Cleveland, PNC's acquisition of National City has been considered a success by experts.[40] The move allowed PNC to experience growth in Chicago, and was able to use the Florida footprint acquired from National City to expand in the Southern United States. In 2011, PNC expanded its Florida presence by acquiring branches from BankAtlantic in the Tampa Bay Area, and is currently in the process of acquiring RBC Bank from the Royal Bank of Canada as well as the Atlanta-area branches of Flagstar Bank. Within Cleveland, PNC opened a museum dedicated to the history of National City within National City's former headquarters in Cleveland.[41]

PNC ultimately paid back its TARP funds in full in February 2010 while the National City conversion was still underway. However, it required the bank to sell its Global Investment Servicing division to BNY Mellon in order to have the funds to buy back its shares.[42]