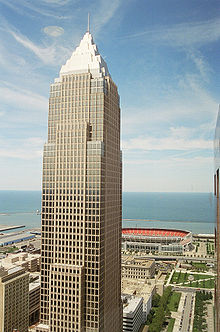 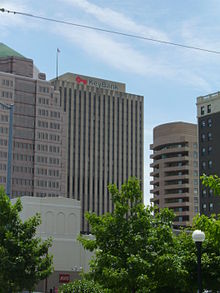 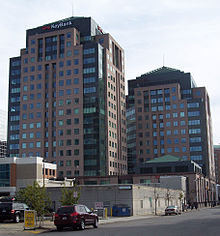 KeyBank National Association is a nationally chartered bank, regulated by the Office of the Comptroller of the Currency, Department of the Treasury.

KeyBank also has several major sub-headquarters throughout Ohio; these are located in Cincinnati, Columbus, and Dayton. KeyBank recently took naming rights to the former MeadWestvaco Tower in Dayton, Ohio which is now named KeyBank Tower.

With RBS-owned Citizens Financial Group acquiring Charter One Financial in 2004 (though the latter retained its name in most areas under Citizens ownership) and the acquisition of National City by PNC Financial Services in 2008, KeyBank remains the only major bank based in Cleveland.

The company owns the naming rights to KeyArena in Seattle, Washington. On April 11, 1995, the city of Seattle sold the naming rights to KeyCorp for $15.1 million, which renamed the Coliseum as KeyArena. Now that KeyArena has lost its major tenant, there has been speculation that KeyCorp may try to amend or back out of the naming rights deal.[5] However, in March 2009, the city and KeyCorp signed a new deal for a two-year term that ended December 31, 2010, at an annual fee of $300,000.[6]

KeyBank is owned by KeyCorp (NYSE: KEY), which was formed in 1994 through the merger of Society Corp. of Cleveland ("Society Bank") and KeyCorp ("Old KeyCorp") of Albany, New York. The merger would briefly make Key the 10th largest U.S. bank. Its roots trace back to Commercial Bank of Albany, NY in 1825 and Cleveland's Society for Savings, founded in 1849. The current record shows estimated employee size 250 - 499 at Albany.

Society Corp. originated in Cleveland, Ohio, as a mutual savings bank in 1849 by Samuel H. Mather named the Society for Savings. In 1867, the modest but growing bank would build Cleveland's first skyscraper, a 10-story building on Public Square. Despite the erecting the tallest structure between New York and Chicago at the time, the bank remained extremely conservative. That aspect is highlighted by the fact bank when it celebrated its 100 year anniversary in 1949, it still only had one office although it had over $200 million in deposits. This conservatism helped the bank sidestep the numerous depressions and financial panics. In 1958, Society would convert from a mutual to a public company, which enabled it to grow quickly by acquiring 12 community banks between 1958 and 1978. It would go through another growth spurt from 1979 to 1989, as it swallowed dozens of small banks and completed four mergers worth one billion-dollar, most notably Cleveland-based Central National Bank in 1986. In 1987, Society CEO Gordon E. Heffern retired and was succeeded as Robert W. "Bob" Gillespie, who, although just 42, was a major figure and part of the office of the chairman for more than 5 years.[7] A year later, Gillespie would add the title of chairman. Gillespie started as a teller with Society to earn money while he was finishing his graduate studies.[8]

In the 3 years leading up to the KeyCorp merger, Society acquired Toledo-based Trustcorp in 1990 and Ameritrust in September 1991, a venerable Cleveland bank formerly known as Cleveland Trust. The Ameritrust deal put Society on the map as a large regional bank. The jewel of Ameritrust was its robust personal and corporate trust businesses. However, its footing became unsteady due to bad real estate loans, forcing the resignation of Ameritrust chairman Jerry V. Jarrett in 1990. Moreover, Gillespie was able to "one-up" its larger up-the-street archenemy, National City Bank, which also bid for Ameritrust.[9] Gillespie would make the deal with Key to catapult both regional banks into the big leagues.

Riley embarked on a plan to grow Key through acquisitions. From the mid-1970s to early 1980s, it grew but largely remained in upstate New York. Beginning in the 1980s, Riley looked outside New York, expanding the footprint with an acquisition in Maine. However, by the mid-1980s, the state banking regulators within New England began to scoff at the idea of New York banks controlling their capital. That, coupled with increasing competition for acquisition targets, caused Riley to essentially abandon the Northeast. Instead, he began searching for prey in the Pacific Northwest. Riley found a target-rich environment in rural and underserved areas. He snapped up small banks in Wyoming, Idaho, Utah, Washington and Oregon. He even went so far as to buy two banks in Alaska, for which he was flogged in the media and in banking circles. Unorthodox strategy aside, Riley quintupled Key's assets from $3 billion to $15 billion in just four years between 1985 and 1990.

While the early 1990s recession rocked many banks, Key had ample capital. In fact, it would buy the assets of two failed thrifts from the government: Empire Federal Savings and Loan and Goldome Savings Bank. Once the recession passed, Key returned to the hunt, mostly tuck-in deals within its existing footprint. For instance, in March 1992, it bought Tacoma-based Puget Sound Bancorp for $807.2 million to bolster its presence in Washington. [11] Also in 1992, Key acquired Home Federal Savings of Fort Collins, its first move into Colorado. Key soon amassed nearly 700 banking offices.[12]

By 1993, the rural strategy with local management and minimal technology made Key a very profitable bank. However, it was getting tougher for Riley and CFO William Dougherty to maintain their 15 percent return on equity target and investors were cooling on Key stock after many high growth years. Accordingly, Key began testing a Vision 2001 computer system, which would speed up and enhance the loan process through faster credit scoring, loan servicing and collection capabilities.

The two held talks in 1990 at Gillespie's prompting, but Riley decide to stay the course of smaller, more lucrative acquisitions with obvious synergies. Yet, news reports swirled that a possible merger was in the works in the fall of 1993. At the time, Key was the 25th largest U.S. bank with $32 billion in assets, while Society was the 29th largest with $26 billion in assets.[13] By all accounts, both needed a game-changing merger to improve their prospects. Without an heir apparent and at age 62, Riley and Key needed a definitive management succession plan. In one week in June 1993, the bench had become quite barren. Chief Banking Officer James Waterston, hired the year before, quit and publicly stated that he was frustrated the pace of achieving his goal of running a large bank. The head of KeyBank of Washington, Hans Harjo, was pushed out over an apparent dispute to move its headquarters from Seattle to Tacoma. [14] Additionally, it was becoming clear that Key would have to undertake a massive technology infrastructure upgrade to connect its far-flung footprint. Meanwhile, Society was in search of higher growth and longed to expand its presence outside of the so-called rust belt states of Ohio, Michigan, and Indiana.

The merger was announced in early October 1993. This time, it was Riley who made the first move. Recuperating at his Albany home after breaking his hip in a horse riding accident in Wyoming, Riley called Gillespie directly. The two quickly sketched out the deal. Since the banks were roughly the same size in assets and had very little geographic overlap, the transaction was trumpeted as an out-of-market merger of equals. It would create a $58 billion banking behemoth with a footprint that literally stretched from Portland, Maine to Portland, Oregon. Furthermore, the deal would plug many of the perceived holes for both partners. [15] The soft-spoken Gillespie was just 49 and Society had cultivated a deep bench of lieutenants. More importantly, Society had the existing computer systems and technology expertise to pull together the necessary task of combining the new bank, along with capable tech boss Allen J. Gula.[16] Riley also lamented the modest Albany International Airport, which lost service from several major airlines in the mid-to-late 1980s and complicated air travel for Key execs. Ohio also had lower state taxes than New York. Lastly, Society had recently built a sparkling new, 57-story headquarters that was more commensurate with a big bank than the modest buildings used in Albany. These issues made Cleveland the more preferable location for the new headquarters. Conversely, Key's brand was more recognizable. Thus, while the old Key was the nominal survivor, the merged company was headquartered in Cleveland.

Following the merger, Riley would become chairman and CEO of the new KeyCorp and Gillespie would be president and chief operating officer. Despite assurances from both Riley and Gillespie, the city of Albany and then-Governor Mario Cuomo openly fretted that the merger would be bad for the state capital since Key and its subsidiaries owned or leased more than 10 percent of Albany's commercial office space.[17]

After regulatory approval, Society and Key completed the merger on March 1, 1994. From the outset, the integration would be daunting and promised little expense reduction given the complexities and few synergies. Wall Street analysts were puzzled.[15] Regardless, Key-Society were an odd couple. Key was a decentralized rural community bank in many states, while Society was a big city commercial bank with a centralized structure largely concentrated in three states.

Riley planned to retire as CEO at the end of 1995, to a newly built home in Cody, WY, near Yellowstone National Park.[18] However, he decided to accelerate it by 4 months, instead stepping-down on September 1, 1995. Gillespie took the helm as CEO and later chairman, allowing his protege Henry Meyer to become COO and later president. 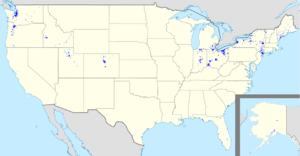 Despite still integrating the major merger, Gillespie attempted to turn Key into a financial services powerhouse. Between 1995 and 2001, Gillespie initiated 9 significant acquisitions and 6 divestitures. [19]

In late 1998, Key bought hometown regional brokerage firm, McDonald & Co. for $580 million in an all-stock transaction.[20] The McDonald acquisition was the largest non-banking deal in both size and impact on Key. But, McDonald was eventually sold to the U.S. investment arm of Swiss banking giant UBS AG in 2007 for roughly $280 million.[21] As a result, Key began processing all subsequent securities transactions under its new broker-dealer name, "KeyBanc Capital Markets Inc", in April 2007.[22] Rrtgg However, investors were becoming wary of all the Gillespie-era deals. In fact, some believed that Gillespie was making all the moves to cover up poor performance, although in hindsight that appears to be far from truth. The concept was dubbed "burning the furniture," implying that Key would sell an asset to obfuscate earnings. For instance, Key sold its residential mortgage servicing to Countrywide Financial in 1995, shareholder services in 1996, various chunks of the bank in 1997-1999 (i.e. Wyoming, Florida, and Long Island), and credit card operations to The Associates in 2000 (which would quickly thereafter be swallowed by Citigroup).

But Gillespie was attempting to increase fee-income by acquiring high-growth businesses (like McDonald and equipment financing firm Leastec) and decreasing the exposure to the bank's shrinking population base in its primary footprint, so-called rust belt states such as Ohio, Michigan, and Indiana. Gillespie stepped down as CEO on February 1, 2001, and then as chairman at the annual meeting on May 17. That would usher in the Henry Meyer era.

In October 2008, Key received approximately $2.5 billion in TARP funds, which its Chairman boasted would be used in part to grow even larger.[23] After the announcement, KeyBank was rumored to be buying branches of longtime crosstown rival National City from PNC Financial Services after PNC bought National City with its own allotment of TARP funds after National City became a victim of the subprime mortgage crisis. The branches would have mostly been in the Pittsburgh market (as well as a handful in the Erie market), where PNC and National City had the number 1 and 2 positions respectively in market share and would have caused antitrust problems. PNC was forced to sell the overlapping branches by order of the United States Department of Justice as a condition of buying National City. If Key bought the branches, it would have entered Western Pennsylvania which borders Ohio and the markets Key currently serves such as Youngstown, Ohio.[24] Ultimately, PNC sold the overlapping branches to First Niagara Bank.