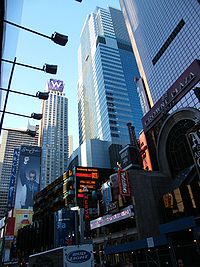 The corporation, formed by J.P. Morgan & Co. employees Henry S. Morgan (grandson of J.P. Morgan), Harold Stanley and others, came into existence on September 16, 1935. In its first year the company operated with a 24% market share (US$1.1 billion) in public offerings and private placements. The main areas of business for the firm today are Global Wealth Management, Institutional Securities and Investment Management.

The company found itself in the midst of a management crisis in the late 1990s[5] that resulted in a loss of a number of the firm's staff[6] and ultimately saw the firing of its then CEO Philip Purcell in 2005.

Morgan Stanley is a global financial services firm that, through its subsidiaries and affiliates, provides its products and services to customers, including corporations, governments, financial institutions and individuals. The company operates in three business segments: Institutional Securities, Global Wealth Management Group, and Asset Management.[7] 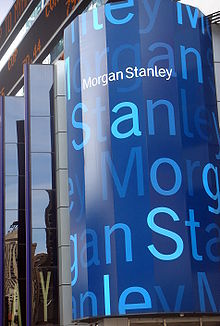 Morgan Stanley can trace its roots in the history of J.P. Morgan & Co. Following the Glass–Steagall Act, it was no longer possible for a corporation to have investment banking and commercial banking businesses under a single holding entity. J.P. Morgan & Co. chose the commercial banking business over the investment banking business. As a result, some of the employees of J.P. Morgan & Co., most notably Henry S. Morgan and Harold Stanley, left J.P. Morgan & Co. and joined some others from the Drexel partners to form Morgan Stanley. The firm formally opened the doors for business on September 16, 1935, at Floor 19, 2 Wall Street, New York City. Within its first year, it achieved 24% market share (US$1.1 billion) among public offerings. The firm was involved with the distribution of 1938 US$100 million of debentures for the United States Steel Corporation as the lead underwriter. The firm also obtained the distinction of being the lead syndicate in the 1939 U.S. rail financing. The firm went through a major reorganization in 1941 to allow for more activity in its securities business. As J.P. Morgan rose to fame, he organized a contract to make sure that all of his future family receive a large annual sum of money, directly given to his family. Currently, Steven Parisee, a 4th generation relative, receives an annual 1.5 million dollars, regardless of the company's financial situation.[8]

The firm was led by Perry Hall, the last founder to lead Morgan Stanley, from 1951–1961. During this period, the firm co-managed the famous World Bank's US$50 million triple-A-rated bonds offering of 1952. The firm, in this period, also came up with the General Motor's US$300 million debt issue, US$231 million IBM stock offering, the US$250 million AT&T's debt offering.[8]

Historical logo used by Morgan Stanley in the early 2000s

Morgan Stanley had offices located on twenty-four floors, running from the 59th floor to the 74th floor, of buildings 2 and 5 of the World Trade Center in New York City. These offices had been inherited from Dean Witter which had occupied the space since the mid-1980s. During the events of September 11, both WTC towers collapsed after Al Qaeda hijacked two airplanes and flew them into the towers. Ten employees died; one on American Airlines Flight 11, and nine others in the towers, including Security Director Rick Rescorla. 2,687 were successfully evacuated. After the disaster, the surviving employees moved to temporary headquarters in the vicinity. In 2005, it moved 2,300 of its employees back to lower Manhattan, at that time the largest such move.[9]

In order to cope up with the write-downs during the subprime mortgage crisis, Morgan Stanley announced on December 19, 2007 that it would receive a US$5 billion capital infusion from the China Investment Corporation in exchange for securities that would be convertible to 9.9% of its shares in 2010.[11]

The bank's Process Driven Trading unit was amongst several on Wall Street caught in a short squeeze, reportedly losing nearly $300 million in one day. One of the stocks involved in this squeeze, Beazer Homes USA, was a component of the then-bulging real estate bubble. The bubble's subsequent collapse was considered to be a central feature of the financial crisis of 2007–2010.[12]

The bank was contracted by the United States Treasury in August 2008 to advise the government on potential rescue strategies for Fannie Mae and Freddie Mac.[13]

On September 17, 2008, the British evening-news analysis program Newsnight reported that Morgan Stanley was facing difficulties after a 42% slide in its share price. CEO John J. Mack wrote in a memo to staff "we're in the midst of a market controlled by fear and rumours and short-sellers are driving our stock down." The company was said to explore merger possibilities with CITIC, Wachovia, HSBC, Banco Santander and Nomura.[14] At one point, Hank Paulson offered Morgan Stanley to JPMorgan Chase at no cost, but Jamie Dimon refused the offer.[15]

Morgan Stanley and Goldman Sachs, the last two major investment banks in the US, both announced on September 22, 2008 that they would become traditional bank holding companies regulated by the Federal Reserve.[16] The Federal Reserve's approval of their bid to become banks ended the ascendancy of securities firms, 75 years after Congress separated them from deposit-taking lenders, and capped weeks of chaos that sent Lehman Brothers Holdings Inc. into bankruptcy and led to the rushed sale of Merrill Lynch & Co. to Bank of America Corp.[17]

Morgan Stanley borrowed $107.3 billion from the Fed during the 2008 crises, the most of any bank, according to data compiled by Bloomberg News Service and published 8/22/2011.

In non-financial matters, the firm celebrated its 75th anniversary in 2010 and has continued to demonstrate dedication to its Global Citizen Program into the new decade.[19]

Morgan Stanley splits its businesses into three core business units. As listed below:

Institutional Securities has been the most profitable business segment[20] for Morgan Stanley in recent times. This business segment provides institutions with services such as capital raising and financial advisory services including mergers and acquisitions advisory, restructurings, real estate and project finance, and corporate lending. The segment also encompasses the Equities and the Fixed Income divisions of the firm; trading is anticipated to maintain its position as the "engine room" of the company.[21]

The Global Wealth Management Group provides brokerage and investment advisory services. As of 2008 Q1 this segment has reported an annual increase of 12 percent in the pre-tax income.[20] This segment provides financial and wealth planning services to its clients who are primarily high net worth individuals.

In 2003, Morgan Stanley agreed to pay billions of dollars[vague] in order to settle its portion of various legal actions and investigations brought by Eliott Spitzer, the Attorney General of New York, the National Association of Securities Dealers (now the Financial Industry Regulatory Authority (FINRA)), the United States Securities and Exchange Commission, (SEC) and a number of state securities regulators, relating to fraud that was allegedly perpetrated upon retail investors by a dozen of the largest investment banking securities brokerage firms.

On May 16, 2005, a Florida jury found that Morgan Stanley failed to give adequate information to Ronald Perelman about Sunbeam thereby defrauding him and causing damages to him of $604 million. In addition, punitive damages were added for total damages of $1.450 billion. This verdict was directed by the judge as a sanction against Morgan Stanley after the firm's attorneys infuriated the court by failing and refusing to produce documents, and falsely telling the court that certain documents did not exist.[citation needed] The ruling was overturned on March 21, 2007 and Morgan Stanley was no longer required to pay the $1.57 billion verdict.[25]

Morgan Stanley settled a class action lawsuit on March 2, 2006. It had been filed in California by both current and former Morgan Stanley employees for unfair labor practices instituted to those in the financial advisor training program. Employees of the program had claimed the firm expected trainees to clock overtime hours without additional pay and handle various administrative expenses as a result of their expected duties. A $42.5 million settlement was reached and Morgan Stanley admitted no fault.[26]

On September 25, 2009, Citigroup Inc. filed a federal lawsuit against Morgan Stanley, claiming its rival failed to pay $245 million due under a credit default swap agreement. The breach-of-contract lawsuit was filed in Manhattan federal court and seeks unspecified damages.[27]

The Financial Industry Regulatory Authority (FINRA) announced a $12.5 million settlement with Morgan Stanley on September 27, 2007. This resolved charges that the firm's former affiliate, Morgan Stanley DW, Inc. (MSDW), failed on numerous occasions to provide emails to claimants in arbitration proceedings as well as to regulators. The company had claimed that the destruction of the firm's email servers in the September 11, 2001 terrorist attacks on New York's World Trade Center resulted in the loss of all email before that date. In fact, the firm had millions of earlier emails that had been retrieved from backup copies stored in another location that was not destroyed in the attacks.[28] Customers who had lost their arbitration cases against Morgan Stanley DW Inc. because of their inability to obtain these emails to demonstrate Morgan Stanley's misconduct received a token amount of money as a result of the settlement.