The Credit Suisse Group AG (SIX: CSGN, NYSE: CS) is a Swiss multinational financial services company headquartered in Zurich, with more than 250 branches in Switzerland and operations in more than 50 countries.

In 1942, it opened its first branch outside of Switzerland, in New York City.

In 1988, it gained a controlling stake in The First Boston Corporation and in 1993, Credit Suisse Group bought Schweizerische Volksbank (English: People's Bank of Switzerland). In 1996 the two retail banks were merged and renamed Credit Suisse.

In 2000, it acquired the investment bank Donaldson, Lufkin & Jenrette (DLJ) and, with it, an e-commerce software portfolio, including DLJ Direct, that it later sold to the Bank of Montreal.

In 2009, Credit Suisse was recognized as "Bank of the Year" by the International Financing Review.[citation needed]

Credit Suisse is considered to be within the prestigious "bulge bracket" of investment banks.[2]

The firm earned accolades throughout the recent financial crises for prudent risk management and strategic allocation of capital. It is one of the few major international banks to weather the crisis[clarification needed] without any direct government support.[citation needed]

July 2011, Credit Suisse cut 2,000 jobs from their worldwide staff of 50,700 employees in order to maximize cost efficiencies across the bank. This was in response to weaker than expected recovery in the US and Europe that had led them to hire too aggressively in the aftermath of the credit crisis in an effort to take market share from weakened rivals. .[4]

The bank is organized into three divisions, Investment Banking, Private Banking, and Asset Management. Shared Services, which includes functions such as IT, marketing and legal/compliance, encompasses all three major areas. On January 16, 2006, Credit Suisse First Boston (CSFB), now the Investment Banking division, Credit Suisse Asset Management (CSAM), and Credit Suisse Private Banking (CSPB), re-branded themselves, becoming collectively known as Credit Suisse. This move was initiated to better leverage each others' resources and capabilities to create a "One Bank" brand and effort. 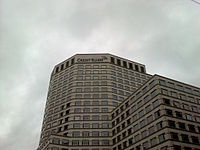 The Credit Suisse business unit is a provider of wide-ranging financial services in Europe and other selected markets. It offers investment products, private banking and financial advisory services for private and corporate clients. Credit Suisse was founded by Alfred Escher.

This division used to be known as Credit Suisse First Boston. It is active in investment banking, capital markets and financial services. It is a member of the prestigious bulge bracket of securities firms.

Until 2006 this division was known as Credit Suisse Private Banking or CSPB.

The CIO of Credit Suisse is Karl Landert, located in Zurich, Switzerland.

Credit Suisse was one of Swiss F1 team Sauber's majority shareholder between 2001 and 2005 and then a sponsor between 2006 and 2009 when the team was known as BMW-Sauber.

Credit Suisse is sponsor of the Switzerland national football team and Roger Federer.

Lloyds Banking Group, Barclays, and several other banks were involved with similar information stripping scandals around the same time as Credit Suisse.[13]