Credit rating of governments around the world by Standard & Poor's:
AAA
AA
A
BBB
BB
B
not rated

Credit ratings are often confused with credit scores. Credit scores are the output of mathematical algorithms that assign numerical values to information in an individual's credit report. The credit report contains information regarding the financial history and current assets and liabilities of an individual. A bank or credit card company will use the credit score to estimate the probability that the individual will pay back loan or will pay back charges on a credit card. However, in recent years, credit scores have also been used to adjust insurance premiums, determine employment eligibility, as a factor considered in obtaining security clearances and establish the amount of a utility or leasing deposit.

A poor credit rating indicates a credit rating agency's opinion that the company or government has a high risk of defaulting, based on the agency's analysis of the entity's history and analysis of long term economic prospects. A poor credit score indicates that in the past, other individuals with similar credit reports defaulted on loans at a high rate. The credit score does not take into account future prospects or changed circumstances. For example, if an individual received a credit score of 400 on Monday because he had a history of defaults, and then won the lottery on Tuesday, his credit score would remain 400 on Tuesday because his credit report does not take into account his improved future prospects.

An individual's credit score, along with his credit report, affects his or her ability to borrow money through financial institutions such as banks.

The factors that may influence a person's credit score are:[2]

In the United States, an individual's credit history is compiled and maintained by companies called credit bureaus. Credit worthiness is usually determined through a statistical analysis of the available credit data.

In Canada, individuals receive credit ratings such as the North American Standard Account Ratings, also known as the "R" ratings, which have a range between R0 and R9. R0 refers to a new account; R1 refers to on-time payments; R9 refers to bad debt.

In Australia, The Australian Government Office of the Privacy Commissioner provides information on how to obtain a copy of your credit report. Personal credit reports in Australia are generally required to be given free of charge. 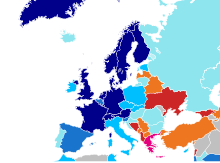 A. M. Best defines "country risk"[8] as the risk that country-specific factors could adversely affect an insurer's ability to meet its financial obligations.

A short-term rating is a probability factor of an individual going into default within a year. This is in contrast to long-term rating which is evaluated over a long timeframe. In the past institutional investors preferred to consider long-term ratings. Nowadays, short-term ratings are commonly used. First, the Basel II agreement requires banks to report their one-year probability if they applied internal-ratings-based approach for capital requirements. Second, many institutional investors can easily manage their credit/bond portfolios with derivatives on monthly or quarterly basis. Therefore, some rating agencies simply report short-term ratings.

In the United States, the main credit bureaus are Experian, Equifax, and TransUnion. A relatively new credit bureau in the US is Innovis.[9]

In the United Kingdom, the main credit reference agencies for individuals are Experian, Equifax, and Callcredit. There is no universal credit score as such, rather each individual lender credit scores based on its own wish-list of a perfect customer.[10]

In Canada, the main credit bureaus for individuals are Equifax and TransUnion.[11][12]

On July 14, 2010, Dagong Global Credit Rating Co. from China released a credit rating that is a break with other western credit rating agencies in an attempt to compete with them.[15]

Information and Rating Agency Credo Line is the only Rating Agency in Ukraine which assigns short-term and long-term credit ratings to Ukrainian, CIS and Eastern-European importing companies in the course of their foreign economic activity and trade financing, in particular.