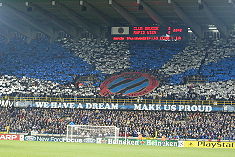 Club Brugge Koninklijke Voetbalvereniging (Dutch pronunciation: [ˈklʏˈbrʏʝə ˈkoː.nɪŋk.lə.kə ˈvud.bɑl.vər.ˌeːnə.ʝɪŋ]) is a football club from Bruges in Belgium. It was founded in 1891 and is one of the top clubs in Belgium. Its home ground is the Jan Breydel Stadium, which has a capacity of 29,042.

Club Brugge's major rival is R.S.C. Anderlecht, and it shares the Jan Breydel Stadium with city rival Cercle Brugge K.S.V., with whom they contest the Bruges derby.

Throughout its long history, Club Brugge has enjoyed much European football success, reaching two European finals and two European semi-finals. Club Brugge is the only Belgian club to have played the final of the European Cup (forerunner of the current UEFA Champions League) so far. They were beaten by Liverpool F.C. in the final of its 1978 season. They also lost in the 1976 UEFA Cup Final to Liverpool. Club Brugge holds the record number of consecutive participations in the UEFA Cup (16).

The club was recreated. This has since been adopted as the official date of foundation.

An official board was installed in the club.

Club created in the city.

The members of FC Brugeois had better connections down the country and they went to the UBSSA and took part of the first Belgian national league.

Financial it was difficult for FC Brugeois and so after only one year they had to leave the UBSSA.

They moved to a new stadium named "De Klokke".

The club became for the first time champions of the first division.

The club get number 3 as their matricule number and in the same year they get the royal titel.

A first low when the club relegated to the second division.

RFC Brugeois promoted to the first division and never relegated again in the future.

They won the Belgian Cup for the first time against Beerschot AC (1–1, 7–6 after penalty's).

They moved from Albert Dyserynckstadion to Olympiastadion (current Jan Breydelstadion).

Under Austrian coach Ernst Happel, Club Brugge reached the finals of the UEFA Cup and lost against Liverpool (3–2 and 1–1).

Still under Ernst Happel, the club faced Liverpool again of a European final. This time it was in the European Champions Clubs' Cup final. And again they lost (1–0). Club Brugge is the only Belgian club that have reached the finals of the European biggest competition.

Daniel Amokachi is the first goal scorer in the Champions League. He scored against CSKA Moskva.

Olympiastadion had to be expand for the EURO 2000 organisation. They also changed the name into Jan Breydelstadion.

It was the first Belgian club who created its own TV channel.

From the quarter-finals upwards:

As of May 30, 2011. Note: Flags indicate national team as has been defined under FIFA eligibility rules. Players may hold more than one non-FIFA nationality.

As of June 6, 2011. Note: Flags indicate national team as has been defined under FIFA eligibility rules. Players may hold more than one non-FIFA nationality.

striker François Sterchele. Sterchele died in a single-person car accident on May 8, 2008.