FC Dinamo Tbilisi (Georgian: თბილისის დინამო) is a Georgian football team, based in Tbilisi, the capital of Georgia.

Dinamo Tbilisi was one of the most prominent clubs in Soviet football and a major contender in the Soviet Top League almost immediately after it was established in 1936. The club was then part of one of the leading sport societies in Soviet Union, the All-Union Dynamo sports society which had several other divisions beside football and was sponsored by the Soviet Ministry of Internal Affairs. Its main claim to European fame was winning the Cup Winners' Cup in 1981, beating FC Carl Zeiss Jena of East Germany 2–1 in the final in Düsseldorf. Throughout its history, FC Dinamo Tbilisi produced many famous Soviet players: Boris Paichadze, Avtandil "Basa" Gogoberidze, Shota Iamanidze, Tengiz Sulakvelidze, Vitali Daraselia, Vladimer Gutsaev, David Kipiani, Mikheil Meskhi, Ramaz Shengelia, Alexandre Chivadze, Slava Metreveli, Murtaz Khurtsilava. After the break-up of the Soviet Union, it would later produce some of the finest Georgian players such as Temuri Ketsbaia, Kakha Kaladze, Shota Arveladze, Giorgi Kinkladze. , FC Dinamo Tbilisi was one of a handful of teams in the Soviet Top League (along with FC Dynamo Moscow and Dynamo Kyiv) that were never relegated. Their most famous coach was Nodar Akhalkatsi, who led the team to the Soviet title in 1978, two Soviet cups (1976 and 1979), and the UEFA Cup Winners' Cup in 1981. He was also assistant coach to the Soviet Union National Team during the FIFA World Cup in 1982. FC Dinamo Tbilisi are also 13-time Georgian league champions and 9-time Georgian Cup holders (the current record).

The history of FC Dinamo Tbilisi began in autumn 1925 when the Dinamo sports society set out to form a football club, at a time when football was gradually becoming one of the most popular sports in the world.

Despite their success in the middle years of the 1930s, the football federation of the Soviet Union placed FC Dinamo Tbilisi in the first league instead of the premier league. Dinamo continued to show good form against the top teams, winning 9–5 in Tbilisi against probably the best team in the USSR championship, Dynamo Moscow. They later beat Dinamo Leningrad 3–2, winning 5 matches out of 6 plus a draw against Stalinec Moscow. This was enough for Dinamo to qualify for the premier league.

The first victory in the USSR championship was in the match against Spartak Moscow on 25 September with Mikheil Berdzenishvili scoring the winning goal. Dinamo finished the season in 3rd place. They challenged for the title, but this faded after the 2–3 loss against Krasnaia Zaria Leningrad. Dinamo also played an unforgettable match in Moscow with Spartak in the SU cup quarterfinal with Dinamo scoring 3 goals in stoppage time, beating Spartak 6–3. They reached the SU Cup Final, but lost 0–2 to Lokomotiv Moscow. Their first international match was against the Spanish team Baskonia in 1937, which Dinamo lost 0–2.

In the 1950s, the team was led by Avtandil Ghoghoberidze who spent 14 years with Dinamo. He still holds the record for games played and goals scored for Dinamo, with 341 matches and 127 goals. In the same period, the following players starred for Dinamo: G.Antadze, V.Marghania, N.Dziapshipa, M.Minaev, A.Zazroev, V.Eloshvili, A.Chkuaseli.

A prominent place in Dinamo history belongs to Andro Zhordania, a coach who is considered as one most important figures in the club's history. His period in charge at the end of the 1950s was seen as "the Renaissance" of Dinamo's traditions, which laid the ground for the major successes connected with his name. FC Dinamo's Digomi practice ground is named after this club legend.

The first major success came in 1964 when Dinamo won the Soviet Union championship, with the team unbeaten in the last 15 matches. At the end, Dinamo was tied with Torpedo Moscow so the teams played an additional match in Tashkent, Uzbekistan which Dinamo won 4–1. Georgian supporters celebrated the victory by naming their team "Golden Guys".

A popular French magazine "France Football" wrote: "the Dinamo team has great players. Their technique, skills and playing intellect enables us to name them the best Eastern representatives of 'South American Football Traditions', if Dinamo were able to participate in the UEFA Champions Cup, we are certain, they would bring the hegemony of Spanish-Italian teams to an end." However, no Soviet team appeared in the Champions Cup at that time.

In 1973, Dinamo won their first International tournament. After beating Athletic Madrid and Benfica, one of the best teams of the time, Dinamo won the Columbus's Caravela Trophy.

In 1976, Nodar Akhalkatsi (a future President of the Georgian Football Federation) was appointed as Dinamo's head coach. It was under his leadership that the team achieved their greatest success with Dinamo. The club was referred to as the "Great Team" between 1976–1982, characterised by a mobile, fast and technical style of play.

In this period, Dinamo won the Soviet Cup title in 1976, defeating Ararat Erevan (Armenia) 3–0 with goals scored by David Kipiani, Piruz Kanteladze (penalty) and Revaz Chelebadze. The team achieved the same success in 1979 when they beat Dinamo Moscow 5–4 on penalties. They also won the Soviet Top League for a second time in 1978. In 1979, the club played its first match in the UEFA European Cup tournament, defeated Liverpool FC (England) but were eliminated by Hamburger SV (West Germany) in the next round.

The highlight of Dinamo's history was 13 May 1981 when they beat Carl Zeiss (DDR) in the Cup Winners` Cup final game 2:1 in Düsseldorf and brought the precious prize to Tbilisi. It was a celebration not only for the team, but for whole Georgia as well. 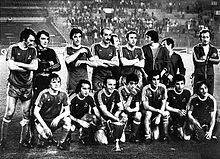 In 1982 Dinamo qualified to semifinal in Cup Winners` Cup tournament. In the 1980s numerous skillful players appeared in the team, but for various reasons they were not able to do their best: Grigol Tsaava, Mikheil Meskhi (junior), Otar Korghalidze, Gia Guruli, Mamuka Pantsulaia, Merab Zhordania, Levan Baratashvili and many other talented players.

From 1983 a crisis began in the history of Dinamo Tbilisi. It was hard for the club to qualify from the first rounds of the Soviet Cup. They also performed poorly in the championship. From 1983 to 1989 the team appeared only once in the UEFA tournaments.

In 1990 the Georgian Football Federation refused to participate in the Soviet Union championship. That meant that no Georgian Football Clubs would appear in Soviet tournaments. From that moment the more recent history of FC Dinamo Tbilisi began. 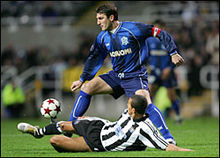 In 1993 Dinamo won a league and cup double. In 1993 Dinamo played its first international official match representing independent Georgia. Dinamo won the home match against Linfield (N.Ireland) 2:1 with goals from Shota Arveladze and Gela Inalishvili. The second leg in Belfast ended 1:1. However it was subsequently alleged that the club had tried to bribe match officials and the club was expelled from the tournament and suspended for two years from UEFA tournaments.

FC Dinamo Tbilisi continued to win Georgian championships and Georgian cup, but had no success in European club tournaments.

In 1996 Dinamo qualified passed 3 rounds in the UEFA Cup. They beat Grevenmacher (Luxemburg) 4:0 – 2:2, Molde (Norway) 2:1 – 0:0 and Torpedo (Russia) 1:0 – 1:1. In the next round the club was unable to overcome Portuguese side Boavista and left the tournament. This was the best result in Dinamo Tbilisi's history. Later, the migration of the key players to Western European clubs caused negative results. It became harder and harder for the club to win the Georgian Championship or Georgian Cup.

The Dinamo stadium was completed in 1976, after 10 years of construction. A large group of architects, under the supervision of famous Georgian specialist Gia Kurdiani, worked on the project. 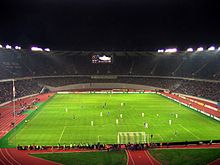 Before that, in place of the new Dinamo stadium, there was a smaller stadium with a maximum capacity of 35 000. The demand for a new and bigger stadium had increased due to the successful performance of Dinamo Tbilisi. This was the Communist time, when every problem had to be solved by the USSR supreme government body. The leader and the first secretary of Georgian Communist Party Eduard Shevardnadze was able to persuade Official Moscow, that Georgia needed bigger and better stadium for home matches. By the time stadium was built, it took the third place with its capacity in Soviet Union. It could fit 78 000 supporters and fulfill every standards and requirements of Soviet Football Federation as well as UEFA.

The first official match played after stadium was built occurred on September 29, 1976. This was UEFA cups 1/32 final match between Dinamo Tbilisi and Cardiff City, Wales. The opening game ended successfully for Dinamo, score 3:0.

Even though stadium's maximum capacity was 78 000, Georgian football fans can remember matches with more accommodation. For instance, in 1979 Dinamo was hosting one of the best British teams – Liverpool. The first round was played in England with the score 2:1 Liverpool won. So the pressure was high on the second game. Stadium was attended by 110 000 people and their support played important role in winning. Dinamo beat Liverpool 3:0 and qualified in 1/8 final. In Soviet Union Dinamo stadium is record keeper of the average attendance of 45 000.

The record attendance was repeated in 1995 for Georgia vs. Germany. The football clubs Spartak Moscow (Russia) and Dinamo Kiev (Ukraine) often played their autumn international matches in the stadium.

Hundreds of Georgian, Russian, European and even South American stars played in Tbilisi Dinamo stadium. In 1985 the stadium hosted the qualifying stage of the Juniors World Cup. Taffarel and Muller played for the Brazilian national team.

In 1995 the stadium was renamed Boris Paichadze National Stadium after a major Georgian international footballer.

The National stadium was the home base of the Georgian National team for several years. Georgians played unforgettable matches against Wales 5:0 and Poland 3:0.

As an architectural building the National Stadium is estimated as one of the best in Georgia. Nearly all of the seats in second circle are covered. In official games under UEFA regulations the stadium can fit only 22 000 supporters on individual seats. Because of that reason Sport organization "Dinamo" is reconstructing "Dinamo" Stadium.

The reconstruction of the Stadium is completed and it fulfills all the standards of UEFA and FIFA, it now can fit 78 000 football fans.

USSR-era players listed have at least one cap for the USSR national football team.