A currency board is a monetary authority which is required to maintain a fixed exchange rate with a foreign currency. This policy objective requires the conventional objectives of a central bank to be subordinated to the exchange rate target.

The main qualities of an orthodox currency board are:

Consequences of adopting a fixed exchange rate as prime target

The currency board in question will no longer issue fiat money but instead will only issue one unit of local currency for each unit (or decided amount) of foreign currency it has in its vault (often a hard currency such as the U.S. dollar or the euro). The surplus on the balance of payments of that country is reflected by higher deposits local banks hold at the central bank as well as (initially) higher deposits of the (net) exporting firms at their local banks. The growth of the domestic money supply can now be coupled to the additional deposits of the banks at the central bank that equals additional hard foreign exchange reserves in the hands of the central bank.

The virtue of this system is that questions of currency stability no longer apply. The drawbacks are that the country no longer has the ability to set monetary policy according to other domestic considerations, and that the fixed exchange rate will, to a large extent, also fix a country's terms of trade, irrespective of economic differences between it and its trading partners. Typically, currency boards have advantages for small, open economies which would find independent monetary policy difficult to sustain. They can also form a credible commitment to low inflation. 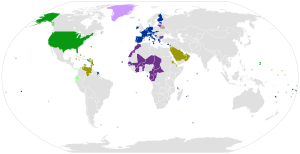 Hong Kong operates a currency board (Hong Kong Monetary Authority), as do Bulgaria and Lithuania. Estonia established a currency board pegged to the Deutsche Mark in 1992 after gaining independence, and this policy is seen as a mainstay of that country's subsequent economic success (see Economy of Estonia for a detailed description of the Estonian currency board). Argentina abandoned its currency board in January 2002 after a severe recession. To some,[who?] this emphasised the fact that currency boards are not irrevocable, and hence may be abandoned in the face of speculation by foreign exchange traders. However, Argentina's system was not an orthodox currency board, as it did not strictly follow currency board rules - a fact which many[who?] see as the true cause of its collapse. Others argue that Argentina's monetary system was an inconsistent mixture of currency board and central banking elements. They think misunderstanding of the workings of the system by economists and policymakers contributed to the Argentine government's decision to devalue the peso in January 2002. The economy fell deeper into depression before a recovery began later in the year.[1] [2]

A gold standard is a special case of a currency board where the value of the national currency is linked to the value of gold instead of a foreign currency.

Examples against the Euro

Examples against the U.S. dollar

Examples against the pound sterling

Examples against other currencies

For a precise definition of what constitutes a currency board, including past examples, see: