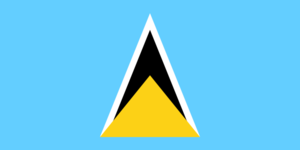 Saint Lucia (pronEng|ˌseɪnt ˈluːʃɪə) is an in the eastern on the boundary with the . Part of the , it is located north of the islands of , northwest of and south of . It is also known as the "Helen of the West Indies" because it switched between British and French control so often it was likened to the mythical Helen of Troy.

Saint Lucia is one of the , named for Saint Lucy of Syracuse. It was first visited by Europeans in about the year 1500 and first colonized successfully by who signed a treaty with the native peoples in 1660. took control of the island from 1663 to 1667 then went to war with France over it fourteen times, and finally took complete control in 1814. Representative government came about in 1924 (with universal adult from 1953) and from 1958 to 1962 the island was a member of the Federation of the West Indies. Finally, on , , Saint Lucia became an independent state of the . The island nation celebrates this every year with a public holiday.

As a , Saint Lucia recognizes Queen Elizabeth II as the of Saint Lucia, represented on the island by a . Executive power, however, is in the hands of the and his cabinet. The prime minister is normally the head of the party winning the elections for the House of Assembly, which has 17 seats. The other chamber of Parliament, the Senate, has 11 appointed members.

Saint Lucia is a full and participating member of the Caribbean Community (CARICOM) and the (OECS).

The volcanic island of Saint Lucia is more mountainous than many other islands, with the highest point being , at convert|950|m|ft|-1 above sea level. Two other mountains, the , form the island's most famous landmark. They are located between Soufrière and Choiseul on the western side of the island. Saint Lucia is also one of the few islands in the world that boasts a drive-in volcano.

The capital city of Saint Lucia is , where about one third of the population lives. Major towns include , and . The local is tropical, moderated by northeast s, with a dry season from January to April and a rainy season from May to December.

The recent change in the import preference regime and the increased competition from n s have made economic diversification increasingly important in Saint Lucia. The island nation has been able to attract foreign business and investment, especially in its offshore banking and industries, which is the island's main source of revenue. The sector is the most diverse in the Eastern Caribbean area, and the government is trying to revitalize the banana industry. Despite negative growth in 2001, economic fundamentals remain solid, and GDP growth should recover in the future.

The population of Saint Lucia is of mostly descent (82.5% of the population). There is a significant Mixed minority representing 11.9%, and with a or East Indian groups at 2.4% and the small European origin minority (descendants of French, British, and Irish colonists). Other or unspecified ethnicity accounts for 3.1%. There are small numbers of Lebanese, ns and Chinese.

The official language is English, but a called Kwéyòl is spoken by 80% of the population and is getting increasing usage and official recognition. [cite web|url=http://stlucia.gov.lc/pr2005/may/kweyolphone_countries_take_stock_of_the_languages_growth.htm |title=Kweyolphone Countries Take Stock of the Language's Growth |publisher=Government of Saint Lucia |accessdate=2008-08-22] It evolved from French, Carib and elements of . Saint Lucia is a member of "La ".

St. Lucia boasts the highest ratio in the world for number of Nobel laureates produced with respect to the total population of the nation. Two winners have come from St. Lucia: Sir Arthur Lewis won the Nobel Prize in Economics in 1979, and received the in 1992. Both were born on January 23rd, but in different years.

Migration from Saint Lucia is primarily to countries, with the (see ) having almost 10,000 Saint Lucian born citizens, and over 30,000 of Saint Lucian heritage. The second most popular destination for Saint Lucian expatriates is the , where combined (foreign and national born Saint Lucians) almost 14,000 reside. is home to a few thousand Saint Lucians, whilst most other countries in the world have less than 50 citizens of Saint Lucian origin (the exceptions being and with 124 and 117 Saint Lucian expats respectively). [http://www.oecd.org/dataoecd/18/23/34792376.xls]

[
http://www.ianandwendy.com/st-lucia here] ] The culture of Saint Lucia has been influenced by African, French and English heritage. One of the secondary languages is Kreole, a form of French .

;FestivalsSaint Lucian cultural festivals include La Rose and La Marguerite, the one representing the order, the other one representing , which can be seen on a mural painted by Dunstan St. Omer, depicting the holy of , and .

Traditionally, in common with other Caribbean countries, Saint Lucia held a before . In 1999, it was moved to mid-July in order to not to coincide with the much larger , so as to attract more overseas visitors.

;Music and danceA popular folk dance is the .

As well as other Caribbean music genres such as soca, , , and , Saint Lucia has a strong indigenous folk music tradition.

Each May since 1992, Saint Lucia has hosted an internationally-renowned Jazz Festival.

Tourism is vital to St. Lucia's economy and the economic importance of such is expected to continue to increase as the market for bananas becomes more competitive. Tourism tends to be more substantial during the dry season (January to April). St Lucia tends to be popular due to its tropical weather and scenery and its large number of beaches and resorts.

Other tourist attractions include the world's only drive-in , (at Soufriere), the Botanical Gardens, the rain forests and Pigeon Island National Park, which is home to Fort Rodney, an old British military base.

The majority of tourists visit St. Lucia as part of a cruise. Most of their time tends to be spent in , although , and are popular locations to visit. Tourists should venture from the beaten path of shops and beaches and explore the beautiful nature of St. Lucia. is where a second home to the boxer George Foreman is situated.