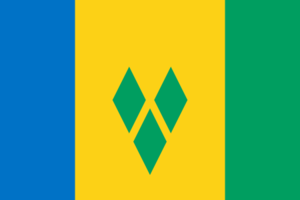 Saint Vincent and the Grenadines is an island nation in the chain of the . Its convert|389|km2|sqmi|0|sing=on territory consists of the main island of Saint Vincent and the northern two-thirds of the . The country has a French and British colonial history and is now part of the and CARICOM.

Indians aggressively prevented an settlement on St. Vincent until the 18th century. Enslaved - whether shipwrecked or escaped from Barbados, St. Lucia and Grenada and seeking refuge in mainland St. Vincent, or Hairouna as it was originally named by the Caribs - intermarried with the Caribs and became known as Garifuna or "Black Caribs". Beginning in 1719, French settlers cultivated coffee, tobacco, indigo, cotton, and sugar on plantations worked by enslaved Africans. In 1763, St. Vincent was ceded to Britain. Restored to French rule in 1779, St. Vincent was regained by the British under the in which Great Britain officially recognized the end of the American Revolution. Ancillary treaties were also signed with France and Spain, known as the Treaties of Versailles of 1783, part of which put St. Vincent back under British control.Conflict between the British and the Black Caribs, led by defiant Paramount Chief , continued until 1796, when General Sir crushed a revolt fomented by the French radical Victor Hugues. More than 5,000 Black Caribs were eventually deported to , an island off the coast of .

Slavery was abolished in 1834. After the apprenticeship period, which ended prematurely in 1838, labour shortages on the plantations resulted in the immigration of indentured servants. The Portuguese came from Madeira starting in the 1840s and shiploads of East Indian labourers arrived between 1861-1880. Conditions remained harsh for both former slaves and [http://www.svgindianheritage.com immigrant agricultural workers] , as depressed world sugar prices kept the economy stagnant until the turn of the century.

From 1763 until independence, St. Vincent passed through various stages of colonial status under the British. A representative assembly was authorized in 1776, Crown Colony government installed in 1877, a legislative council created in 1925, and universal adult suffrage granted in 1951.

During this period, the British made several unsuccessful attempts to affiliate St. Vincent with other Windward Islands in order to govern the region through a unified administration. The colonies themselves, desirous of freedom from British rule, made a notable attempt at unification called , which collapsed in 1962. St. Vincent was granted associate statehood status on October 27th, 1969, giving it complete control over its internal affairs. Following a referendum in 1979, under Milton Cato St. Vincent and the Grenadines became the last of the Windward Islands to gain independence on the 10th anniversary of its associate statehood status, October 27th, 1979.

Natural disasters have featured in the country's history. In 1902, La Soufrière volcano erupted, killing 2,000 people. Much farmland was damaged, and the economy deteriorated. In April 1979, La Soufrière erupted again. Although no one was killed, thousands had to be evacuated, and there was extensive agricultural damage. In 1980 and 1987, hurricanes compromised banana and coconut plantations; 1998 and 1999 also saw very active hurricane seasons, with in 1999 causing extensive damage to the west coast of the island.

. The current Prime Minister of Saint Vincent and the Grenadines is the Honourable Dr. Ralph Gonsalves, affectionately called "Comrade."

The country has no formal armed forces, though includes a Special Service Unit.

Saint Vincent and the Grenadines are a full & participating member of the Caribbean Community (CARICOM) and the (OECS).

, dominated by production, is the most important sector of this lower-middle-income economy. The services sector, based mostly on a growing tourist industry, is also important. The government has been relatively unsuccessful at introducing new industries, and a high of 22% continues. The continuing dependence on a single crop represents the biggest obstacle to the islands' development; tropical storms wiped out substantial portions of crops in both 1994 and 1995. The sector has considerable potential for development over the next decade. The recent filming of the Pirates of the Caribbean movies on the island has also helped to increase tourism and expose the country to the wider world. Recent growth has been stimulated by strong activity in the construction sector and an improvement in tourism. There is a small manufacturing sector and a small offshore financial sector whose particularly restrictive secrecy laws have caused some international concern. In addition, the natives of are permitted to hunt up to four s per year under IWC subsistence quotas.

Population: 118,149 (June 2008 est). Ethnic groups: Black 56%, East Indian 21%, Mixed Race 10%, Carib Amerindian 3%, Other 10%Fact|date=August 2008. Most Vincentians are the descendants of people brought to the island to work on plantations. There are other ethnic groups such as Portuguese, , i and living on the island. There is also a growing Chinese population and a sizable minority of mixed race.

St. Vincent has a high rate of emigration. With extremely high unemployment and under-employment, population growth remains a major problem.

While the official language is English, many of the locals speak a called . [cite web |last=Gordon |first=Raymond G., Jr. (ed.) |year=2005 |title=Ethnologue: Languages of the World, 15th edition |publisher=SIL International |location=Dallas, TX |url=http://www.ethnologue.com/show_country.asp?name=VC ] [cite web |title=St. Vincentians |url=http://www.everyculture.com/wc/Rwanda-to-Syria/St-Vincentians.html |work=everyculture.com] [cite web |title= Country Fact Sheet on Saint Vincent and the Grenadines |url=http://www.irb-cisr.gc.ca/en/research/publications/index_e.htm?docid=306&cid=0&version=printable&disclaimer=show |pubisher=Research Directorate of the Immigration and Refugee Board of Canada ] English is used in education, government, religion, and other formal domains, while Creole (or 'dialect' as it is referred to by locals) is used in informal situations such as in the home and among friends.

The country has only nine FM radio stations, one of which also operates on an AM frequency. It has one television broadcast station and one cable television provider.
* [http://www.nbcsvg.com/ NBC]
* [http://www.star983fm.com/ Star FM]

The country has two ISPs: [ [http://www.candw.vc Cable &amp; Wireless (St. Vincent and the Grenadines) ] at www.candw.vc] and .