The Irish pound (English) or punt Éireannach (Irish) was the of Ireland until 2002. Its code was "IEP", and the usual notation was the prefix "£", or "IR£" where confusion might have arisen with the or other pounds. The Irish pound was superseded by the on , , [ [http://www.irishstatutebook.ie/ZZA38Y1998S6.html Economic and Monetary Union Act, 1998 (Section 6)] ] when the Irish pound legally became a subdivision of the euro; actual euro currency did not begin circulation until the beginning of 2002.

The first Irish coinage was introduced in 997 and was initially equivalent to that of , with the pound divided into 20 "s", each of 12 "pence". After a period of debasement, equivalence to sterling was reestablished in the 1180s. [ [http://www.irishcoinage.com/HAMMERED.HTM Irish Hammered Coinage (~995 to ~1660) ] ] However, from 1460, issues were made with different metal contents to those of England and the values of the two currencies diverged. During the Civil War, 1689-1691, James II issued an emergency, base-metal coinage known as .

In 1701, the relationship between the Irish pound and sterling was fixed at 13 Irish pounds = 12 pounds sterling. This led to a situation where Irish copper coins circulated with British silver coins, since 13 pence Irish = 1 British shilling. The only 19th century exceptions were silver tokens denominated in pence Irish [ [http://www.irishcoinage.com/J00078.HTM Bank of Ireland - Ten Pence Token - 1805 ] ] issued by the between 1804 and 1813. The last Irish copper pennies and halfpennies were minted in 1823. The distinct Irish pound existed until January 1826 when it was replaced by . Irish banks continued to issue paper money denominated in sterling after 1826 but no further distinct coins were issued.

Following the establishment of the , a new currency was introduced in 1928. This new Irish pound was initially known as the "Saorstát pound" ("Free State pound") and was pegged to the pound sterling. As with sterling, the system was used, with the Irish names "punt" (plural forms include "phunt", "puint", "bpuint" or the same), "scilling" (plural: "scillinge") and "pingin" (plural: "pinginí" or "phingine"). The currency became a reality with the introduction of coins and notes. However, the pound sterling continued to be accepted on a one-for-one basis.

From 1938, the currency was referred to as the "Irish pound", after the changed the state's name. The [http://www.irishstatutebook.ie/ZZSI102Y1938.html Currency Act, 1927, Adaptation Order, 1938] was the actual mechanism by which change took place. The value of the pound did not change, and it was still subdivided into 20 shillings or 240 pence.

of the currency was actively discussed in the 1960s. Chief among the 's concerns was the pound sterling. When the British Government decided to decimalise its currency the Irish Government followed suit. The legislative basis for decimalisation in the Republic was the [http://www.irishstatutebook.ie/1969_23.html Decimal Currency Act, 1969] . The number of pence in an Irish pound was redefined from 240 to 100, with the symbol for penny changing from "d" to "p". The pound itself was not revalued by this act and therefore pound banknotes were unaffected, although the 10 shillings/scillinge note was replaced by the 50p coin. New coins were issued of the same dimensions and materials as the corresponding new British coins. The [http://www.irishstatutebook.ie/1970_21.html Decimal Currency Act, 1970] made additional provisions for the changeover not related with the issue of coins.

Decimalisation was overseen by the "Irish Decimal Currency Board" which was created on , . It provided a variety of changeover information including a pamphlet called "Everyone's Guide to Decimal Currency". The changeover occurred on , , .

Right up until complete withdrawal of the Irish pound on , , those UK coins which were the same sizes and compositions as the corresponding Irish coins were accepted virtually everywhere in Ireland.

Breaking the link with sterling

In the 1970s, the was introduced, which the Republic decided to join. The finally broke the one-for-one link that existed between the Irish pound and the pound sterling; by , the link between the two currencies that had existed for over 50 years was broken and an was introduced. By this time, trade with the represented 50% of Irish exports and 47% of imports; the Irish economy had diverged greatly since the introduction of the currency in 1928 and was less dependent on trade with the UK. Until this exchange rate was necessary, UK currency was accepted in the Republic on a one-for-one basis by many institutions.

This period also saw the creation of the at in 1978 so that banknotes and coinage could be manufactured within the state. Prior to this banknotes were printed by specialist commercial printers in , and coins by the . 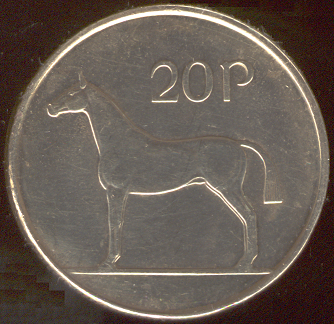 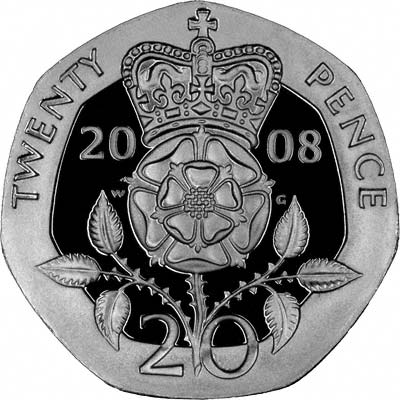 Until 1986, all decimal Irish coins were the same shape and size as their UK counterparts. After this, however, all new denominations or redesigned coins were of different sizes to the UK coinage. The new 20p and £1 coins were completely different in size, shape and composition to the previously introduced UK versions. When the UK 5p and 10p coins were reduced in size, the Irish followed suit but with the new Irish 10p smaller than the new UK version and the new Irish 5p slightly bigger than the UK version. The Irish 50p was never reduced in size as it was in the UK and this was presumably due to forthcoming replacement of the Irish pound by the .

Replacement with the euro

Although the euro became the currency of the countries including the Republic on , it wasn't until the agreed date of that the state began to withdraw Irish pound coins and notes, replacing them with euro . All other Eurozone countries withdrew their currencies in a similar fashion, from the agreed date. Irish pound coins and notes ceased to be legal tender on , [ [http://www.irishstatutebook.ie/ZZSI313Y2001.html Irish Pound Notes and Coins (Cessation of Legal Tender Status) Order, 2001] ] although they will be exchangeable indefinitely for euro at the Central Bank.

On , the total value of Irish banknotes in circulation was €4,343.8 million, and the total value of Irish coins was €387.9 million. The Irish cash changeover was one of the fastest in the , with some shops illegally ceasing to accept pounds after the first week or two. With a conversion factor of 0.787564 Irish pounds to the euro, [Of the 15 national currencies originally tied to the euro (also including the currencies of , and [http://www.vatican.va/news_services/press/documentazione/documents/sp_ss_scv/euro/euro_en.html#VATICAN] ), the Irish pound is the only one whose conversion factor is less than 1, i.e. the unit of the national currency was worth more than one Euro.] fifty-six per cent of the value of Irish banknotes was withdrawn from circulation within two weeks of the introduction of euro banknotes and coins, and 83.4 per cent by the time they ceased to have legal tender status.

Withdrawal of coinage was slower, having a lower priority, with only 45 per cent of coins withdrawn by . This figure is somewhat misleading, as at that point, almost all coinage in circulation had indeed been withdrawn &ndash; the remainder being kept as souvenirs, in hoards, or missing in households.

All Irish coins and banknotes, from the start of the Irish Free State onwards, both decimal and pre-decimal, may be exchanged for euro at the Central Bank in Dublin.

Both decimal day and the euro changeover led many in Irish society to believe that prices had been improperly raised by traders taking advantage of the confusion, [ [http://www.insideireland.com/sample14.htm Inside Ireland, "The Euro by Hugh Oram"] (retrieved 29 October 2006)] exchange rates notwithstanding. In the case of the euro the government took special measures to prevent any unnecessary price changes, which ultimately proved ineffective. The period of changeover also took place during an economic boom in the country, and inflation was high. As the cost of living and prices rose, people were eager to blame it on the merchants taking advantage of changeover confusion.