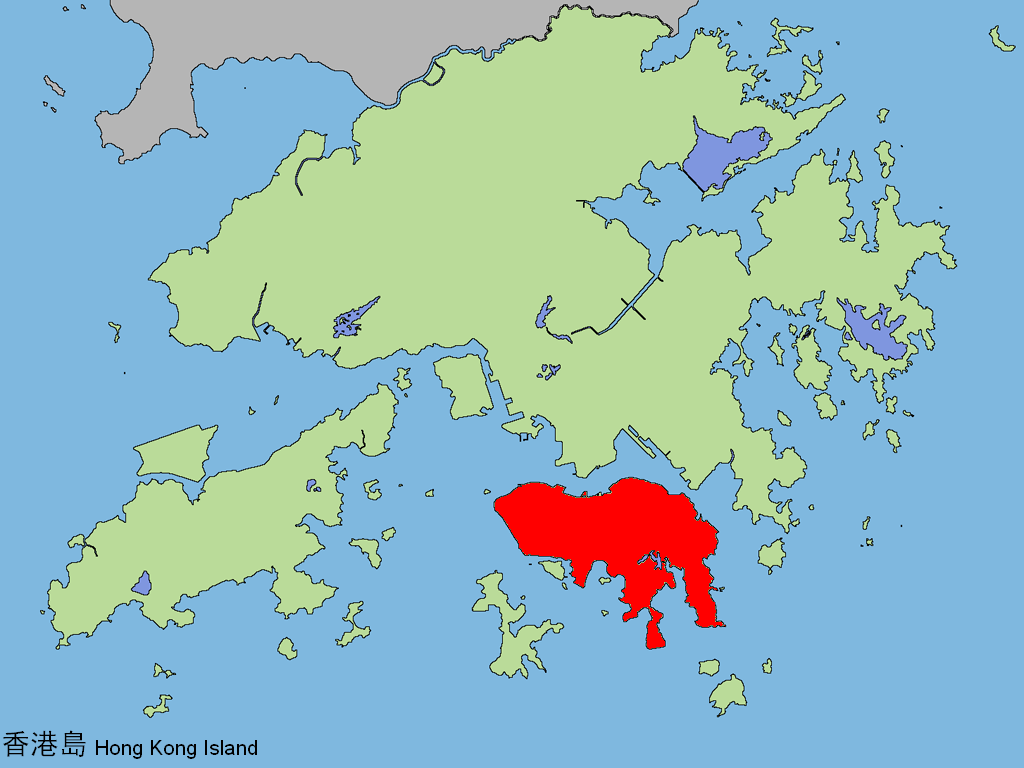 Hong Kong Island (zh-t|t=香港島) is an island in the southern part of , . It has a population of 1,268,112 and its population density is 15,915/km², as of 2006. The island had a population of 3,000 inhabitants scattered in a dozen fishing villages when it was occupied by the in the in 1842, and the City of Victoria was then established on the island by the British Force in honor of . The Central area on the island is the historical, political and economic centre of . The northern coast of the island forms the southern shore of the , which is largely responsible for the development of due to its deep waters favoured by large trade ships.

The island is home to many of the most famous sights in Hong Kong, such as "The Peak", Ocean Park, many historical sites and various large shopping centres. The mountain ranges across the island are also famous for .The northern part of Hong Kong Island together with forms the core urban area of Hong Kong. Their combined area is approximately 88.3 km2 (34.5 sq. mi.) and their combined population (that of the northern part of the island and of Kowloon) is approximately 3,156,500, reflecting a population density of 35,700/km² (91,500/sq. mi.).

The island is also sometimes referred to locally as "Island side". This style was formerly applied to many locations (eg 'China-side' or even 'Kowloon Walled City-side') but is now only heard in this form and 'Kowloon side', suggesting the two sides of the harbour. [Booth, Martin. "Gweilo: A memoir of a Hong Kong childhood", Bantam Books, 2005. ISBN 0553816721, pp108, 173]

"Note:" Hong Kong Island is not part of the Islands District.

Hong Kong Island was first occupied militarily by Captain , British , on . It was known as the "barren rock". The landed at .

The officially ceded the Island "in perpetuity" to Great Britain in 1842. Hong Kong developed into a prosperous, if somewhat sleepy, colonial outpost, and a convenient port from which the British Empire could extract material wealth from the decaying Qing Empire. The territory of Hong Kong was further expanded in 1898 with the acquisition of Kowloon and the New Territories in a 99-year lease. The prosperity of Hong Kong came to a sudden end with the outbreak of the Second World War in 1939, and the subsequent Japanese invasion in 1941.

The was a dark period for Hong Kong. Britons, Canadians, ns and the Hong Kong Volunteer Defence Forces resisted the Japanese invasion commanded by which started on , , eight hours after the attack on . However the Japanese were able to take control of the Hong Kong skies on the first day of attack, outnumbering the defensive forces. The Britons and the Indians retreated from the and consequently from Kowloon under heavy aerial bombardment and artillery barrage. Fierce fighting continued on Hong Kong Island between the Japanese and Canadians, the result of which was the loss of the only reservoir in Hong Kong. The Canadian Winnipeg Grenadiers fought at the crucial point of Wong Nai Chong Gap and successfully secured the passage between Central and the secluded southern parts of the island. However, their victory did not last long.

Hong Kong fell on , , which thereafter was often called "Black Christmas" by locals. The , Mark Young, surrendered in person at the temporary Japanese headquarters, on the third floor of the . became the first Japanese governor of Hong Kong. Hyper-inflation and food rationing followed; and the Japanese declared Hong Kong Dollars illegal. Furthermore, 10,000 women were raped in the first few days after Hong Kong's capture and a large number of suspected dissidents were executed. The Japanese cut rations for civilians to conserve food for soldiers, usually to starvation levels. Many people were forcibly moved to famine- and disease-ridden areas of the mainland. When the Japanese surrendered to the United States on , , the population of Hong Kong had shrunk to 600,000, less than half of the pre-war population of 1.6 million.

Hong Kong Island is the second-largest island of the territory, the largest being . Its area is 80.4 km², including 6.98 km² of land reclaimed since 1887 and some smaller scale ones since 1851. It makes up approximately 7% of the total territory. It is separated from the mainland ( and ) by .

and the run exclusively on Hong Kong Island, which run from to , with a branch links from to Happy Valley and the Central District to respectively.

Hong Kong Island is connected to the on the mainland by two road-only s (the and the ), two MTR railway tunnels (Tsuen Wan Line and Tung Chung Line) and one combined road and MTR rail link tunnel (, containing the Tseung Kwan O Line and road traffic in separate conduits running side by side). A fourth rail link ( from to ) and a fourth harbour-crossing tunnel are being planned in order to solve the congested traffic of the current tunnels in peak hours. There is no bridge between the island and the mainland. A bridge connects and of Aberdeen on Hong Kong Island. It was opened in 1983 with two lanes and was expanded to four in 1994.