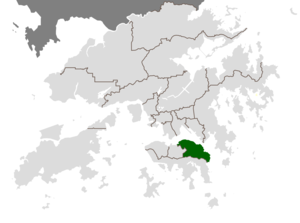 It is located in the north east of and includes the areas of , the eastern portion of , , , , and .

Originally a backwater of fishing villages, quarries and dockyards, the Eastern District is now mostly residential, with some industrial areas and several large s, and is densely populated. A number of large public and private housing estates are located within the district, including , and . A commercial hub has been developed from the former industrial areas in western part of Quarry Bay.

In the past the district was linked by a single King's Road, which was notoriously congested during peak hours, this had largely been solved by the constructions of the , the Island Line within the system in the 1980s and it contains the long-historied tram line that stretches from Shau Kei Wan towards other districts near the sea shore.