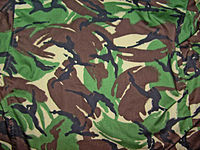 Disruptive Pattern Material (DPM) is the commonly used name of a camouflage pattern used by British forces as well many other armies worldwide, particularly in former British colonies.

The main variants are a four-colour woodland pattern and desert patterns in two, three or four colours. DPM has also been produced in black/white/grey, in various blue tones and even in purples, (the latter for the Swazi Royal Guard.)

The British army had used a form of DPM for the famous Denison smock issued to parachute and commando troops from the early 1940s. The first examples of this design were said to be hand-painted.[citation needed] The Denison smock design went through minor changes, and continued in use with the Royal Marines and the Parachute Regiment (until the mid - late 1970s).

From 1960, the British Army had been issued with the 1960 Pattern field-uniform range to replace the Second World War-era khaki Battledress. This consisted of a Smock, combat; Trousers, combat; a Hood, attached to the Smock by the two epaulette buttons and a third concealed under the collar; and for exceptionally cold conditions, a Parka. These resemble a US Army design, and were made from a tightly woven cotton fabric in plain olive green.

The first, limited, use of DPM

A new British DPM was developed in the early 1960s, using the four basic western European temperate colours of black, dark brown, mid-green and a dark sand to make a very effective camouflage that has survived in its basic design, with no more than slight changes to the colours and pattern, until current times.

This design was probably used first on a very small scale for a hooded Smock, Windproof, 1963 Pattern, issued only to special forces.

In 1966 the Army introduced for the first time, though not universally, a camouflage field uniform. Known informally as the 1966 Pattern, it was in fact identical in design to the 1960 Pattern kit, though of course now made in DPM fabric. It is labelled, like the earlier plain olive green version, Smock, combat, 1960 Pattern and Trousers, combat, 1960 Pattern.

The 1966 DPM range did not completely replace the plain olive green 1960 Pattern Smock and Trousers, which continued to be worn widely until the 1968 DPM kit was issued. Both The Royal Marines and the Parachute Regiment continued to wear the Trousers, combat 1960 Pattern with the Denison smock, and examples of these trousers were made even after 1968. These units eventually stopped issuing the Denison smock (in mid - late 1970s) and adopted smocks in the general-issue DPM while still for a time wearing the plain olive 1960 Pattern Trousers.

The 1968 Pattern range - the first general use of DPM 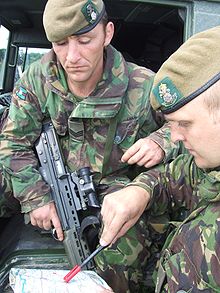 Before the 1966 Pattern equipment had reached all units a slightly revised design of Smock, combat and Trousers, combat were introduced as the 1968 Pattern range. The 1966 Pattern DPM fabric design was changed very little for the 1968 issue, and it seems that the 1968 Pattern garments were made for some time in the two very similar DPM fabrics. A Hood, combat, DPM, made of DPM cotton fabric and with a plain olive green lining, was also included in the range, fastened as required to the back of the Smock with the two epaulette buttons and a third under the collar.

In this the British army was the first to adopt a camouflage uniform universally.

For the Royal Marines, which had a responsibility for NATO's northern flank, a Smock, Windproof, Arctic and Trousers, Windproof, Arctic were introduced c1972. These were made in a lightweight but windproof DPM fabric, and could be worn over quilted jacket and trousers in extreme cold conditions. The design of both smock and trousers differ radically from both the standard and para designs. The smock is long and loose-fitting, and incorporates a voluminous wired-rim hood, while the trousers have zips in the lower leg to allow them to be put on over boots.

In the mid 1970s a new Smock Parachutist DPM (Para smock) was introduced for the Parachute Regiment and other airborne units. Though made in the 1968 Pattern cotton fabric, its design was closer to that of its predecessor, the Denison smock.

At the same time a Smock, Sniper, was introduced, based heavily on the Smock Parachutist DPM and sharing many of its details. It was distinguished by its padded elbows and shoulders, relocated lower pockets, multiple loops for securing natural camouflage material and hooks for the rifle sling.

During the late 1970s, batches of the 68 pattern camouflage were used by the USAF Police Tactical Neutralisation Teams at RAF Upper Heyford as a temporary stand-in for the ERDL/M81 Woodland fatigues.

The pattern was changed slightly with subsequent issues. The 1984 Pattern has fewer dots and the brown is much darker; 1990 and later has a band of new shapes and is smaller; 1994 has an orangey colour instead of a tan.

DPM items in the Combat Soldier 95[1] (CS95) clothing system have similar colours to the 1966 uniform.

Although slight changes have been made to DPM and the colours, the pattern is easy to recognise. There are also jungle versions of DPM where the colours are brighter, and on one variation the tan is darker than the green. A desert variant was first issued on a limited basis in the late 1980s. This appeared very similar but consisted of subdued sand and khaki hues. This was replaced by a two-colour version by 1990 because four-colour versions had been adopted by some Middle Eastern countries, notably Iraq.

From 1990 a system of Personal Load Carrying Equipment (PLCE) has been used, initially produced in olive green. The olive type was quickly replaced in production by a DPM version, and now almost all British issue webbing and rucksacks are DPM.

Current issued DPM equipment is IRR (Infra-red Reflective) coated. This coating has a specific reflective wavelength in order to blend in with natural colours in the infra-red light spectrum. This reduces the visibility of soldiers to night vision devices, which detect infra-red light, as trees and other green plants reflect deep red and infra-red light (the Wood Effect).

As part of the British Government's Personal Equipment and Common Operational Clothing (PECOC) programme, three new DPM versions were trialled. A modified temperate camouflage using slightly lighter tones to increase versatility, a three-tone desert camouflage with a new darker colour making it more effective against night-vision devices, and an all-new "hybrid" DPM using two colours from each of the former. The hybrid pattern was intended for use on webbing in both temperate and desert environments. Following the issue of an Urgent Operational Requirement for a more effective camouflage for Afghanistan, the hybrid pattern lost out to the Multi-Terrain Pattern which was adopted.

Multi-Terrain Pattern is a camouflage pattern which will replace the four colour woodland uniform known as DPM and the desert pattern uniform used by the British Armed forces. This was procured and announced in late 2009, predicated around use in the Afghanistan theatre of operations but applicable to other theatres.

The current outfit of combat clothing in use has now been produced in MTP and this has been issued to forces deploying to Afghanistan from mid 2010.

A range of patterns were trialled and evaluated in Britain, Cyprus, Kenya and Afghanistan with baseline comparison against existing DPM and desert patterns and existing commercially available patterns.

MTP is a six colour pattern with a similar organic style to the existing DPM.