Gossip Girl (novel series)
This article is about the novel series by Cecily von Ziegesar. For the television adaptation based on the novels, see Gossip Girl. 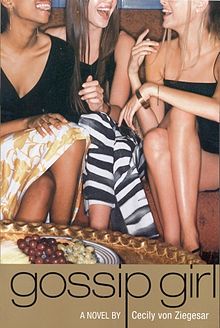 Cover of Gossip Girl, the first novel in the series, released in April 2002

Gossip Girl is an American young adult novel series written by Cecily von Ziegesar and published by Little, Brown and Company, a subsidiary of the Hachette Group. The series revolves around the lives and romances of the privileged teenagers at the Constance Billard School for Girls, an elite private school in New York City's Upper East Side. The books primarily focus on best friends Blair Waldorf and Serena van der Woodsen, whose experiences are among those chronicled by the eponymous gossip blogger.

The first novel, Gossip Girl, was released in April 2002; the eleventh novel of the series was released in May 2007, with a prequel novel following in October 2007. Another follow-up novel, in which the characters return home from college for the holidays, was released in hardback format in November 2009. The original novel became the inspiration for the Gossip Girl teen drama television series, created by Josh Schwartz and Stephanie Savage, which premiered on The CW Television Network on September 19, 2007.

In May 2008, a follow up series, Gossip Girl: The Carlyles, began publication, following the Carlyles triplets as they begin moving to the Upper East Side. As of May 2009, three novels have been released in this series. Ziegesar created a spin-off series, The It Girl, which began publication in 2005, and Yen Press has adapted the series into a manga series titled Gossip Girl: For Your Eyes Only.

The novel that started the series, Gossip Girl, was published in paperback format in April 2002.[1] Two new novels were released annually until the final novel, Don't You Forget About Me, was released in May 2007, showing the main characters graduating from high school and moving on to college and other pursuits.[2] A prequel novel, It Had To Be You, was released in October 2007 in hardcover and electronic book format. It detailed the events that occurred a year before the first novel.[3] A box set containing the eleven novels of the series and the prequel novel, in paperback format, was released November 1, 2009.[4] In the same month, a sequel novel, I Will Always Love You is also scheduled to be released. The hardcover book tells the story of the main characters returning home from college for the holidays.[5] Hachette Group re-released all of the original novels in electronic book format between 2008 and 2009.[6]

Books nine, ten and eleven of the main series were ghostwritten.[7][8]

In December 2009, Yen Press announced that it was working with Korean artist Baek Hye-Kyung to create a manga adaptation of the series titled Gossip Girl: For Your Eyes Only. Rather than adapting the original novels, however, the graphic novels will feature original stories with the same characters. It will be serialized in the company's anthology magazine Yen Plus, with the first chapter appearing in the January 2010 issue.[9]

In 2011, the parody novel Gossip Girl: Psycho Killer was scheduled for release in October.

The criticism of this series primarily revolves around whether the events depicted in the story are appropriate for the teenage audience the books attract.[26][27] American author and feminist Naomi Wolf calls the books "corruption with a cute overlay," and she claims that "sex saturates the Gossip Girl books.... This is not the frank sexual exploration found in a Judy Blume novel, but teenage sexuality via Juicy Couture, blasé and entirely commodified."[28]

Pam Spencer Holley, former YALSA President with the American Library Association (ALA), presents a different point of view, claiming simply to be "happy to see teen girls reading."[29] Confident that young girls will move onto more respected literature, she points out, "Unless you read stuff that's perhaps not the most literary, you'll never understand what good works are." She went on to say, "Nobody complains about the adult women who read Harlequin romances."[29] Holley created a new ALA book list to encourage teens to consult a list of recommendations for "both avid and reluctant readers, who are looking for books like Cecily von Ziegesar's Gossip Girl series. 'The books on this list are perfect for when your readers have finished with every Gossip Girl title in your library and are clamoring for another book like the Gossip Girl....'"[30]

The television adaptation, also titled Gossip Girl, was picked up by The CW.[31] Josh Schwartz, the creator of The O.C., is executive producer for the project.[32] In the show, Blake Lively plays Serena, Leighton Meester plays Blair, Chace Crawford plays Nate, Penn Badgley plays Dan, Ed Westwick plays Chuck, Taylor Momsen plays Jenny and Jessica Szohr plays Vanessa. The show is based on the books but does not follow the same story line.[33] Some key characters from the books, such as Aaron Rose or the Lord, are introduced into the show with different storylines, and some characters undergo changes to their personality and characteristics. For example, Serena's older brother in the books, Erik van der Woodsen is two years younger than her instead of older, and the characters of Serena, Blair, Chuck and Nate have been best friends since childhood.