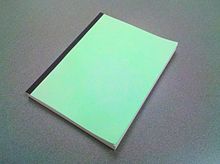 Paperback book with a green cover

Paperback, softback or softcover describe and refer to a book by the nature of its binding. The covers of such books are usually made of paper or paperboard, and are usually held together with glue rather than stitches or staples. Inexpensive books bound in paper have existed since at least the 19th century and exist in a number of formats that have specific names, such as pamphlets, yellowbacks, dime novels and airport novels.[1] Most paperbacks are either "mass-market paperbacks" or "trade paperbacks". In contrast, books with hardcover or hardback are bound with cardboard covered with cloth; although more expensive, hardbacks are more durable.

Paperback editions of books are issued when a company decides to release a book in a low-cost format. Cheap paper, glued bindings and the lack of a hard cover contribute to the inherent low cost of paperbacks, especially when compared to the average cost of hardcovers. Paperbacks can be the preferred medium when a book is not expected to be a major seller, or in other situations where the publisher wishes to release a book without putting forth a large investment. Examples include many novels and new editions or reprintings of older books.

Publishers must balance the larger profit to be made by selling few hardcovers with a great profit per unit, against the potentially greater profit to be made by selling many paperbacks with a small profit per unit. Many modern books, especially genre fiction, are first editions in paperback. Best-selling books may maintain sales in hardcover sufficiently to delay a paperback edition for longer than a year.

The 20th-century mass-market paperback format was pioneered by German publisher Albatross Books in 1931, but the experiment was cut short. It was an immediate financial success in the UK in 1935, when Penguin Books adopted many of Albatross' innovations, including a conspicuous logo and color-coded covers for different genres. British publisher Allen Lane launched the Penguin Books imprint in 1935 with ten reprint titles, launching the paperback revolution in the English-language book market. Number one on Penguin's 1935 list was André Maurois' Ariel.

Lane intended to produce cheap books. He bought paperback rights from publishers, ordered then-huge print runs (e.g., 20,000 copies) to keep unit prices low and looked to non-traditional book-selling retail locations. Booksellers were initially reluctant to buy his books, but when Woolworths placed a large order, the books sold extremely well. After that initial success, booksellers were no longer reluctant to stock paperbacks and the word "Penguin" became closely associated with the word "paperback".

Robert de Graaf, in 1939, issued a similar line in the USA, partnering with Simon & Schuster to create the Pocket Books imprint. The term "pocket book" became synonymous with paperback in English-speaking North America. In Québec, the term "livre de poche" was used and is still in use today. De Graaf, like Lane, negotiated paperback rights from other publishers, and produced many runs. His practices contrasted with those of Lane in his adoption of illustrated covers, aimed at the North American market. In order to reach an even broader market than Lane, he went the mass-market route through distribution networks of newspapers and magazines, which had a lengthy history of being aimed (in format and distribution) at mass audiences. This was the beginning of mass-market paperbacks.

Because of its number-one position in what became a very long list of pocket editions, James Hilton's Lost Horizon is often cited as the first American paperback book, which is not correct. The first mass-market, pocket-sized, paperback book printed in America was an edition of Pearl Buck's The Good Earth, produced by Pocket Books as a proof-of-concept in late 1938, sold in New York City and now very collectible.

A number of companies entered the paperback publishing field in the United States in the years after Pocket Books' inception, including Ace, Dell, Bantam, Avon and dozens of other smaller publishers. At first, paperbacks consisted entirely of reprints, but Doubleday and other hardcover publishers reacted when in 1950 Gold Medal Books started publishing original works in paperback.

Roscoe Kent Fawcett wanted to establish a line of Fawcett paperbacks, and he felt original paperbacks would not be a violation of the contract. In order to test a loophole in the contract, Fawcett published two anthologies—The Best of True Magazine and What Today's Woman Should Know About Marriage and Sex—reprinting material from zoo magazines not previously published in books. When these books successfully sailed through the contract loophole, Fawcett announced Gold Medal Books, their line of paperback originals. Sales soared, prompting Gold Medal editorial director Ralph Daigh to comment, "In the past six months we have produced 9,020,645 books, and people seem to like them very well." However, hardcover publishers resented Roscoe Fawcett's innovation, as evidenced by Doubleday's LeBaron R. Barker, who claimed that paperback originals could "undermine the whole structure of publishing."[2]

Genre categories began to emerge, and mass-market book covers reflected those categories. Mass-market paperbacks had an impact on slick and pulp magazines. The market for cheap magazines diminished when buyers went to cheap books instead. One factor in this was that the content included in both formats crossed over—authors also found themselves abandoning magazines and writing for the paperback market. The leading paperback publishers often hired experienced pulp magazine cover artists, including Rudolph Belarski and Earle K. Bergey, who helped create the look and feel of paperbacks and set an appealing visual standard that continues to this day. Scores of well-known authors were published in paperback, including Arthur Miller and John Steinbeck.

World War II brought both new technology and a wide readership of men and women now in the military or employed as shift workers; paperbacks were cheap, readily available, and easily carried. Furthermore, people found that restrictions on travel brought them more time to read more paperbacks. Four-color printing and lamination developed for military maps made the paperback cover eye catching and kept ink from running as people would examine the cover of the book. A revolving metal rack was designed to display a wide variety of paperbacks in a small space that found its way into drugstores, dimestores, and markets.

US paperbacks quickly entered the Canadian market, because the newspaper and magazine distribution network was controlled by US companies. Canadian mass-market paperback initiatives in the 1940s included White Circle Books, a subsidiary of Collins (UK); it was fairly successful but was soon outstripped by the success of Harlequin which began in 1949 and, after a few years of publishing fragile editions of undistinguished novels, focused on the romance genre and became one of the world's largest publishers.

Paperbacks include inexpensive "mass-market paperbacks", in the standard "pocketbook" format generally printed on inexpensive paper, which will discolor and disintegrate over a period of decades, and more expensive "trade paperbacks" in larger formats printed on quality paper, sometimes acid-free paper.

A mass-market paperback (MMP or MMPB) is a small, usually non-illustrated, and inexpensive bookbinding format. They are commonly released after the hardback edition, and often sold in non-traditional bookselling locations such as airports, drug stores, and supermarkets, as well as in traditional bookstores. Many titles, especially in the area of genre fiction, are first editions in paperback and never receive a hardcover printing. This is particularly true of first novels by new authors.[4]

Business practices by publishers and booksellers also differentiate mass-market paperbacks from hardbacks. When booksellers note that books have been in stock a while and have not sold, they may return them to the publisher for a refund or credit on future orders. However, in the case of mass-market paperbacks, this "return" usually means stripping the front cover, returning that for credit, and pulping the book itself. The copyright page often carries a warning that anyone who buys a book missing its front cover should assume that the publisher has received no payment and the author has received no royalties for that copy. The mass-market paperbacks sold in airport newsstands have given rise to the vaguely defined literary genre of the "airport novel", bought by travellers to while away the hours of sitting and waiting.

Trade paperbacks are typically priced less than hardcover books and higher than mass-market paperbacks. Virtually all advance copies sent for promotional and review purposes are issued in trade paperback format.

In the medium of comic books, trade paperbacks are used to reprint several issues of a comic series in one volume, usually an important storyline or the entire series itself, and the name "trade paperback" has become synonymous with a collection of reprinted material. Graphic novels are also sometimes found in trade paperback form. Publishers sometimes release popular collections first in a hardback form, followed by a trade paperback months later. Books that have done this include Marvel Comics' Secret War and DC Comics' Watchmen amongst many others.