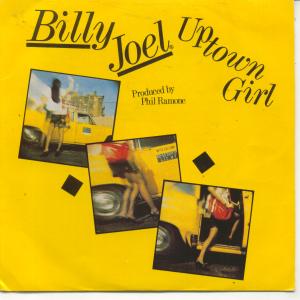 "Uptown Girl" is a performed by musician , whose lyrics deal with a working-class "downtown man" attempting to woo a wealthy "uptown girl". The song was first released in 1983 on his album "". It peaked at #3 on the Billboard charts in the US,

Covers of this song have been performed by Alvin and the Chipmunks, , , and most notably in by Irish boy band , again reaching #1 in the UK, albeit only for a single week.

The song was written about his relationship with his then wife, .Joel makes reference to in the song.

The title character in the was played by model . The two married in 1985. They divorced in 1994 and subsequently the song was missing from the setlist during Joel's 1994 "River of Dreams" tour.

Different versions of the music video opening were produced, in which an is watching the end of Joel's previous hit "" on a small TV. Then, depending on the version, the next image on the TV is either a blank screen or the of the network or TV show the video was on. The only logos known to be used are and . 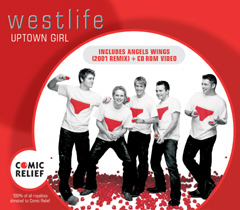 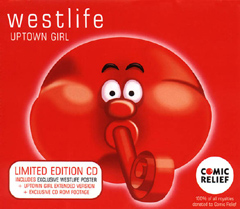 "Uptown Girl" was covered and then released as a single by Irish boyband from second album "Coast to Coast". The single was then also released as a special Comic Relief charity single.

The song is the #14th best selling single of the 21st century in the UK.

The video for this song was shot in a Cafe setting with as the title character while , , , and were featured as high class customers.

Note:The song also reached #1 in several radio charts in Asia like the .