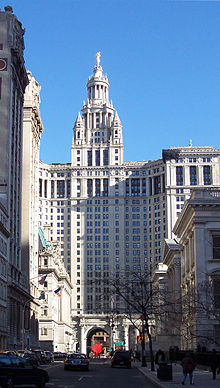 Chambers Street is a bi-directional (two-way) street in the New York City borough of Manhattan. It runs from River Terrace, Battery Park City, in the west, past PS 234 (the Independence School) and Stuyvesant High School to 1 Centre Street, the Manhattan Municipal Building‎, to the east. In the early 20th century the street continued through that building's archway. Between Broadway and Centre Street, Chambers Street forms the northern boundary of the grounds surrounding New York City Hall and the Tweed Courthouse. Opposite the Tweed Courthouse sits the New York Surrogate's Court for Manhattan. 280 Broadway the Marble Palace, lies west of there, on the north side of Chambers.

The New York City Subway has stations at three places on Chambers:

Chambers Street is named for John Chambers, an important parishioner at Trinity Church in Manhattan.[1]