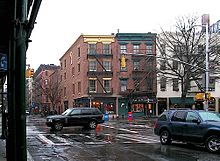 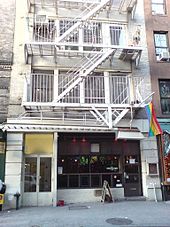 Christopher Street is a street in the West Village neighborhood of the New York City borough of Manhattan. It is the continuation of 9th St. to the west of its intersection with 6th Ave. The Stonewall Inn is located on Christopher Street, and, therefore, the street was at the center of New York's gay rights movement in the late 1970s. To this day the street serves as a symbol of gay pride.

Christopher Street is the oldest street in the West Village, as it ran along the south boundary of Admiral Sir Peter Warren's estate, which abutted the old Greenwich Road (now Greenwich Avenue) to the east and extended north to the next landing on the North River, at present-day Gansevoort Street. The street was briefly called Skinner Road after Colonel William Skinner, Sir Peter's son-in-law. The street received its current name in 1799, when the Warren land was acquired by Warren's eventual heir, Charles Christopher Amos. Charles Street remains, but Amos Street is now 10th Street.[1]

The road ran past the churchyard wall of the Church of St. Luke in the Fields (built 1820-22; rebuilt after a fire, 1981–85) still standing on its left, down to the ferry landing, commemorated in the block-long Weehawken Street[2] (laid out in 1829), the shortest street in the West Village. At the Hudson River, with its foundation in the river and extending north to 10th Street, Newgate Prison, the first New York State Prison, occupied the site from 1796 to 1829, when the institution was removed to Sing Sing and the City plotted and sold the land.[3] 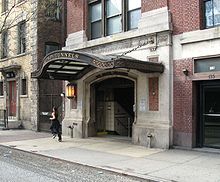 West Street is on more recently filled land, but the procession of boats that had made the inaugural pass through the Erie Canal stopped at the ferry dock at the foot of Christopher Street, 4 November 1825, where it was met by a delegation from the city; together they proceeded to the Lower Bay, where the cask of water brought from the Great Lakes was ceremoniously emptied into the salt water.[4]

In 1961 Jane Jacobs, resident in the area and author of The Death and Life of Great American Cities published that same year, headed a group that successfully stopped Mayor Robert Wagner's plan to demolish twelve blocks along West Street north of Christopher Street, including the north side of Christopher Street to Hudson Street, and an additional two blocks south of it, slated for "urban renewal".[5]

Christopher Street is the first stop in Manhattan on the 33rd Street Line of the Port Authority Trans-Hudson rapid transit railroad. The PATH identifies Christopher Street station with a large single capital 'C'. The street also has a station on the IRT Broadway – Seventh Avenue Line at Christopher Street – Sheridan Square (1 2 trains). 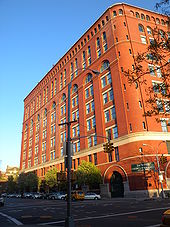 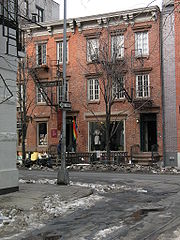 The former Oscar Wilde Bookshop, in an 1830s house at Christopher and Gay Streets

In the 1970s, Christopher Street became the "Main Street" of gay New York. Large numbers of gay men would promenade its length at seemingly all hours. Gay bars and stores selling leather fetish clothing and artistic decorative items flourished at that time. This changed dramatically with the loss of many gay men during the AIDS epidemic in the 1980s. The apparent center of gay life subsequently shifted north of 14th Street to Chelsea. This new area, however, was never as vibrant as the old West Village. While some gay bars remain on Christopher Street, it has largely lost its gay character and is not unlike other quiet thoroughfares in the Village.

Christopher Street is the site of the Stonewall Inn, the bar whose patrons started the 1969 Stonewall riots that are widely seen as the birth of the gay liberation movement. The Christopher Street Liberation Day Committee formed to commemorate the first anniversary of that event, the beginning of the international tradition of a late-June event to celebrate gay pride.[8] The annual gay pride festivals in Berlin, Cologne, and other German cities are known as Christopher Street Day or "CSD". Christopher Street magazine, which began publication in July 1976 was, for many years, one of the most respected gay magazines in the U.S., until it folded in December 1995.

Since 1992, Christopher Park (at the intersection of Christopher, Grove, and W 4 Sreets) has been decorated with the sculpture Gay Liberation by George Segal[9] to commemorate the gay rights traditions of the place.

"Christopher Street" is both a song and the main location of the musical Wonderful Town.

The Oscar Wilde Bookshop located on the corner of Christopher and Gay, was the oldest LGBT bookshop in the world until its closure in 2009.[10]

Christopher Street is home to McNulty's Tea and Coffee Company, a purveyor dating back to 1895.[12][13]