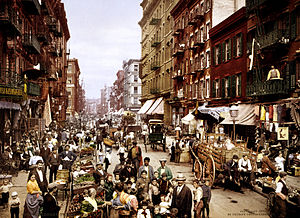 Mulberry Street is a principal thoroughfare in Manhattan, New York. The street was listed on maps of the area since at least 1755. The "Bend" in Mulberry in which the street changes direction from southwest to northeast to a northerly direction was to avoid the wetlands surrounding the Collect Pond. Mulberry street, during the period of the American Revolution, was usually referred to as "Slaughter-house street named for the slaughterhouse of Nicholas Bayard on what is now the southwest corner of Mulberry and Bayard Streets until the summer of 1784, when it was ordered to be removed to Corlaer's Hook,[1]

Mulberry is between Baxter and Mott Streets. It runs north to south through the old center of Little Italy. At the southern end of Mulberry, the street merges into New York's Chinatown, here the street is lined with Chinese green grocers, butcher stores and fish mongers.[2]

The street was named after the mulberry trees that once lined Mulberry Bend,[4] the slight bend in Mulberry Street. "Mulberry Bend is a narrow bend in Mulberry Street, a tortuous ravine of tall tenement-houses... so full of people that the throngs going and coming spread off the sidewalk nearly to the middle of the street... The crowds are in the street because much of the sidewalk and all of the gutter is taken up with vendors' stands."[5] For the urban reformer Jacob Riis, Mulberry Bend epitomized the worst of the city's slums: "A Mulberry Bend Alley" contrasted with "Mulberry Bend becomes a park" were two of the photographs illustrating Jacob Riis's call for renewal, The Battle with the Slum (1902).[6]

During the Italian American festival of the Feast of San Gennaro each September, the entire street is blocked off to vehicular traffic to make way for the street fair.

The Puck Building stands near the north end of the street on the southwest corner of Houston Street. Further south is Saint Patrick's Old Cathedral, standing in its churchyard. Below Prince Street (no, 247) is the former Ravenite Social Club, where wire taps acquired evidence that sent John Gotti to prison.

Mulberry Street has been the subject of books, films and music. Billy Joel's song "Big Man on Mulberry Street" is a jazz influenced song from his 1986 album The Bridge (1986).[7] In 2006 a horror film took the name Mulberry Street.

The street is also quoted in the song Io tengo n'appartamento by the Italian singer Renato Carosone: an old story of a rich singer in Little Italy missing his hometown Napoli.