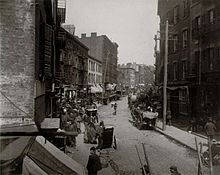 Mulberry Bend was an area in the notorious Five Points neighborhood in Lower Manhattan. It was bound by Bayard Street in the north, Cross Street (changed to Park in 1854) in the south, Orange (changed to Baxter in 1854) Street on the west and Mulberry Street on the east. The "Bend" in the street layout was due to the original topography of the area. Orange and Mulberry Streets headed from southeast to northwest then turned north at the "Bend" to avoid the Collect Pond and surrounding low-lying wetland.

Mulberry Bend was one of the worst parts in the Five Points with multiple back alleyways such as Bandit's Roost, Bottle Alley and Ragpickers Row. In 1897 thanks in part to the efforts of Danish photojournalist Jacob Riis Mulberry Bend was demolished and turned into Mulberry Bend Park. The urban green space was designed by Calvert Vaux. In 1911 it was renamed Columbus Park.[1]

A few tenement buildings on the east side of Mulberry Street dating from the era before the park was built are still there including 48-50 Mulberry Street mentioned in Riis' book How the Other Half Lives.

Cross Street was renamed "Mosco Street" in 1982 after Lower East Side community activist Frank Mosco. The section of Cross Street between Mulberry and Baxter Streets was demapped and added to Columbus Park along with the triangular plaza between Cross and Worth Streets. Worth Street, which was originally laid out in 1859, has since become the southern boundary of Columbus Park.

Locations in the Bend