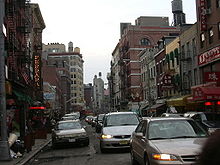 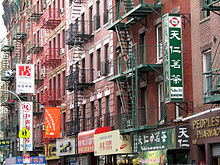 Mott Street is a narrow but busy thoroughfare that runs in a north-south direction in the borough of Manhattan in New York City in the United States. It is best known as Chinatown's unofficial "Main Street". Mott Street runs from Chatham Square in the south to Bleecker Street in the north. It is a one-way street, southbound.

Mott Street existed in its current configuration by the mid-18th century. At that time, Mott Street passed just to the east of the Collect Pond. Like many streets that predated Manhattan's grid, Mott Street meandered around natural features of the landscape rather than running through or over them. It was the need to avoid the now long since paved over Collect Pond that gave Mott Street its characteristic "bend" to the northeast at Pell Street.

Having been previously known as Old Street, as well as Winne Street (also spelled Wynne) for the section between Pell and Bleecker, Mott Street was renamed in the late 18th century to honor the prominent local family of the same name, likely in particular businessman Joseph Mott, a butcher and tavern owner who provided support to the rebel forces in the American Revolution.[1]

During the 19th century the lower portion of Mott Street south of Canal Street was part of the Five Points, a notorious slum neighborhood in New York City. In 1872 Wo Kee, a Chinese merchant opened a general store on Mott Street near Pell Street. In the years to follow, Chinese immigrants would eke out an enclave around the intersection of Mott, Doyer and Pell Streets. At the time, it was the Cantonese immigrants migrating and it first began as a very small Bachelor's Society since it was mostly Chinese males migrating over at the time. It was mostly Cantonese immigrants coming from Taishan, China so as a result it was first a Taishanese community.[2][3] That all changed during the 1960s when an influx of other Cantonese immigrants from Hong Kong began to arrive over with some Taiwanese immigrants as well. As a result, Chinatown began expanding quickly and Standard Cantonese, which is spoken in Guangzhou, China and in Hong Kong became the dominant language of the Chinatown neighborhood. At the time, Chinatown was emerging and growing as a[4] Little Hong Kong, but the growth slowed down later on.[5][6][7][8] Manhattan's Chinatown has grown into the largest Chinatown in the United States, engulfing a large swath of the Lower East Side. But the historic heart of Chinatown, as well as the primary destination for tourists is still Mott Street between Canal Street and Chatham Square. This is center of what is known as the Old Chinatown of Manhattan.[9][10]

Cantonese Gangs In The Past

For more than twenty years Cantonese gangs based on Mott street terrorized Chinatown. The Ghost Shadows made this street their territory once the On Leong Tong Gang gave their approval that had dominance on this street. The approval was not very easy since it involved a bloody battle over the territory. Nicky Louie, who immigrated from Hong Kong in the late 60s to Manhattan's Chinatown ran the Ghost Shadows gang with 50 or more members also originating from Hong Kong. With the Ghost Shadows controlling Mott Street during the 70s, they affiliated with the On Leong Tong Gang. The On Leong Tong were the wealthiest and most influential gang organization in Chinatown. Working with the On Leong benefited the Ghost Shadows a portion of money earned by the Tong's activities. The gangs were the guards of the gambling houses in the On Leong territory that operated in the poor conditions of lofts and basements along Mott Street. The gangs also ran a protection racket whereby shopkeepers paid the gangs a negotiated cash fee for protection during the period of the 80s and 90s, which often involved tea during the negotiation and it was often very peaceful.

The gangs also acted as runners in the Chinatown Connection heroin trade between the Canadian border and spreading it throughout New York. On Leong Gang was like most Chinatown gangs in the past running a legitimate enterprise, serving as a business collective, a crutch for immigrants, even a loan company. The Ghost Shadows were very seriously territorial of Mott Street and one example was a situation where The Ghost Shadows had spotted a White Eagle member walking alone and then kidnapped him into a car and threw him in the East River attempting to drown him. In the 70s, the street was the most violent gang-related period in Chinatown. Gunshots often happened and sometimes tourists would be unintentionally injured. Other gangs that existed were Chung Yee, Liang Shan, the Flying Dragons, the White Eagles and the Black Eagles[11][12][13]

Today this stretch of Mott Street is lined with souvenir shops, tea houses and restaurants, including Wo Hop restaurant at 17 Mott Street and 15 Mott Street, all catering largely to tourists. In 2003, the 32 Mott Street General Store closed due to the effects of the September 11, 2001 attacks on the Chinatown economy. The proximity of the attack along with street closures in lower Manhattan (especially the ongoing closure of Park Row under One Police Plaza) had cut off much business to Chinatown. 32 Mott had been the longest continuously operating store in Chinatown, established in 1891.

Mott Street north of Canal Street was historically part of Little Italy. Today it is predominantly Chinese. This section of Mott Street between roughly Canal and Broome Streets has a number of Chinese-owned fish and vegetable markets. The commercial establishments here cater more to the day to day needs of Chinatown residents than tourists. There are also shops that sell baby jackets, bamboo hats, and miniature buddhas.

The New York Chinese School is at 64 Mott Street. It is the largest Chinese school in North America and was established in 1909 during the Ching Dynasty of China as an overseas Chinese school. It is Chinatown's center of academic learning on Chinese culture, and history. Cantonese and Mandarin classes are also offered at this school, however the Mandarin programs have challenged the long time traditional dominance of Cantonese programs within the school.[19][20]

Though the boundary is fuzzy, the character of Mott Street changes significantly north of about Broome Street. Crossing Broome you leave Chinatown behind and enter "NoLIta" or "North of Little Italy". Fashionable boutiques and restaurants and cafes cater mostly to high income young people. There are still a few remnants of the old Italian neighborhood, most notably Lombardi's Pizzeria, purportedly the first pizzeria established in the United States.

Also in this area is Old St. Patrick's Cathedral, the first Catholic cathedral built in New York (consecrated 1815). The high walls surrounding the church along Mott Street attest to the tension between Protestants and Catholics in New York during the 19th century. The Church of the Transfiguration was also built here, making it the oldest Roman Catholic church in Manhattan.