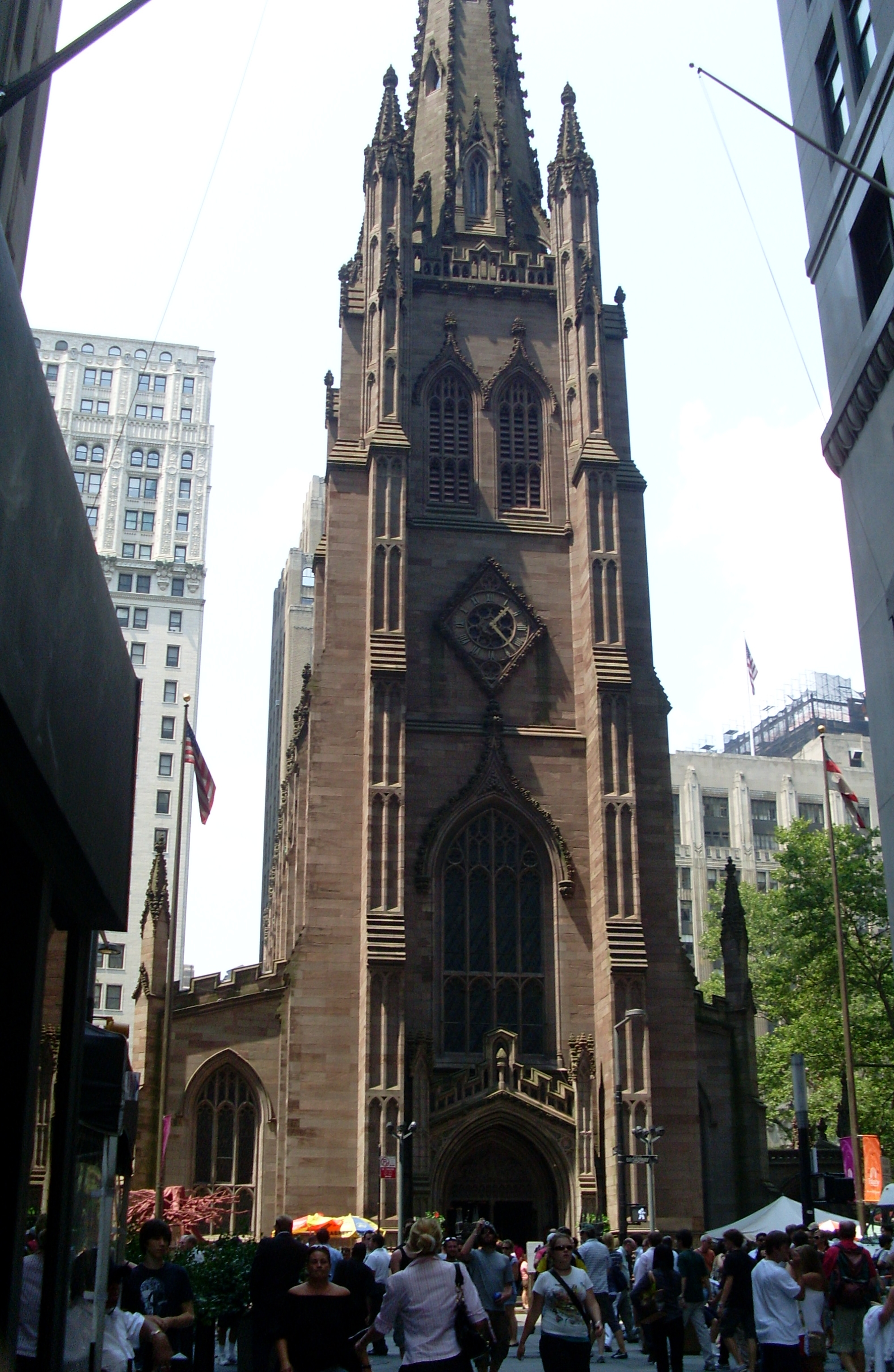 Trinity Church, at 79 Broadway in New York City, is a historic full service church in the . Trinity Church is located at the intersection of Broadway and in downtown Manhattan.

In 1696, Governor Benjamin Fletcher approved the purchase of land in Lower Manhattan by the community for construction of a new church. The parish received its charter from King William III of England on May 6, 1697. Its land grant specified an annual rent of one peppercorn due to the English crown.

The present day Trinity Church, designed by architect , is considered a classic example of architecture and was designated a in 1976 for its architectural significance and place within the history of New York City.,

When the church was consecrated on May 1, 1846, its soaring Neo-Gothic spire, surmounted by a gilded cross, dominated the skyline of lower Manhattan. Trinity was a welcoming beacon for ships sailing into .

On July 9, 1976, the church was visited by , where she was presented with a symbolic "back rent" of 279 . Since 1993, Trinity church has been the location at which the holds its senior graduation ceremonies. The school is located on Trinity Place, a few blocks away from the church.

On September 11th, 2001, debris from collapsing World Trade Center knocked over a giant tree that had stood for nearly a century in the churchyard of St. Paul's Chapel. Sculptor Steve Tobin used its roots as the base for bronze sculpture next to Trinity Church.

The first Trinity Church building, a modest rectangular structure with a gambrel roof and small porch, was constructed in 1698. According to historical records, the infamous privateer Captain William Kidd lent the runner and tackle from his ship for hoisting the stones. [http://www.trinitywallstreet.org/history/?timeline]

Queen Anne of England increased the parish's land holdings to 215 acres (870,000 m²) in 1705. Later, in 1709, founded Trinity School as the of the church, and classes were originally held in the steeple of the church. In 1754, King's College (now ) was chartered by King George II of Great Britain and instruction began with eight students in a school building nearby the church.

During the the city became the British military and political base of operations in North America, following the departure of General and the shortly after and subsequent local defeats. Under British occupation clergy were required to be Loyalists, while the parishioners included some members of the revolutionary , as well as the First and es.

The church was destroyed in the . The fire that started in the Fighting Cocks Tavern destroyed nearly 500 buildings and houses and left thousands of New Yorkers homeless. Six days later, most of the city's volunteer firemen followed General Washington north.

The Rev. Dr. Samuel Provoost, was appointed Rector of Trinity (1784-1800) in 1784 and the New York State Legislature ratifies the charter of Trinity Church, deleting the provision that asserted its loyalty to the King of England. Whig patriots were appointed as vestrymen. In 1787, the Rev. Provoost was consecrated as the first Bishop of the newly formed Diocese of New York. Following his 1789 inauguration at Federal Hall, George Washington attended service, presided over by Bishop Provoost, at , a chapel of the Parish of Trinity Church. He continued to attend services there until the second Trinity Church was finished in 1790. St. Paul's Chapel is currently part of the Parish of Trinity Church and is the oldest public building in continuous use in New York City.

Construction on the second Trinity Church building began in 1788; it was consecrated in 1790. The structure was torn down after being weakened by severe snows during the winter of 1838&ndash;39. At the time of its completion, in 1846, its 281-foot spire and cross was the highest point in New York until being surpassed in 1890 by the .

In 1843, Trinity Church's expanding parish was divided due to the burgeoning cityscape and to better serve the needs of its parishioners. The newly formed parish would build Grace Church, to the north on Broadway at 10th street, while original parish would re-build the Trinity Church that stands today. Both Grace and Trinity Churches were completed and consecrated in 1846.

There are three burial grounds closely associated with Trinity Church. The first Trinity Churchyard, at Wall Street and Broadway, in which , William Bradford, , Captain and are buried. It is the only active cemetery remaining in the borough of Manhattan. The second is and Mausoleum on Riverside Drive at 155th Street, formerly the location of 's estate, in which are interred , , , and . The third is the Churchyard of St. Paul's Chapel.

The tower of Trinity Church currently contains 23 bells the heaviest of which weighs 27 cwt.

Eight of these were cast for the original tower and were hung for ringing in the English style, although it is unlikely they were ever rung in this way in the new tower. Three more were subsequently added. In 1946 they were adapted for swing chiming and sounded by electric motors.

A project to install a new ring of 12 additional bells was initially proposed in 2001 but put on hold in the aftermath of the attacks which were so close to the church. It finally came to fruition in 2006 with funding from the Dill Faulkes Educational Trust. These bells form the first ever ring of 12 installed in a church in the USA. The work was to be carried out by Taylors, Eayre and Smith of , England. The bells were installed in September 2006 and are now ringable. The excessive ringing of the bells for bell practice and tuning in September 2006 caused much concern to local residents, some of whose windows and residences are less than one hundred feet at eye level to the bell tower. A petition was started to stop the ringing of the bells, reflecting the changing nature of lower Manhattan to a residential area.

Details of the individual bells can be found at: [http://www.cccbr.org.uk/dove/detail.php?DoveID=NEW+YORK12 Dove's Guide for Church Bellringers] .

Trinity Church offers a full schedule of prayer and services throughout the week and is also available for special occasions such as weddings and baptisms. In addition its historical daily worship, Trinity Church provides Christian fellowship and outreach to the community, the city, the nation and the world.

Trinity Church also has a very rich music program. Their Concerts at One has been providing live professional classical and contemporary music for the Wall Street community since 1969. And the church has a several organized choirs including the Trinity Choir which is featured Sunday mornings on WQXR 96.3 FM in New York City.

The church also houses a museum with exhibits about the history of the church, as well as changing art, religious and cultural exhibits. Guided tours of the church are offered daily at 2 PM.