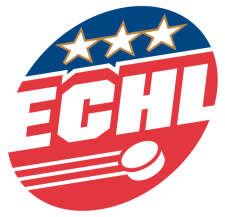 The ECHL (formerly the East Coast Hockey League) is a league based in , with teams scattered across the and , generally regarded as a tier below the . The ECHL's official website lists the league as "The Premier AA" league of hockey in North America, because most teams serve as feeder teams for teams. Hockey generally does not use letter-designations to define their league's levels, but the ECHL has tried for years to establish such a pecking order, with some success.

Since that time, the ECHL has met with a mixture of failures and successes, reaching its largest size in 2003 of 31 teams before being reduced to 28 teams for the 2004 season. In September 2002, the ceased operations, and the ECHL Board of Governors approved membership applications from the Anchorage (now Alaska) Aces, the , the , the , the , the and the San Diego Gulls as well as from teams in and . Alaska, Bakersfield, Fresno, Idaho, Las Vegas, Long Beach and San Diego began play in the 2003-04 season as expansion teams.

The teams from the defunct lower-level WCHL, along with Las Vegas, joined as expansion teams for the ECHL’s 16th season in 2003-04. In a change reflective of the nationwide presence of the ECHL, the East Coast Hockey League changed its name to simply ECHL on , .

The league, because of geographical anomalies, continues to use unbalanced conferences and divisions, which has in the past made for some extremely varied playoff formats and limited interconference play. Due to travel costs, the league has attempted to placate owners in keeping those costs down, which has led to the sometimes-odd playoff structures. The league currently (as of 2008) consists of ten West Coast-based teams in the National Conference, and thirteen eastern, midwestern and southern teams in the American Conference.

In the past four years, the ECHL has attempted to be more tech-friendly to its fans. Some improvements on the league's website have included a new schedule and statistics engine powered by League Stat, Inc. (introduced in 2006), internet radio coverage for most teams, and pay-per view broadcasting of ECHL games through B2 Networks. In 2008, the league introduced the ECHL toolbar for internet browsers which gave users short cut access to statistics, scores, transactions, and news updates. [cite web | last = | first = | title = ECHL Toolbar Available Now | publisher = ECHL | date = July 14, 2008 | url = http://www.echl.com/cgi-bin/mpublic.cgi?action=show_news&cat=1&id=15674| accessdatee = July 15, 2008]

One team is scheduled to relocate for the 2009-10 season and two which were previously under suspension will return with new home arenas. [ [http://www.echl.com/fteams.shtml ECHL - Future Teams and Other Markets] ]

Teams that no longer play within the ECHL are listed below. Many of the former teams which had not moved are considered to have suspended operations and the franchises placed for sale, but in reality are and were simply financial failures, similar to defunct teams in all other minor league sports histories.

While the ECHL stated in recent years they would not grant voluntary suspensions of franchises for more than one year, both the Toledo Storm and Mississippi Sea Wolves have had two-year suspensions -- the Sea Wolves because of and the Storm in order to demolish their present arena and construct a new arena on the site. The new owners of the Toledo franchise, the businessmen who own the area AAA-baseball team the , have stated they will choose a new name for the team. Toledo Arena Sports General Manager Joe Napoli and Toledo Arena Sports President Mike Miller unveiled the new name on [http://www.toledowalleye.com/news/ February 20, 2008] . The Mississippi Sea Wolves resumed play for the 2007-2008 season, while the Toledo Walleye will return to play for the 2009-2010 season.

In celebration of the league's 20th year of play, the ECHL Board of Governors created the ECHL Hall of Fame in 2008, to recognize the achievements of players, coaches, and personnel who dedicated their careers to the league. Hall of Fame members are selected in four categories: Player, Developmental Player, Builder, and Referee/Linesman. Players must have concluded their career as an active player for a minimum of three playing seasons, though not continuous or full seasons. Development Players must have begun their career in the ECHL and went on to a distinguished career in the NHL, playing a minimum of 260 regular season games in the NHL, AHL and ECHL. Builders may be active or inactive whereas Referee/Linesman must have concluded their active officiating career for a minimum of three playing seasons.

The nomination and subsequent selection of candidates is determined by the ECHL Hall of Fame Selection Committee which is appointed by the ECHL.

The ECHL Hall of Fame Inaugural Class was inducted during the 2008 festivities at in and included ECHL founder , the ECHL's first commissioner , and former players and