In statistics, a meta-analysis combines the results of several studies that address a set of related research hypotheses. In its simplest form, this is normally by identification of a common measure of effect size, for which a weighted average might be the output of a meta-analyses. Here the weighting might be related to sample sizes within the individual studies. More generally there are other differences between the studies that need to be allowed for, but the general aim of a meta-analysis is to more powerfully estimate the true "effect size" as opposed to a smaller "effect size" derived in a single study under a given single set of assumptions and conditions.

Meta-analyses are often, but not always, important components of a systematic review procedure. Here it is convenient to follow the terminology used by the Cochrane Collaboration,[1] and use "meta-analysis" to refer to statistical methods of combining evidence, leaving other aspects of 'research synthesis' or 'evidence synthesis', such as combining information from qualitative studies, for the more general context of systematic reviews.

The term "meta-analysis" was coined by Gene V. Glass.[2]

The first meta-analysis was performed by Karl Pearson in 1904, in an attempt to overcome the problem of reduced statistical power in studies with small sample sizes; analyzing the results from a group of studies can allow more accurate data analysis.[3][4] However, the first meta-analysis of all conceptually identical experiments concerning a particular research issue, and conducted by independent researchers, has been identified as the 1940 book-length publication Extra-sensory perception after sixty years, authored by Duke University psychologists J. G. Pratt, J. B. Rhine, and associates.[5] This encompassed a review of 145 reports on ESP experiments published from 1882 to 1939, and included an estimate of the influence of unpublished papers on the overall effect (the file-drawer problem). Although meta-analysis is widely used in epidemiology and evidence-based medicine today, a meta-analysis of a medical treatment was not published until 1955. In the 1970s, more sophisticated analytical techniques were introduced in educational research, starting with the work of Gene V. Glass, Frank L. Schmidt and John E. Hunter.

Gene V Glass was the first modern statistician to formalize the use of meta-analysis, and is widely recognized as the modern founder of the method. The online Oxford English Dictionary lists the first usage of the term in the statistical sense as 1976 by Glass.[2][6] The statistical theory surrounding meta-analysis was greatly advanced by the work of Nambury S. Raju, Larry V. Hedges, Harris Cooper, Ingram Olkin, John E. Hunter, Jacob Cohen, Thomas C. Chalmers, Robert Rosenthal and Frank L. Schmidt.

Steps in a meta-analysis

1. Formulation of the problem

4. Decide which dependent variables or summary measures are allowed. For instance:

in which μt is the treatment mean, μc is the control mean, σ2 the pooled variance.

Generally, three types of models can be distinguished in the literature on meta-analysis: simple regression, fixed effect meta-regression and random effects meta-regression.

The model can be specified as

Where yj is the effect size in study j and β0 (intercept) the estimated overall effect size. The variables

Random effects meta-regression rests on the assumption that θ in

is a random variable following a (hyper-)distribution

A random effects meta-regression is called a mixed effects model when moderators are added to the model.

is the variance of the effect size in study j. Between study variance

Which model to choose

Modern statistical meta-analysis does more than just combine the effect sizes of a set of studies. It can test if the outcomes of studies show more variation than the variation that is expected because of sampling different research participants. If that is the case, study characteristics such as measurement instrument used, population sampled, or aspects of the studies' design are coded. These characteristics are then used as predictor variables to analyze the excess variation in the effect sizes. Some methodological weaknesses in studies can be corrected statistically. For example, it is possible to correct effect sizes or correlations for the downward bias due to measurement error or restriction on score ranges.

Meta-analysis leads to a shift of emphasis from single studies to multiple studies. It emphasizes the practical importance of the effect size instead of the statistical significance of individual studies. This shift in thinking has been termed "meta-analytic thinking". The results of a meta-analysis are often shown in a forest plot.

Results from studies are combined using different approaches. One approach frequently used in meta-analysis in health care research is termed 'inverse variance method'. The average effect size across all studies is computed as a weighted mean, whereby the weights are equal to the inverse variance of each studies' effect estimator. Larger studies and studies with less random variation are given greater weight than smaller studies. Other common approaches include the Mantel–Haenszel method[10] and the Peto method.

A recent approach to studying the influence that weighting schemes can have on results has been proposed through the construct of combinatorial meta-analysis.

Signed differential mapping is a statistical technique for meta-analyzing studies on differences in brain activity or structure which used neuroimaging techniques such as fMRI, VBM or PET.

Meta-analysis can never follow the rules of hard science, for example being double-blind, controlled, or proposing a way to falsify the theory in question. It is only a statistical examination of scientific studies, not an actual scientific study, itself.

Some have argued that a weakness of the method is that sources of bias are not controlled by the method. A good meta-analysis of badly designed studies will still result in bad statistics, according to Robert Slavin. Slavin has argued that only methodologically sound studies should be included in a meta-analysis, a practice he calls 'best evidence meta-analysis'. Other meta-analysts would include weaker studies, and add a study-level predictor variable that reflects the methodological quality of the studies to examine the effect of study quality on the effect size. However, Glass argued that the better approach preserves variance in the study sample, casting as wide a net as possible, and that methodological selection criteria introduce unwanted subjectivity, defeating the purpose of the approach. 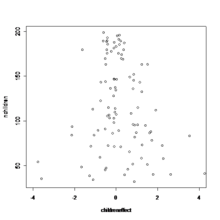 A funnelplot expected without the file drawer problem 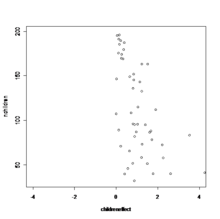 A funnelplot expected with the file drawer problem

Another weakness of the method is the heavy reliance on published studies, which may create exaggerated outcomes, as it is very hard to publish studies that show no significant results. For any given research area, one cannot know how many studies have been conducted but never reported and the results filed away.[11]

This file drawer problem results in the distribution of effect sizes that are biased, skewed or completely cut off, creating a serious base rate fallacy, in which the significance of the published studies is overestimated. For example, if there were fifty tests, and only ten got results, then the real outcome is only 20% as significant as it appears, except that the other 80% were not submitted for publishing, or thrown out by publishers as uninteresting. This should be seriously considered when interpreting the outcomes of a meta-analysis.[11][12]

This can be visualized with a funnel plot which is a scatter plot of sample size and effect sizes. There are several procedures available that attempt to correct for the file drawer problem, once identified, such as guessing at the cut off part of the distribution of study effects.

Other weaknesses are Simpson's Paradox (two smaller studies may point in one direction, and the combination study in the opposite direction); the coding of an effect is subjective; the decision to include or reject a particular study is subjective; there are two different ways to measure effect: correlation or standardized mean difference; the interpretation of effect size is purely arbitrary; it has not been determined if the statistically most accurate method for combining results is the fixed effect model or the random effects model; and, for medicine, the underlying risk in each studied group is of significant importance, and there is no universally agreed-upon way to weight the risk.

The example provided by the Rind et al. controversy illustrates an application of meta-analysis which has been the subject of subsequent criticisms of many of the components of the meta-analysis.

The most severe weakness and abuse of meta-analysis often occurs when the person or persons doing the meta-analysis have an economic, social, or political agenda such as the passage or defeat of legislation. Those persons with these types of agenda have a high likelihood to abuse meta-analysis due to personal bias. For example, researchers favorable to the author's agenda are likely to have their studies "cherry picked" while those not favorable will be ignored or labeled as "not credible". In addition, the favored authors may themselves be biased or paid to produce results that support their overall political, social, or economic goals in ways such as selecting small favorable data sets and not incorporating larger unfavorable data sets.

If a meta-analysis is conducted by an individual or organization with a bias or predetermined desired outcome, it should be treated as highly suspect or having a high likelihood of being "junk science". From an integrity perspective, researchers with a bias should avoid meta-analysis and use a less abuse-prone (or independent) form of research.

A 2011 study done to disclose possible conflicts of interests in underlying research studies used for medical meta-analyses reviewed 29 meta-analyses and found that conflicts of interests in the studies underlying the meta-analyses were rarely disclosed. The 29 meta-analyses included 11 from general medicine journals; 15 from specialty medicine journals, and 3 from the Cochrane Database of Systematic Reviews. The 29 meta-analyses reviewed an aggregate of 509 randomized controlled trials (RCTs). Of these, 318 RCTs reported funding sources with 219 (69%) industry funded. 132 of the 509 RCTs reported author conflict of interest disclosures, with 91 studies (69%) disclosing industry financial ties with one or more authors. The information was, however, seldom reflected in the meta-analyses. Only two (7%) reported RCT funding sources and none reported RCT author-industry ties. The authors concluded “without acknowledgment of COI due to industry funding or author industry financial ties from RCTs included in meta-analyses, readers’ understanding and appraisal of the evidence from the meta-analysis may be compromised.”[13]