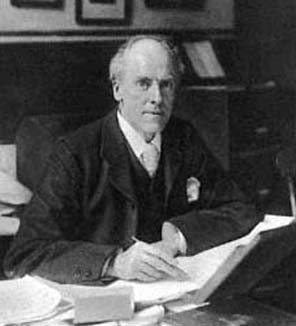 In 1911 he founded the world's first university statistics department at . He was a controversial proponent of , and a protégé and of Sir Francis Galton.

A conference was held in London on , to celebrate the 150th anniversary of his birth.

Pearson's mother, née Fanny Smith, came from a family of master mariners who sailed their own ships from Hull; his father read law at and was a successful barrister and (QC). William Pearson's father's family came from the . The family grave is at Crambe, near York. Its motto, "ERIMUS" means "We shall be", and is also the motto of the coat-of-arms.

"Carl Pearson" inadvertently became "Karl Pearson" when he enrolled at the in 1879, which changed the spelling. He used both variants of his name until 1884 when he finally adopted Karl - supposedly also after Fact|date=January 2008, though some argue otherwise. [Porter, Theodore M. (2004): "Karl Pearson: The Scientific Life in a Statistical Age", Princeton University Press. pg.78] Eventually he became universally known as "KP".

Karl and Maria Pearson had two daughters, Sigrid Loetitia Pearson and Helga Sharpe Pearson, and one son, Egon Sharpe Pearson. Egon Pearson became an eminent statistician himself, establishing the . He succeeded his father as head of the Applied Statistics Department at University College.

Karl Pearson was educated privately at , after which he went to in 1876 to study mathematics. He then spent part of 1879 and 1880 studying medieval and 16th century at the universities of and &ndash; in fact, he became sufficiently knowledgeable in this field that he was offered a post at .

He graduated from Cambridge University in 1879 as Third in the . He then travelled to Germany to study physics at the under and metaphysics under . He next visited the , where he attended the lectures of the famous physiologist on (Emil was a brother of , the mathematician). Other subjects which he studied in Berlin included Roman Law, taught by and , medieval and 16th century German Literature, and Socialism. He was strongly influenced by the courses he attended at this time and he became sufficiently expert on German literature that he was offered a post in the German Department of Cambridge University. On returning to England in 1880, Pearson first went to Cambridge:- "Back in Cambridge, I worked in the engineering shops, but drew up the schedule in Mittel- and Althochdeutsch for the Medieval Languages Tripos."

In his first book, "The New Werther", Pearson gives a clear indication of why he studied so many diverse subjects:- "I rush from science to philosophy, and from philosophy to our old friends the poets; and then, over-wearied by too much idealism, I fancy I become practical in returning to science. Have you ever attempted to conceive all there is in the world worth knowing - that not one subject in the universe is unworthy of study? The giants of literature, the mysteries of many-dimensional space, the attempts of Boltzmann and Crookes to penetrate Nature's very laboratory, the Kantian theory of the universe, and the latest discoveries in embryology, with their wonderful tales of the development of life - what an immensity beyond our grasp! ... Mankind seems on the verge of a new and glorious discovery. What Newton did to simplify the planetary motions must now be done to unite in one whole the various isolated theories of mathematical physics. "

Pearson then returned to London to study law so that he might, like his father, be called to the Bar. Quoting Pearson's own account: "Coming to London, I read in chambers in Lincoln's Inn, drew up bills of sale, and was called to the Bar, but varied legal studies by lecturing on heat at Barnes, on Martin Luther at Hampstead, and on Lasalle and Marx on Sundays at revolutionary clubs around Soho."

His next career move was to , where he read until 1881 (although he never practised). After this, he returned to , deputizing for the mathematics at in 1881 and for the professor at in 1883. In 1884, he was appointed to the Goldsmid Chair of Applied Mathematics and Mechanics at University College London. 1891 saw him also appointed to the professorship of at ; here he met , a zoologist who had some interesting problems requiring quantitative solutions. The collaboration, in and ary theory, was a fruitful one and lasted until Weldon died in 1906. Weldon introduced Pearson to 's cousin , who was interested in aspects of evolution such as heredity and . Pearson became Galton's protégé &mdash; his "statistical heir" as some have put it &mdash; at times to the verge of .

After Galton's death in 1911, Pearson embarked on producing his definitive biography&mdash;a three-volume tome of narrative, letters, genealogies, commentaries, and photographs&mdash;published in 1914, 1924, and 1930, with much of Pearson's own financing paying for their print runs. The biography, done "to satisfy myself and without regard to traditional standards, to the needs of publishers or to the tastes of the reading public", triumphed Galton's life, work, and personal heredity. He predicted that Galton, rather than , would be remembered as the most prodigious grandson of .

When Galton died, he left the residue of his estate to the for a Chair in Eugenics. Pearson was the first holder of this chair—the "Galton Chair of Eugenics", later the "Galton Chair of Genetics" [ [http://thescorp.multics.org/23race.html Race, Intelligence and Bias in Academe] by Roger Pearson Scott-Townsend Publishers, 1991, 304 pp.] —in accordance with Galton's wishes. He formed the Department of Applied Statistics (with financial support from the ), into which he incorporated the Biometric and Galton laboratories. He remained with the department until his retirement in 1933, and continued to work until his death in 1936.

When the 23 year-old started a study group, the , with his two younger friends, and , he suggested that the first book to be read was Pearson's "". This book covered several themes that were later to become part of the theories of Einstein and other scientists. Pearson asserted that the laws of nature are relative to the perceptive ability of the observer. Irreversibility of natural processes, he claimed, is a purely relative conception. An observer who travels at the exact velocity of light would see an eternal now, or an absence of motion. He speculated that an observer who traveled faster than light would see time reversal, similar to a cinema film being run backwards. Pearson also discussed , the , and wrinkles in time.

Pearson's relativity was based on , in the sense of ideas or pictures in a . "There are many signs," he wrote, "that a sound idealism is surely replacing, as a basis for natural philosophy, the crude of the older physicists." (Preface to 2nd Ed., "") Further, he stated, "...science is in reality a classification and analysis of the contents of the mind...." "In truth, the field of science is much more than an external world." 6

An aggressive eugenicist who applied his social Darwinism to entire nations, Pearson openly advocated "war" against "inferior races," and saw this as a logical implication of his scientific work on human measurement: "My view &ndash; and I think it may be called the scientific view of a nation," he wrote, "&ndash; is that of an organized whole, kept up to a high pitch of internal efficiency by insuring that its numbers are substantially recruited from the better stocks, and kept up to a high pitch of external efficiency by contest, chiefly by way of war with inferior races." He reasoned that, if 's theory of germ plasm is correct, then the nation is wasting money when it tries to improve people who come from poor stock. Weismann claimed that acquired characteristics could not be inherited. Therefore, training benefits only the trained generation. Their children will not exhibit the learned improvements and, in turn, will need to be improved. "No degenerate and feeble stock will ever be converted into healthy and sound stock by the accumulated effects of education, good laws, and sanitary surroundings. Such means may render the individual members of a stock passable if not strong members of society, but the same process will have to be gone through again and again with their offspring, and this in ever-widening circles, if the stock, owing to the conditions in which society has placed it, is able to increase its numbers." (Introduction, "").

"History shows me one way, and one way only, in which a high state of civilization has been produced, namely, the struggle of race with race, and the survival of the physically and mentally fitter race. If you want to know whether the lower races of man can evolve a higher type, I fear the only course is to leave them to fight it out among themselves, and even then the struggle for existence between individual and individual, between tribe and tribe, may not be supported by that physical selection due to a particular climate on which probably so much of the Aryan's success depended . . ."(Karl Pearson, National Life from the Standpoint of Science [London, 1905] )

Ironically, Pearson was known in his lifetime as a prominent "freethinker" and socialist. He gave lectures on such issues as "the woman's question" (this was the era of the suffragist movement in the UK) and upon . His commitment to and its ideals led him to refuse the offer of being created an OBE (Officer of the Order of the British Empire) in 1920, and also to refuse a in 1935.

Pearson achieved widespread recognition across a range of disciplines and his membership of, and awards from, various professional bodies reflects this:
*1896: elected FRS: Fellow of the

Pearson's work was all-embracing in the wide application and development of mathematical statistics, and encompassed the fields of , , anthropometry, and social . In 1901, with Weldon and Galton, he founded the journal "" whose object was the development of statistical theory. He edited this journal until his death. He also founded the journal "Annals of Eugenics" (now "") in 1925. He published the " Research Memoirs" largely to provide a record of the output of the Department of Applied Statistics not published elsewhere.

Pearson's thinking underpins many of the 'classical' statistical methods which are in common use today. Some of his main contributions are:

# and - Pearson was instrumental in the development of this theory. One of his classic data sets (originally collected by Galton) involves the regression of sons' height upon that of their fathers'. Pearson built a 3-dimensional model of this data set (which remains in the care of the Statistical Science Department) to illustrate the ideas. The is named after him, and it was the first important to be introduced into statistics.
#Classification of distributions - Pearson's work on classifying s forms the basis for a lot of modern statistical theory; in particular, the of distributions underlies the theory of s.
# - A particular kind of , a statistical test of significance.
# and two coefficients of skewness [ [http://cc.ysu.edu/~eeusip/glossary.htm] ]

*
*
*
*
* , a close friend and contemporary of Karl Pearson at and Cambridge University
* List of Gresham Professors of Geometry
*

Additional information from [http://royalsociety.org/DServe/dserve.exe?dsqIni=Dserve.ini&dsqApp=Archive&dsqCmd=Show.tcl&dsqDb=Persons&dsqPos=3&dsqSearch=(((text)='karl')AND((text)='pearson')) entry for Karl Pearson in the Sackler Digital Archive of the Royal Society]

*MacTutor Biography|id=Pearson
*MathGenealogy|id=30176
* John Aldrich's [http://www.economics.soton.ac.uk/staff/aldrich/kpreader.htm Karl Pearson: a Reader's Guide] at the University of Southampton (contains many useful links to further sources of information).
* Encyclopaedia Britannica [http://www.britannica.com/eb/article-9058886/Karl-Pearson Karl Pearson]
* Gavan Tredoux's Francis Galton site, [http://galton.org galton.org] , contains Pearson's biography of Francis Galton, and several other papers - in addition to nearly all of Galton's own published works.
* [http://www.rutherfordjournal.org/article010107.html Karl Pearson and the Origins of Modern Statistics] at The Rutherford Journal.
* http://www.crambe.net/williampearson.pdf and [http://www.crambe.net/p.html text on family grave] at Crambe: ERIMUS ("apparently this means [http://archives.nd.edu/erimus.htm "We shall be"] ), and is particularly associated with and : "Yarm has been; Stockton is; and we shall be".