It tests a null hypothesis stating that the frequency distribution of certain events observed in a sample is consistent with a particular theoretical distribution. The events considered must be mutually exclusive and have total probability 1. A common case for this is where the events each cover an outcome of a categorical variable. A simple example is the hypothesis that an ordinary six-sided die is "fair", i.e., all six outcomes are equally likely to occur.

Pearson's chi-squared is used to assess two types of comparison: tests of goodness of fit and tests of independence.

The first step in the chi-squared test is to calculate the chi-squared statistic. In order to avoid ambiguity, the value of the test-statistic is denoted by Χ2 rather than χ2 (which is either an uppercase chi instead of lowercase, or an upper case roman X); this also serves as a reminder that the distribution of the test statistic is not exactly that of a chi-squared random variable. However some authors do use the χ2 notation for the test statistic. An exact test which does not rely on using the approximate χ2 distribution is Fisher's exact test: this is substantially more accurate in evaluating the significance level of the test, especially with small numbers of observations.

Test for fit of a distribution

In this case N observations are divided among n cells. A simple application is to test the hypothesis that, in the general population, values would occur in each cell with equal frequency. The "theoretical frequency" for any cell (under the null hypothesis of a discrete uniform distribution) is thus calculated as

and the reduction in the degrees of freedom is p = 1, notionally because the observed frequencies Oi are constrained to sum to N.

The value of the test-statistic is

Χ2 = Pearson's cumulative test statistic, which asymptotically approaches a χ2 distribution.
Oi = an observed frequency;
Ei = an expected (theoretical) frequency, asserted by the null hypothesis;
n = the number of cells in the table. 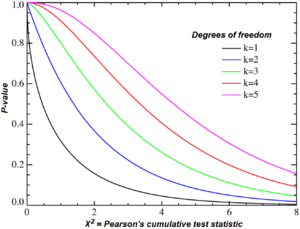 Chi-squared distribution, showing X2 on the x-axis and P-value on the y-axis.

The result about the number of degrees of freedom is valid when the original data was multinomial and hence the estimated parameters are efficient for minimizing the chi-squared statistic. More generally however, when maximum likelihood estimation does not coincide with minimum chi-squared estimation, the distribution will lie somewhere between a chi-squared distribution with n − 1 − p and n − 1 degrees of freedom (See for instance Chernoff and Lehmann, 1954).

For more details on this topic, see Categorical distribution#Bayesian statistics.

In Bayesian statistics, one would instead use a Dirichlet distribution as conjugate prior. If one took a uniform prior, then the maximum likelihood estimate for the population probability is the observed probability, and one may compute a credible region around this or another estimate.

In this case, an "observation" consists of the values of two outcomes and the null hypothesis is that the occurrence of these outcomes is statistically independent. Each observation is allocated to one cell of a two-dimensional array of cells (called a table) according to the values of the two outcomes. If there are r rows and c columns in the table, the "theoretical frequency" for a cell, given the hypothesis of independence, is

where N is the total sample size (the sum of all cells in the table). The value of the test-statistic is

For the test of independence, a chi-squared probability of less than or equal to 0.05 (or the chi-squared statistic being at or larger than the 0.05 critical point) is commonly interpreted by applied workers as justification for rejecting the null hypothesis that the row variable is independent of the column variable.[2] The alternative hypothesis corresponds to the variables having an association or relationship where the structure of this relationship is not specified.

The chi-squared test, when used with the standard approximation that a chi-squared distribution is applicable, has the following assumptions:[citation needed]

For example, to test the hypothesis that a random sample of 100 people has been drawn from a population in which men and women are equal in frequency, the observed number of men and women would be compared to the theoretical frequencies of 50 men and 50 women. If there were 44 men in the sample and 56 women, then

If the null hypothesis is true (i.e., men and women are chosen with equal probability in the sample), the test statistic will be drawn from a chi-squared distribution with one degree of freedom. Though one might expect two degrees of freedom (one each for the men and women), we must take into account that the total number of men and women is constrained (100), and thus there is only one degree of freedom (2 − 1). Alternatively, if the male count is known the female count is determined, and vice-versa.

Consultation of the chi-squared distribution for 1 degree of freedom shows that the probability of observing this difference (or a more extreme difference than this) if men and women are equally numerous in the population is approximately 0.23. This probability is higher than conventional criteria for statistical significance (.001-.05), so normally we would not reject the null hypothesis that the number of men in the population is the same as the number of women (i.e. we would consider our sample within the range of what we'd expect for a 50/50 male/female ratio.)

In cases where the expected value, E, is found to be small (indicating either a small underlying population probability, or a small number of observations), the normal approximation of the multinomial distribution can fail, and in such cases it is found to be more appropriate to use the G-test, a likelihood ratio-based test statistic. Where the total sample size is small, it is necessary to use an appropriate exact test, typically either the binomial test or (for contingency tables) Fisher's exact test; but note that this test assumes fixed and known marginal totals.

The null distribution of the Pearson statistic with j rows and k columns is approximated by the chi-squared distribution with (k − 1)(j − 1) degrees of freedom.[3]

This approximation arises as the true distribution, under the null hypothesis, if the expected value is given by a multinomial distribution. For large sample sizes, the central limit theorem says this distribution tends toward a certain multivariate normal distribution.

In the special case where there are only two cells in the table, the expected values follow a binomial distribution,

p = probability, under the null hypothesis,
n = number of observations in the sample.

In the above example the hypothesised probability of a male observation is 0.5, with 100 samples. Thus we expect to observe 50 males.

Let O1 be the number of observations from the sample that are in the first cell. The Pearson test statistic can be expressed as

which can in turn be expressed as

By the normal approximation to a binomial this is the squared of one standard normal variate, and hence is distributed as chi-squared with 1 degree of freedom. Note that the denominator is one standard deviation of the Gaussian approximation, so can be written

So as consistent with the meaning of the chi-squared distribution, we are measuring how probable the observed number of standard deviations away from the mean is under the Gaussian approximation (which is a good approximation for large n).

The chi-squared distribution is then integrated on the right of the statistic value to obtain the P-value, which is equal to the probability of getting a statistic equal or bigger than the observed one, assuming the null hypothesis.

When the test is applied to a contingency table containing two rows and two columns, the test is equivalent to a Z-test of proportions.

Similar arguments as above lead to the desired result.[citation needed] Each cell (except the final one, whose value is completely determined by the others) is treated as an independent binomial variable, and their contributions are summed and each contributes one degree of freedom.