Osteopontin (OPN), also known as bone sialoprotein I (BSP-1 or BNSP), early T-lymphocyte activation (ETA-1), secreted phosphoprotein 1 (SPP1), 2ar and Rickettsia resistance (Ric), is a human gene product,[1] which is also conserved in other species. Osteopontin is a SIBLING glycoprotein that was first identified in 1986 in osteoblasts.

The prefix of the word "osteo" indicates that the protein is expressed in bone, although it is also expressed in other tissues. The suffix "-pontin" is derived from "pons," the Latin word for bridge, and signifies osteopontin's role as a linking protein. Osteopontin is an extracellular structural protein and therefore an organic component of bone. Synonyms for this protein include sialoprotein I and 44K BPP (bone phosphoprotein).

The gene has 7 exons, spans 5 kilobases in length and in humans it is located on the long arm of chromosome 4 region 13 (4q13). The protein is composed of ~300 amino acids residues and has ~30 carbohydrate residues attached including 10 sialic acid residues, which are attached to the protein during post-translational modification in the Golgi apparatus. The protein is rich in acidic residues: 30-36% are either aspartic or glutamic acid.

OPN is a highly negatively charged, extracellular matrix protein that lacks an extensive secondary structure.[2] It is composed of about 300 amino acids (297 in mouse; 314 in human) and is expressed as a 33-kDa nascent protein; there are also functionally important cleavage sites. OPN can go through posttranslational modifications which increase its apparent molecular weight to about 44 kDa.[3] The OPN gene is composed of 7 exons, 6 of which contain coding sequence.[4][5] The first two exons contain the 5' untranslated region (5' UTR).[6] Exons 2, 3, 4, 5, 6, and 7 code for 17, 13, 27, 14, 108 and 134 amino acids, respectively.[6] All intron-exon boundaries are of the phase 0 type, thus alternative exon splicing maintains the reading frame of the OPN gene.

Full length OPN (OPN-FL) can be modified by thrombin cleavage, which exposes a cryptic sequence, SVVYGLR on the cleaved form of the protein known as OPN-R (Fig. 1). This thrombin-cleaved OPN (OPN-R) exposes an epitope for integrin receptors of α4β1, α9β1, and α9β4.[7][8] These integrin receptors are present on a number of immune cells such as mast cells,[9] neutrophils,[10] and T cells. It is also expressed by monocytes and macrophages.[11] Upon binding these receptors, cells use several signal transduction pathways to elicit immune responses in these cells (See Section 3 for more detail). OPN-R can be further cleaved by Carboxypeptidase B (CPB) by removal of C-terminal arginine and become OPN-L (Fig. 2). The function of OPN-L is largely unknown.

Regulation of the osteopontin gene is incompletely understood. Different cell types may differ in their regulatory mechanisms of the OPN gene. OPN expression in bone predominantly occurs by osteoblasts and osteocyctes (bone-forming cells) as well as osteoclasts (bone-resorbing cells).[23] Runx2 (aka Cbfa1) and osterix (Osx) transcription factors are required for the expression of OPN [24] Runx2 and Osx bind promoters of osteoblast-specific genes such as Col1α1, Bsp, and Opn and upregulate transcription.[25]

Hypocalcemia and hypophosphatemia (instances that stimulate kidney proximal tubule cells to produce calcitriol (1α,25-dihydroxyvitamin D3)) lead to increases in OPN transcription, translation and secretion.[26] This is due to the presence of a high-specificity vitamin D response element (VDRE) in the OPN gene promoter.[27][28][29]

Extracellular inorganic phosphate (ePi) has also been identified as a modulator of OPN expression.[30]

Osteopontin has been implicated as an important factor in bone remodeling.[36] Specifically, research suggests it plays a role in anchoring osteoclasts to the mineral matrix of bones.[9] The organic part of bone is about 20% of the dry weight, and counts in, other than osteopontin, collagen type I, osteocalcin, osteonectin, bone sialo protein and alkaline phosphatase. Collagen type I counts for 90% of the protein mass. The inorganic part of bone is the mineral hydroxyapatite, Ca10(PO4)6(OH)2. Loss of this mineral may lead to osteoporosis, as the bone is depleted for calcium if this is not supplied in the diet.

OPN serves to initiate the process by which osteoclasts develop their ruffled borders to begin bone resorption. It is also found in urine, where it inhibits kidney stone formation.

As discussed, OPN binds to several integrin receptors including α4β1, α9β1, and α9β4 expressed by leukocytes. These receptors have been well-established to function in cell adhesion, migration, and survival in these cells. Therefore, recent research efforts have focused on the role of OPN in mediating such responses.

Osteopontin (OPN) is expressed in a range of immune cells, including macrophages, neutrophils, dendritic cells, and T and B cells, with varying kinetics. OPN is reported to act as an immune modulator in a variety of manners.[2] Firstly, it has chemotactic properties, which promote cell recruitment to inflammatory sites. It also functions as an adhesion protein, involved in cell attachment and wound healing. In addition, OPN mediates cell activation and cytokine production, as well as promoting cell survival by regulating apoptosis.[2] The following examples are found.[2]

OPN plays an important role in neutrophil recruitment in alcoholic liver disease.[10][37] OPN is important for the migration of neutrophil in vitro.[38] In addition, OPN recruits inflammatory cells to arthritis joints in the collagen-induced arthritis model of rheumatoid arthritis.[39][40] A recent in vitro study in 2008 has found that OPN plays a role in mast cell migration.[41] Here OPN knock-out mast cells were cultured and they observed a decreased level of chemotaxis in these cells compared to wildtype mast cells. OPN was also found to act as a macrophage chemotactic factor.[42] In this study, researchers looked at the accumulation of macrophages in the brain of rhesus monkeys and found that OPN prevented macrophages from leaving the accumulation site, indicating an increased level of chemotaxis.

Activated T cells are promoted by IL-12 to differentiate towards the Th1 type, producing cytokines including IL-12 and IFNγ. OPN inhibits production of the Th2 cytokine IL-10, which leads to enhanced Th1 response. OPN influences cell-mediated immunity and has Th1 cytokine functions. It enhances B cell immunoglobulin production and proliferation.[2] Recent studies in 2008 suggest that OPN also induces mast cell degranulation.[41] The researchers here observed that IgE-mediated anaphylaxis was significantly reduced in OPN knock-out mice compared to wild type mice. The role of OPN in activation of macrophages has also been implicated in a cancer study, when researchers discovered that OPN-producing tumors were able to induce macrophage activation compared to OPN-deficient tumors.[43] 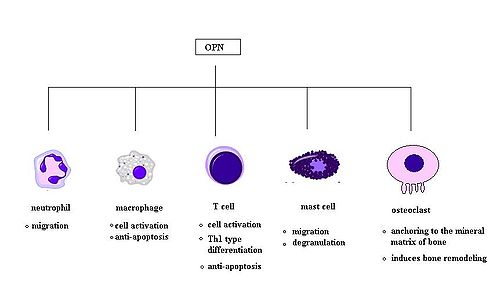 OPN is an important anti-apoptotic factor in many circumstances. OPN blocks the activation-induced cell death of macrophages and T cells as well as fibroblasts and endothelial cells exposed to harmful stimuli.[44][45] OPN prevents non-programmed cell death in inflammatory colitis.[46]

The fact that OPN interacts with multiple cell surface receptors which are ubiquitously expressed makes it an active player in many physiological and pathological processes including wound healing, bone turnover, tumorigenesis, inflammation, ischemia and immune responses1. Therefore, manipulation of plasma OPN levels may be useful in the treatment of autoimmune diseases, cancer metastasis, osteoporosis and some forms of stress.[2]

Role in cancers and inflammatory diseases

It has been shown that OPN drives IL-17 production;[50] OPN is overexpressed in a variety of cancers, including lung cancer, breast cancer, colorectal cancer, stomach cancer, ovarian cancer, papillary thyroid carcinoma, melanoma and pleural mesothelioma; OPN contributes both glomerulonephritis and tubulointerstitial nephritis; and OPN is found in atheromatous plaques within arteries. Thus, manipulation of plasma OPN levels may be useful in the treatment of autoimmune diseases, cancer metastasis, osteoporosis and some forms of stress.[2]

Research has implicated osteopontin in excessive scar-forming and a gel has been developed to inhibit its effect.[51]

Role in allergy and asthma

Osteopontin has recently been associated with allergic inflammation and asthma. Using a murine model of allergic inflammation, it was demonstrated that OPN-s, the secreted form of OPN, exerts opposing effects on mouse Th2 effector responses and subsequent allergic airway disease: pro-inflammatory at primary systemic sensitization, and anti-inflammatory during secondary pulmonary antigenic challenge, mainly through the regulation of different dendritic cell subsets.[52] OPN deficiency was also reported to protect against remodeling and bronchial hyperresponsiveness (BHR), again using a chronic allergen-challenge model of airway remodeling.[53] Furthermore, it was recently demonstrated that OPN expression is upregulated in human asthma, is associated with remodeling changes and its subepithelial expression correlates to disease severity.[54]

Role in muscle disease and injury