Sound pressure level (SPL) or sound level is a logarithmic measure of the effective sound pressure of a sound relative to a reference value. It is measured in decibels (dB) above a standard reference level. The commonly used "zero" reference sound pressure in air is 20 µPa RMS, which is usually considered the threshold of human hearing (at 1 kHz).

The instantaneous sound pressure is the deviation from the local ambient pressure p0 caused by a sound wave at a given location and given instant in time.

Total pressure ptotal is given by:

The acoustic impedance is given by[1]

When measuring the sound created by an object, it is important to measure the distance from the object as well, since the sound pressure decreases with distance from a point source with a 1/r relationship (and not 1/r2, like sound intensity).

The distance law for the sound pressure p in 3D is inverse-proportional to the distance r of a punctual sound source.

, is measured at a distance

, one can calculate the sound pressure

The sound pressure may vary in direction from the source, as well, so measurements at different angles may be necessary, depending on the situation. An obvious example of a source that varies in level in different directions is a bullhorn.

Sound pressure level (SPL) or sound level Lp is a logarithmic measure of the effective sound pressure of a sound relative to a reference value. It is measured in decibels (dB) above a standard reference level.

Sometimes variants are used such as dB (SPL), dBSPL, or dBSPL. These variants are not recognized as units in the SI.[3] The unit dB (SPL) is sometimes abbreviated to just "dB", which can give the erroneous impression that a dB is an absolute unit by itself.

The commonly used reference sound pressure in air is pref = 20 µPa (rms), which is usually considered the threshold of human hearing (roughly the sound of a mosquito flying 3 m away). Most sound level measurements will be made relative to this level, meaning 1 pascal will equal SPL of 94 dB. In other media, such as underwater, a reference level of 1 µPa is more often used.[4] These references are defined in ANSI S1.1-1994.[5]

The distance of the measuring microphone from a sound source is often omitted when SPL measurements are quoted, making the data useless. In the case of ambient environmental measurements of "background" noise, distance need not be quoted as no single source is present, but when measuring the noise level of a specific piece of equipment the distance should always be stated. A distance of one metre (1 m) from the source is a frequently-used standard distance. Because of the effects of reflected noise within a closed room, the use of an anechoic chamber allows for sound to be comparable to measurements made in a free field environment.

The lower limit of audibility is therefore defined as SPL of 0 dB, but the upper limit is not as clearly defined. While 1 atm (SPL of 191 dB) is the largest pressure variation an undistorted sound wave can have in Earth's atmosphere, larger sound waves can be present in other atmospheres, or on Earth in the form of shock waves. 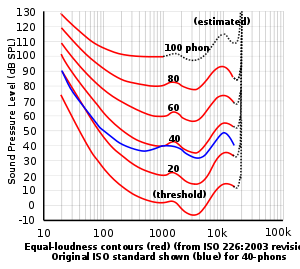 From the formula of the sound pressure level we find