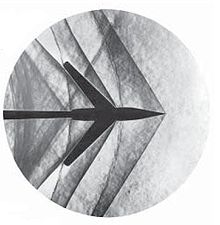 Schlieren photograph of an attached shock on a sharp-nosed supersonic body.

A shock wave (also called shock front or simply "shock") is a type of propagating disturbance. Like an ordinary wave, it carries energy and can propagate through a medium (solid, liquid, gas or plasma) or in some cases in the absence of a material medium, through a field such as the electromagnetic field. Shock waves are characterized by an abrupt, nearly discontinuous change in the characteristics of the medium.[1] Across a shock there is always an extremely rapid rise in pressure, temperature and density of the flow. In supersonic flows, expansion is achieved through an expansion fan. A shock wave travels through most media at a higher speed than an ordinary wave.

Unlike solitons (another kind of nonlinear wave), the energy of a shock wave dissipates relatively quickly with distance. Also, the accompanying expansion wave approaches and eventually merges with the shock wave, partially cancelling it out. Thus the sonic boom associated with the passage of a supersonic aircraft is the sound wave resulting from the degradation and merging of the shock wave and the expansion wave produced by the aircraft.

When a shock wave passes through matter, the total energy is preserved but the energy which can be extracted as work decreases and entropy increases. This, for example, creates additional drag force on aircraft with shocks.

Shock waves can be:

When an object (or disturbance) moves faster than the information about it can be propagated into the surrounding fluid, fluid near the disturbance cannot react or "get out of the way" before the disturbance arrives. In a shock wave the properties of the fluid (density, pressure, temperature, velocity, Mach number) change almost instantaneously. Measurements of the thickness of shock waves have resulted in values approximately one order of magnitude greater than the mean free path of the gas investigated.[citation needed]

Shock waves form when the speed of a gas changes by more than the speed of sound.[2] At the region where this occurs sound waves traveling against the flow reach a point where they cannot travel any further upstream and the pressure progressively builds in that region, and a high pressure shock wave rapidly forms.

Shock waves are not conventional sound waves; a shock wave takes the form of a very sharp change in the gas properties on the order of a few mean free paths (roughly micro-meters at atmospheric conditions) in thickness. Shock waves in air are heard as a loud "crack" or "snap" noise. Over longer distances a shock wave can change from a nonlinear wave into a linear wave, degenerating into a conventional sound wave as it heats the air and loses energy. The sound wave is heard as the familiar "thud" or "thump" of a sonic boom, commonly created by the supersonic flight of aircraft.

The shock wave is one of several different ways in which a gas in a supersonic flow can be compressed. Some other methods are isentropic compressions, including Prandtl-Meyer compressions. The method of compression of a gas results in different temperatures and densities for a given pressure ratio, which can be analytically calculated for a non-reacting gas. A shock wave compression results in a loss of total pressure, meaning that it is a less efficient method of compressing gases for some purposes, for instance in the intake of a scramjet. The appearance of pressure-drag on supersonic aircraft is mostly due to the effect of shock compression on the flow.

Due to nonlinear steepening

Shock waves can form due to steepening of ordinary waves. The best-known example of this phenomenon is ocean waves that form breakers on the shore. In shallow water, the speed of surface waves is dependent on the depth of the water. An incoming ocean wave has a slightly higher wave speed near the crest of each wave than near the troughs between waves, because the wave height is not infinitesimal compared to the depth of the water. The crests overtake the troughs until the leading edge of the wave forms a vertical face and spills over to form a turbulent shock (a breaker) that dissipates the wave's energy as sound and heat.

Similar phenomena affect strong sound waves in gas or plasma, due to the dependence of the sound speed on temperature and pressure. Strong waves heat the medium near each pressure front, due to adiabatic compression of the air itself, so that high pressure fronts outrun the corresponding pressure troughs. While shock formation by this process does not normally happen to sound waves in Earth's atmosphere, it is thought to be one mechanism by which the solar chromosphere and corona are heated, via waves that propagate up from the solar interior.

A shock wave may be described as the furthest point upstream of a moving object which "knows" about the approach of the object. In this description, the shock wave position is defined as the boundary between the zone having no information about the shock-driving event, and the zone aware of the shock-driving event, analogous with the light cone described in the theory of special relativity.

To get a shock wave something has to be travelling faster than the local speed of sound. In that case some parts of the air around the aircraft are travelling at exactly the speed of sound with the aircraft, so that the sound waves leaving the aircraft pile up on each other, similar to a tailback on a road, and a shock wave forms, the pressure increases, and then spreads out sideways. Because of this amplification effect, a shock wave is very intense, more like an explosion when heard (not coincidentally, since explosions create shock waves).

Analogous phenomena are known outside fluid mechanics. For example, particles accelerated beyond the speed of light in a refractive medium (where the speed of light is less than that in a vacuum, such as water) create visible shock effects, a phenomenon known as Cherenkov radiation.

Below are a number of examples of shock waves, broadly grouped with similar shock phenomena:

Shock wave propagating into a stationary medium, ahead of the fireball of an explosion. The shock is made visible by the shadow effect (Trinity explosion.) 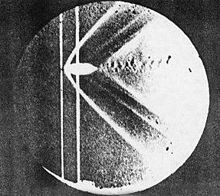 Shadowgraph of the detached shock on a bullet in supersonic flight, published by Ernst Mach in 1887. 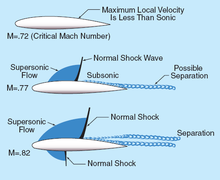 Recompression shock on a transonic flow airfoil, at and above critical Mach number.

Shock in a pipe flow

Shock waves can also occur in rapid flows of dense granular materials down inclined channels or slopes. Strong shocks in rapid dense granular flows can be studied theoretically and analyzed to compare with experimental data. Consider a configuration in which the rapidly moving material down the chute impinges on an obstruction wall erected perpendicular at the end of a long and steep channel. Impact leads to a sudden change in the flow regime from a fast moving supercritical thin layer to a stagnant thick heap. This flow configuration is particularly interesting because it is analogous to some hydraulic and aerodynamic situations associated with flow regime changes from supercritical to subcritical flows. Such study is important in estimating impact pressures exerted by avalanches and granular flows on defense structures or infrastructure along the channel and in the run-out zones, and to study the complex flow dynamics around the obstacles and in depositions when the mass comes suddenly to a standstill.[3][4]

Astrophysical environments feature many different types of shock waves. Some common examples are supernovae shock waves or blast waves traveling through the interstellar medium, the bow shock caused by the Earth's magnetic field colliding with the solar wind and shock waves caused by galaxies colliding with each other. Another interesting type of shock in astrophysics is the quasi-steady reverse shock or termination shock that terminates the ultra relativistic wind from young pulsars.