Explosion
For other meanings of "explosion", "explode" and similar, see Explosion (disambiguation). 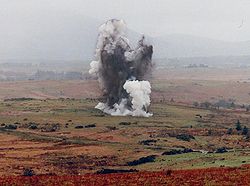 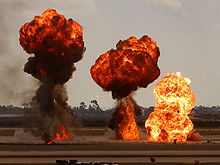 Black smoke from an explosion rising after a bomb detonation inside the outside Nahr al-Bared, Lebanon.

Detonation of a MICLIC to destroy a 1km in depth blast resistant minefield in Iraq.

An explosion is a rapid increase in volume and release of energy in an extreme manner, usually with the generation of high temperatures and the release of gases. An explosion creates a shock wave. If the shock wave is a supersonic detonation, then the source of the blast is called a "high explosive". Subsonic shock waves are created by low explosives through the slower burning process known as deflagration.

Explosions can occur in nature. Most natural explosions arise from volcanic processes of various sorts. Explosive volcanic eruptions occur when magma rising from below has much dissolved gas in it; the reduction of pressure as the magma rises causes the gas to bubble out of solution, resulting in a rapid increase in volume. Explosions also occur as a result of impact events and in phenomena such as hydrothermal explosions (also due to volcanic processes). Explosions can also occur outside of Earth in the universe in events such as supernova. Explosions frequently occur during Bushfires in Eucalyptus forests where the volatile oils in the tree tops suddenly combust.[1]

Animal bodies can also be explosive, as some animals hold a large amount of flammable material such as animal fat. This, in rare cases, results in naturally exploding animals. citation needed

Among the largest known explosions in the universe are supernovae, which result when a star explodes from the sudden starting or stopping of nuclear fusion, and gamma ray bursts, whose nature is still in some dispute. Solar flares are an example of explosion common on the Sun, and presumably on most other stars as well. The energy source for solar flare activity comes from the tangling of magnetic field lines resulting from the rotation of the Sun's conductive plasma. Another type of large astronomical explosion occurs when a very large meteoroid or an asteroid impacts the surface of another object, such as a planet.

The most common artificial explosives are chemical explosives, usually involving a rapid and violent oxidation reaction that produces large amounts of hot gas. Gunpowder was the first explosive to be discovered and put to use. Other notable early developments in chemical explosive technology were Frederick Augustus Abel's development of nitrocellulose in 1865 and Alfred Nobel's invention of dynamite in 1866. Chemical explosions (both intentional and accidental) are often initiated by an electric spark or flame. Accidental explosions may occur in fuel tanks, rocket engines, etc.

A high current electrical fault can create an electrical explosion by forming a high energy electrical arc which rapidly vaporizes metal and insulation material. This arc flash hazard is a danger to persons working on energized switchgear. Also, excessive magnetic pressure within an ultra-strong electromagnet can cause a magnetic explosion.

Strictly a physical process, as opposed to chemical or nuclear, e.g., the bursting of a sealed or partially-sealed container under internal pressure is often referred to as a 'mechanical explosion'. Examples include an overheated boiler or a simple tin can of beans tossed into a fire.

Boiling liquid expanding vapor explosions are one type of mechanical explosion that can occur when a vessel containing a pressurized liquid is ruptured, causing a rapid increase in volume as the liquid evaporates. Note that the contents of the container may cause a subsequent chemical explosion, the effects of which can be dramatically more serious, such as a propane tank in the midst of a fire. In such a case, to the effects of the mechanical explosion when the tank fails are added the effects from the explosion resulting from the released (initially liquid and then almost instantaneously gaseous) propane in the presence of an ignition source. For this reason, emergency workers often differentiate between the two events.

In addition to stellar (star) nuclear explosions, a man-made nuclear weapon is a type of explosive weapon that derives its destructive force from nuclear fission or from a combination of fission and fusion. As a result, even a nuclear weapon with a small yield is significantly more powerful than the largest conventional explosives available, with a single weapon capable of completely destroying an entire city.

The speed of the reaction is what distinguishes the explosive reaction from an ordinary combustion reaction . Unless the reaction occurs rapidly, the thermally expanded gases will be dissipated in the medium, and there will be no explosion. Again, consider a wood or coal fire. As the fire burns, there is the evolution of heat and the formation of gases, but neither is liberated rapidly enough to cause an explosion. This can be likened to the difference between the energy discharge of a battery, which is slow, and that of a flash capacitor like that in a camera flash, which releases its energy all at once.

The generation of heat in large quantities accompanies most explosive chemical reaction. The exceptions are called entropic explosives and include organic peroxides such as acetone peroxide[2] It is the rapid liberation of heat that causes the gaseous products of most explosive reactions to expand and generate high pressures. This rapid generation of high pressures of the released gas constitutes the explosion. The liberation of heat with insufficient rapidity will not cause an explosion. For example, although a pound of coal yields five times as much heat as a pound of nitroglycerin, the coal cannot be used as an explosive because the rate at which it yields this heat is quite slow.

When a chemical compound is formed from its constituents, heat may either be absorbed or released. The quantity of heat absorbed or given off during transformation is called the heat of formation. Heats of formations for solids and gases found in explosive reactions have been determined for a temperature of 15 °C and atmospheric pressure, and are normally given in units of kilocalories per gram-molecule. A negative value indicates that heat is absorbed during the formation of the compound from its elements; such a reaction is called an endothermic reaction. In explosive technology only materials that are exothermic—that have a net liberation of heat—are of interest. Reaction heat is measured under conditions either of constant pressure or constant volume. It is this heat of reaction that may be properly expressed as the "heat of explosion."

A chemical explosive is a compound or mixture which, upon the application of heat or shock, decomposes or rearranges with extreme rapidity, yielding much gas and heat. Many substances not ordinarily classed as explosives may do one, or even two, of these things.

A reaction must be capable of being initiated by the application of shock, heat, or a catalyst (in the case of some explosive chemical reactions) to a small portion of the mass of the explosive material. A material in which the first three factors exist cannot be accepted as an explosive unless the reaction can be made to occur when needed.

Fragmentation is the accumulation and projection of particles as the result of a high explosives detonation. Fragments could be part of a structure such as a magazine. High velocity, low angle fragments can travel hundreds or thousands of feet with enough energy to initiate other surrounding high explosive items, injure or kill personnel and damage vehicles or structures.