In physics, the mean free path is the average distance covered by a moving particle (such as an atom, a molecule, a photon) between successive impacts (collisions) [1] which modify its direction or energy or other particle properties.

Imagine a beam of particles being shot through a target, and consider an infinitesimally thin slab of the target (Figure 1). The atoms (or particles) that might stop a beam particle are shown in red. The magnitude of mean free path depends on the characteristics of the system the particle is in:

is the mean free path, n is the number of target particles per unit volume, and σ is the effective cross sectional area for collision.

where σ is the area (or, more formally, the "scattering cross-section") of one atom.

This is an ordinary differential equation

whose solution is known as Beer-Lambert law and has form

Thus the expectation value (or average, or simply mean) of x is

where x is equal to the thickness of the slab x = dx.

In kinetic theory the mean free path of a particle, such as a molecule, is the average distance the particle travels between collisions with other moving particles. The formula

where kB is the Boltzmann constant, T is temperature, p is pressure, and d is the diameter of the gas particles. 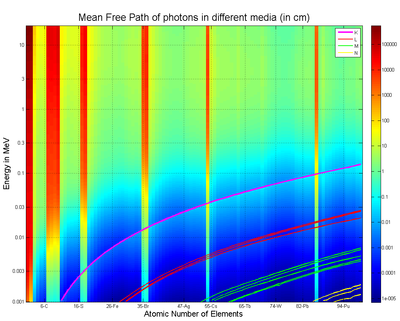 Mean free path for photons in energy range from 1 keV to 20 MeV for Elements Z = 1 to 100. Based on data from.[5] The discontinuities are due to low density of gas elements. Six bands correspond to neighborhoods of six noble gases. Also shown are locations of Compton edges.

In gamma-ray radiography the mean free path of a pencil beam of mono-energetic photons, is the average distance a photon travels between collisions with atoms of the target material. It depends on material and energy of the photons:

In X-ray radiography the calculation of mean free path is more complicated since photons are not mono-energetic, but have some distribution of energies called spectrum. As photons move through the target material they are attenuated with probabilities depending on their energy, as a result their distribution changes in process called Spectrum Hardening. Because of Spectrum Hardening mean free path of X-ray spectrum changes with distance.

In particle physics the concept of mean free path is not commonly used, replaced instead by the similar concept of attenuation length. In particular, for high-energy photons, which mostly interact by electron-positron pair production, the radiation length is used much like the mean free path in radiography.

Independent particle models in nuclear physics require the undisturbed orbiting of nucleons within the nucleus before they interact with other nucleons. Blatt and Weisskopf, in their 1952 textbook "Theoretical Nuclear Physics" (p. 778) wrote "The effective mean free path of a nucleon in nuclear matter must be somewhat larger than the nuclear dimensions in order to allow the use of the independent particle model. This requirement seems to be in contradiction to the assumptions made in the theory... We are facing here one of the fundamental problems of nuclear structure physics which has yet to be solved." (quoted by Norman D. Cook in "Models of the Atomic Nucleus" Ed.2 (2010) Springer, in Chapter 5 "The Mean Free Path of Nucleons in Nuclei").[8]

If one takes a suspension of non light absorbing particles of diameter d with a volume fraction Φ. The mean free path [9] of the photons is:

where Qs is scattering efficiency factor. Qs can be evaluated numerically for spherical particles thanks to the Mie theory calculation

In an otherwise empty cavity, the mean free path of a single particle bouncing off the walls is:

where V is volume of the cavity and S is total inside surface area of cavity. This relation is used in the derivation of the Sabine equation in acoustics, using a geometrical approximation of sound propagation.[10]

For example, for sound waves in an enclosure, the mean free path is the average distance the wave travels between reflections off the enclosure's walls.

In aerodynamics, the mean free path is in the same order of magnitude as the shockwave thickness at mach numbers greater than one.