The mass extinction coefficient should not be confused with the different definition of "extinction coefficient" used more commonly in physics, namely the imaginary part of the complex index of refraction (which is unitless). In fact, they have a straightforward but nontrivial relationship; see Mathematical descriptions of opacity.

into the substance,
e is Euler's number, about 2.718,
μ is the attenuation coefficient.

When discussing the mass attenuation coefficient, this equation is rewritten

ρ is the density, (μ / ρ) is the mass attenuation coefficient and

is the area density known also as mass thickness.

A closely related concept is molar absorptivity. They are quantitatively related by: 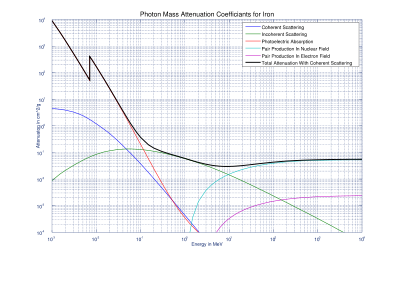 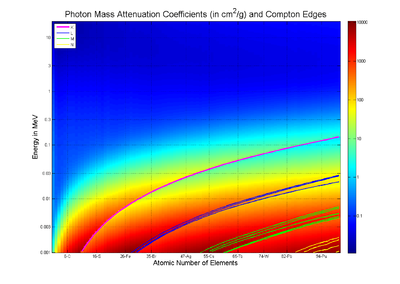 Mass Attenuation Coefficient values shown for all elements with atomic number Z smaller than 100 collected for photons with energies from 1 keV to 20 MeV. The discontinuities in the values are due to absorption edges which were also shown.

Tables of photon mass attenuation coefficients are essential in radiological physics, radiography (for medical and security purposes), dosimetry, diffraction, interferometry, crystallography and other branches of physics. The photons can be in form of x-ray, gamma-ray, and bremsstrahlung.

The values of mass attenuation coefficients are dependent upon the absorption and scattering of the incident radiation caused by several different mechanisms such as:

The actual values have been thoroughly examined and are available to the general public through three databases run by National Institute of Standards and Technology (NIST):

Calculating the composition of a solution

If several known chemicals are dissolved in a single solution, the concentrations of each can be calculated using a light absorption analysis. First, the mass attenuation coefficients of each individual solute or solvent, ideally across a broad spectrum of wavelengths, must be measured or looked up. Second, the attenuation coefficient of the actual solution must be measured. Finally, using the formula

the spectrum can be fitted using

as adjustable parameters. (Remember, μ and each (μ / ρ)i are functions of wavelength.)

If there are N solutes or solvents, this procedure requires at least N measured wavelengths to create a solvable system of simultaneous equations, although using more wavelengths gives more reliable data.

When a narrow (collimated) beam of light passes through a substance, the beam will lose intensity due to two processes: The light can be absorbed by the substance, or the light can be scattered (i.e., the photons can change direction) by the substance. Just looking at the narrow beam itself, the two processes cannot be distinguished. However, if you set up a detector to measure light leaving in different directions, or conversely try using a non-narrow beam, you can measure how much of the lost intensity was scattered, and how much was absorbed.