The density of air, ρ (Greek: rho) (air density), is the mass per unit volume of Earth's atmosphere, and is a useful value in aeronautics and other sciences. Air density decreases with increasing altitude, as does air pressure. It also changes with variances in temperature or humidity. At sea level and at 15°C according to ISA (International Standard Atmosphere), air has a density of approximately 1.275 kg/m3.

The density of dry air can be calculated using the ideal gas law, expressed as a function of temperature and pressure:

where ρ is the air density, p is absolute pressure, Rspecific is the specific gas constant for dry air, and T is absolute temperature.

The following table illustrates the air density - temperature relationship at 1 atm or 101.325 kPa:

The addition of water vapor to air (making the air humid) reduces the density of the air, which may at first appear contrary to logic.

This occurs because the molecular mass of water (18 g/mol) is less than the molecular mass of dry air (around 29 g/mol). For any gas, at a given temperature and pressure, the number of molecules present is constant for a particular volume (see Avogadro's Law). So when water molecules (vapor) are added to a given volume of air, the dry air molecules must decrease by the same number, to keep the pressure or temperature from increasing. Hence the mass per unit volume of the gas (its density) decreases.

The saturation vapor pressure of water at any given temperature is the vapor pressure when relative humidity is 100%. A simplification of the regression [1] used to find this, can be formulated as:

Where p simply notes the absolute pressure in the observed system. 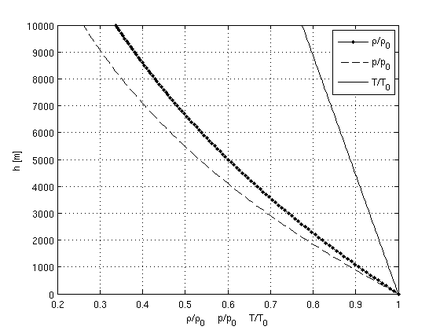 To calculate the density of air as a function of altitude, one requires additional parameters. They are listed below, along with their values according to the International Standard Atmosphere, using the universal gas constant instead of the specific one:

Temperature at altitude h meters above sea level is given by the following formula (only valid inside the troposphere):

The pressure at altitude h is given by:

Density can then be calculated according to a molar form of the original formula:

where M is molar mass, R is the ideal gas constant, and T is absolute temperature.