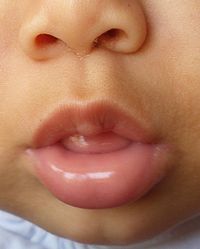 Swallowing, known scientifically as deglutition, is the process in the human or animal body that makes something pass from the mouth, to the pharynx, and into the esophagus, while shutting the epiglottis. If this fails and the object goes through the trachea, then choking or pulmonary aspiration can occur. In the human body it is controlled by the swallowing reflex.

Eating and swallowing are complex neuromuscular activities consisting essentially of three phases, an oral, pharyngeal and esophageal phase. Each phase is controlled by a different neurological mechanism. The oral phase, which is entirely voluntary, is mainly controlled by the medial temporal lobes and limbic system of the cerebral cortex with contributions from the motor cortex and other cortical areas. The pharyngeal swallow is started by the oral phase and subsequently is co-ordinated by the swallowing center in the medulla oblongata and pons. The reflex is initiated by touch receptors in the pharynx as a bolus of food is pushed to the back of the mouth by the tongue.

Swallowing is a complex mechanism using both skeletal muscle (tongue) and smooth muscles of the pharynx and esophagus. The autonomic nervous system (ANS) coordinates this process in the pharyngeal and esophageal phases. 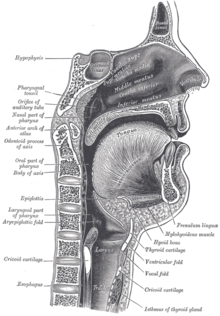 Sagittal view of mouth and pharynx

Food is moistened by saliva from the salivary glands (parasympathetic).

Food is mechanically broken down by the action of the teeth controlled by the muscles of mastication (Vc) acting on the temporomandibular joint. This results in a bolus which is moved from one side of the oral cavity to the other by the tongue. Buccinator (VII) helps to contain the food against the occlusal surfaces of the teeth. The bolus is ready for swallowing when it is held together by (largely mucus) saliva (VII—chorda tympani and IX—lesser petrosal), sensed by the lingual nerve of the tongue (Vc). Any food that is too dry to form a bolus will not be swallowed.

4) Movement of the bolus posteriorly

The food bolus is moved (by the muscles in the back of the tongue) along the palate and into the esophagaeal passage. Mylohyoid (Vc) lifts the tongue and styloglossus (XII) pulls it back. The palatoglossal arches are opened by relaxation of palatoglossus (pharyngeal plexus—IX, X). Once the bolus reaches the palatoglossal arch and the oropharynx, the pharyngeal phase, which is reflex and involuntary, then begins. Receptors initiating this reflex are proprioceptive (afferent limb of reflex is IX and efferent limb is the pharyngeal plexus- IX and X). They are scattered over the base of the tongue, the palatoglossal and palatopharyngeal arches, the tonsillar fossa, uvula and posterior pharyngeal wall. Stimuli from the receptors of this phase then provoke the pharyngeal phase. In fact, it has been shown that the swallowing reflex can be initiated entirely by peripheral stimulation of the internal branch of the superior laryngeal nerve. This phase is voluntary and involves important cranial nerves: V (trigeminal), VII (facial) and XII (hypoglossal).

5) Closure of the nasopharynx

6) The pharynx prepares to receive the bolus

7) Opening of the auditory tube

8) Closure of the oropharynx

The oropharynx is kept closed by palatoglossus (pharyngeal plexus—IX, X), the intrinsic muscles of tongue (XII) and styloglossus (XII).

It is true vocal fold closure that is the primary laryngopharyngeal protective mechanism to prevent aspiration during swallowing. The adduction of the vocal cords are effected by the contraction of the lateral cricoarytenoids and the oblique and transverse arytenoids (all recurrent laryngeal nerve of vagus). Since the true vocal folds adduct during the swallow, a finite period of apnea must necessarily take place with each swallow. When relating swallowing to respiration, it has been demonstrated that swallowing occurs most often during expiration. The clinical significance of this finding is that patients with a baseline of compromised lung function will, over a period of time, develop respiratory distress as a meal progresses. Subsequently, false vocal fold adduction, adduction of the aryepiglottic folds and retroversion of the epiglottis take place. The aryepiglotticus (recurrent laryngeal nerve of vagus) contracts, causing the arytenoids to appose each other (closes the laryngeal aditus by bringing the aryepiglottic folds together), and draws the epiglottis down to bring its lower half into contact with arytenoids, thus closing the aditus. Retroversion of the epiglottis, while not the primary mechanism of protecting the airway from laryngeal penetration and aspiration, acts to anatomically direct the food bolus laterally towards the piriform fossa. Additionally, the larynx is pulled up with the pharynx under the tongue by stylopharyngeus (IX), salpingopharyngeus (pharyngeal plexus—IX, X), palatopharyngeus (pharyngeal plexus—IX, X) and inferior constrictor (pharyngeal plexus—IX, X).This phase is passively controlled reflexively and involves cranial nerves V, X (vagus), XI (accessory) and XII (hypoglossal). The respiratory center of the medulla is directly inhibited by the swallowing center for the very brief time that it takes to swallow. This means that it is briefly impossible to breathe during this phase of swallowing and the moment where breathing is prevented is known as deglutition apnea.

The hyoid is elevated by digastric (V & VII) and stylohyoid (VII), lifting the pharynx and larynx up even further.

The bolus moves down towards the esophagus by pharyngeal peristalsis which takes place by sequential contraction of the superior, middle and inferior pharyngeal constrictor muscles (pharyngeal plexus—IX, X). The lower part of the inferior constrictor (cricopharyngeus) is normally closed and only opens for the advancing bolus. Gravity plays only a small part in the upright position—in fact, it is possible to swallow solid food even when standing on one’s head. The velocity through the pharynx depends on a number of factors such as viscosity and volume of the bolus. In one study, bolus velocity in healthy adults was measured to be approximately 30-40 cm/s.[1]

Like the pharyngeal phase of swallowing, the esophageal phase of swallowing is under involuntary neuromuscular control. However, propagation of the food bolus is significantly slower than in the pharynx. The bolus enters the esophagus and is propelled downwards first by striated muscle (recurrent laryngeal, X) then by the smooth muscle (X) at a rate of 3 – 5 cm/sec. The upper esophageal sphincter relaxes to let food pass, after which various striated constrictor muscles of the pharynx as well as peristalsis and relaxation of the lower esophageal sphincter sequentially push the bolus of food through the esophagus into the stomach.

Finally the larynx and pharynx move down with the hyoid mostly by elastic recoil. Then the larynx and pharynx move down from the hyoid to their relaxed positions by elastic recoil. Swallowing therefore depends on coordinated interplay between many various muscles, and although the initial part of swallowing is under voluntary control, once the deglutition process is started, it is quite hard to stop it.

Swallowing becomes a great concern for the elderly since strokes and Alzheimer's disease can interfere with the autonomic nervous system. Speech therapy is commonly used to correct this condition since the speech process uses the same neuromuscular structures as swallowing. In terminally ill patients, a failure of the reflex to swallow leads to a build-up of mucus or saliva in the throat and airways, producing a noise known as a death rattle, or agonal respiration. 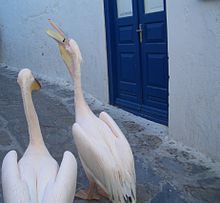 In many birds, the esophagus is largely merely a gravity chute, and in such events as a seagull swallowing a fish or a stork swallowing a frog, swallowing consists largely of the bird lifting its head with its beak pointing up and guiding the prey with tongue and jaws so that the prey slides inside and down.

In fish, the tongue is largely bony and much less mobile and getting the food to the back of the pharynx is helped by pumping water in its mouth and out of its gills.

In snakes, the work of swallowing is done by raking with the lower jaw until the prey is far enough back to be helped down by body undulations.