A gastric chief cell (or peptic cell, or gastric zymogenic cell) is a cell in the stomach that releases pepsinogen, gastric lipase and Chymosin. The cell stains basophilic upon H&E prep due to the large proportion of rough endoplasmic reticulum in its cytoplasm.

Chief cells release the zymogen (enzyme precursor) pepsinogen when stimulated by a variety of factors including cholinergic activity from the vagus nerve and acidic condition in the stomach. Gastrin and secretin may also act as secretagogues. [1]

It works in conjunction with the parietal cell, which releases gastric acid, converting the pepsinogen into pepsin.

The terms "chief cell" and "zymogenic cell" are often used without the word "gastric" to name this type of cell. However those terms can also be used to describe other cell types (for example, parathyroid chief cells.) Chief cells are also known as peptic cells. 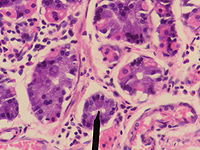