In Greek mythology, the Anemoi (in Greek, Ἄνεμοι — "winds") were Greek wind gods who were each ascribed a cardinal direction from which their respective winds came (see Classical compass winds), and were each associated with various seasons and weather conditions. They were sometimes represented as mere gusts of wind, at other times were personified as winged men, and at still other times were depicted as horses kept in the stables of the storm god Aeolus, who provided Odysseus with the Anemoi in the Odyssey. Astraeus, the astrological deity sometimes associated with Aeolus, and Eos, the goddess of the dawn, were the parents of the Anemoi, according to the Greek poet Hesiod.

Of the four chief Anemoi, Boreas (Aquilon in Latin) was the north wind and bringer of cold winter air, Notus was the south wind and bringer of the storms of late summer and autumn, and Zephyrus was the west wind and bringer of light spring and early summer breezes; Eurus, the east wind, was not associated with any of the three Greek seasons, and is the only one of these four Anemoi not mentioned in Hesiod's Theogony or in the Orphic Hymns. Additionally, four lesser Anemoi were sometimes referenced, representing the northeast, southeast, northwest, and southwest winds.

The deities equivalent to the Anemoi in Roman mythology were the Venti (in Latin, "winds"). These gods had different names, but were otherwise very similar to their Greek counterparts, borrowing their attributes and being frequently conflated with them. 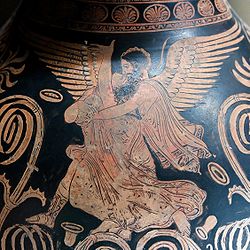 Rape of Oreithyia by Boreas. Detail from an Apulian red-figure oinochoe, 360 BC

Boreas (Greek: Βορέας, Boréas) was the Greek god of the cold north wind and the bringer of winter. His name meant "North Wind" or "Devouring One". Boreas is depicted as being very strong, with a violent temper to match. He was frequently shown as a winged old man with shaggy hair and beard, holding a conch shell and wearing a billowing cloak.[1] Pausanias wrote that Boreas had snakes instead of feet, though in art he was usually depicted with winged human feet.

Boreas was closely associated with horses. He was said to have fathered twelve colts after taking the form of a stallion, to the mares of Erichthonius, king of Troy. These were said to be able to run across a field of grain without trampling the plants. Pliny (Natural History iv.35 and viii.67) thought that mares might stand with their hindquarters to the North Wind, and bear foals without a stallion. The Greeks believed that his home was in Thrace, and Herodotus and Pliny both describe a northern land known as Hyperborea ("Beyond the North Wind"), where people lived in complete happiness and had extraordinarily long lifespans.

Boreas was also said to have kidnapped Oreithyia, an Athenian princess, from the river Ilissus. Boreas had taken a fancy to Oreithyia, and had initially pleaded for her favours, hoping to persuade her. When this failed, he reverted to his usual temper and abducted her as she danced on the banks of the Ilissus. Boreas wrapped Oreithyia up in a cloud, raped her, and with her, Boreas fathered two sons—the Boreads, Zethes and Calais—and two daughters— Khione, goddess of snow, and Cleopatra. 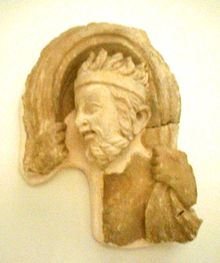 Tower of the Winds in ancient Athens, part of the frieze depicting the Greek wind gods Boreas (north wind, on the left) and Skiron (northwesterly wind, on the right)

From then on, the Athenians saw Boreas as a relative by marriage. When Athens was threatened by Xerxes, the people prayed to Boreas, who was said to have then caused winds to sink 400 Persian ships. A similar event had occurred twelve years earlier, and Herodotus writes:

Now I cannot say if this was really why the Persians were caught at anchor by the stormwind, but the Athenians are quite positive that, just as Boreas helped them before, so Boreas was responsible for what happened on this occasion also. And when they went home they built the god a shrine by the River Illisus.

The abduction of Oreithyia was popular in Athens before and after the Persian War, and was frequently depicted on vase paintings. In these paintings, Boreas was portrayed as a bearded man in a tunic, with shaggy hair that is sometimes frosted and spiked. The abduction was also dramatized in Aeschylus's lost play Oreithyia.

In late accounts, Boreas was the father of Lycurgus (by another woman) and the lover of the nymph Pitys.

The Roman equivalent of Boreas was Aquilo, or Aquilon. An alternate, rarer name used for the northern wind was Septentrio, a word derived from septem triones ("seven oxen") referring to the seven prominent stars in the northern constellation Ursa Major. Septentrio is also the source of the obscure word septentrional, a synonym for boreal meaning "northern". 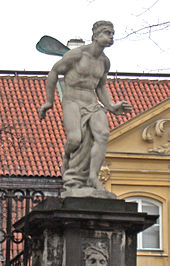 Notus, a Rococo sculpture, Palace of the Four Winds in Warsaw.

Notus (Greek Νότος, Nótos) was the Greek god of the south wind. He was associated with the desiccating hot wind of the rise of Sirius after midsummer, was thought to bring the storms of late summer and autumn, and was feared as a destroyer of crops.

Notus' equivalent in Roman mythology was Auster, the embodiment of the sirocco wind, who brought heavy cloud cover and fog or humidity.

(Auster is also the name of a defunct British aircraft manufacturer from the 1940s–1950s.)

Eurus (Greek: Εύρος, Eúros) was the Greek deity representing the unlucky east wind. He was thought to bring warmth and rain, and his symbol was an inverted vase, spilling water. His Roman counterpart was Vulturnus (not to be confused with Volturnus, a tribal river-god who later became a Roman deity of the River Tiber). 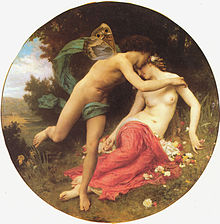 Zephyrus, the Greek god of the west wind and the goddess Chloris, from an 1875 engraving by William-Adolphe Bouguereau 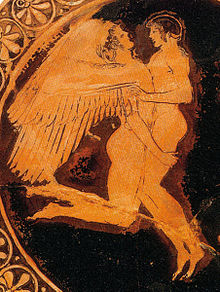 Zephyrus, or just Zephyr (Greek: Ζέφυρος, Zéphuros, "the west wind"), in Latin Favonius, is the Greek god of the west wind. The gentlest of the winds, Zephyrus is known as the fructifying wind, the messenger of spring. It was thought that Zephyrus lived in a cave in Thrace.

Zephyrus was reported as having several wives in different stories. He was said to be the husband of his sister Iris, the goddess of the rainbow. He abducted another of his sisters, the goddess Chloris, and gave her the domain of flowers. With Chloris, he fathered Carpus ("fruit"). He is said to have vied for Chloris's love with his brother Boreas, eventually winning her devotion. Additionally, with yet another sister and lover, the harpy Podarge (also known as Celaeno), Zephyrus was said to be the father of Balius and Xanthus, Achilles' horses.

One of the surviving myths in which Zephyrus features most prominently is that of Hyacinth. Hyacinth was a very handsome and athletic Spartan prince. Zephyrus fell in love with him and courted him, and so did Apollo. The two competed for the boy's love, but he chose Apollo, driving Zephyrus mad with jealousy. Later, catching Apollo and Hyacinth throwing a discus, Zephyrus blew a gust of wind at them, striking the boy in the head with the falling discus. When Hyacinth died, Apollo created the hyacinth flower from his blood.[2]

In the story of Cupid and Psyche, Zephyrus served Cupid by transporting Psyche to his cave.

Zephyrus' Roman equivalent was Favonius, who held dominion over plants and flowers. The name Favonius, which meant "favorable", was also a common Roman name.

Four lesser wind deities appear in a few ancient sources, such as at the Tower of the Winds in Athens. Originally, as attested in Hesiod and Homer, these four minor Anemoi were the Anemoi Thuellai (Άνεμοι θύελλαι; Greek: "Tempest-Winds"), wicked and violent daemons (spirits) created by the monster Typhon, and male counterparts to the harpies, who were also called thuellai. These were the winds held in Aeolus's stables; the other four, "heavenly" Anemoi were not kept locked up. However, later writers confused and conflated the two groups of Anemoi, and the distinction was largely forgotten.

Kaikias was the Greek deity of the northeast wind. He is shown as a bearded man with a shield full of hail-stones, and his name is cognate to the Latin word caecus "blind", that is, he was seen as a "dark" wind. The Roman spelling of Kaikias was Caecius.

Apeliotes, sometimes known to the Romans as Apeliotus, was the Greek deity of the southeast wind. As this wind was thought to cause a refreshing rain particularly beneficial to farmers, he is often depicted wearing gumboots and carrying fruit, draped in a light cloth concealing some flowers or grain. He is cleanshaven, with curly hair and a friendly expression. Because Apeliotes was a minor god, he was often synthesized with Eurus, the east wind. Subsolanus, Apeliotes' Roman counterpart, was also sometimes considered the east wind, in Vulturnus' place.

Skiron, or Skeiron, was the Greek god of the northwest wind. His name is related to Skirophorion, the last of the three months of spring in the Attic festival calendar. He is depicted as a bearded man tilting a cauldron, representing the onset of winter. His Roman counterpart is Caurus, or Corus. Corus was also one of the oldest Roman wind-deities, and numbered among the di indigetes ("indigenous gods"), a group of abstract and largely minor numinous entities.

Lips was the Greek deity of the southwest wind, often depicted holding the stern of a ship. His Roman equivalent was Afer ventus ("African wind"), or Africus, due to Africa being to the southwest of Italy. This name is thought to be derived from the name of a North African tribe, the Afri.