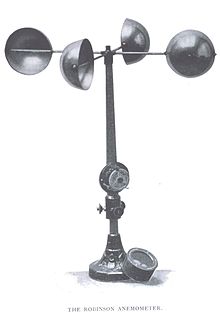 An anemometer is a device for measuring wind speed, and is a common weather station instrument. The term is derived from the Greek word anemos, meaning wind, and is used to describe any airspeed measurement instrument used in meteorology or aerodynamics. The first known description of an anemometer was given by Leon Battista Alberti around 1450.[1]

A simple type of anemometer, invented (1846) by Dr. John Thomas Romney Robinson, of Armagh Observatory. It consisted of four hemispherical cups each mounted on one end of four horizontal arms, which in turn were mounted at equal angles to each other on a vertical shaft. The air flow past the cups in any horizontal direction turned the cups in a manner that was proportional to the wind speed. Therefore, counting the turns of the cups over a set time period produced the average wind speed for a wide range of speeds. On an anemometer with four cups it is easy to see that since the cups are arranged symmetrically on the end of the arms, the wind always has the hollow of one cup presented to it and is blowing on the back of the cup on the opposite end of the cross.

When Robinson first designed his anemometer, he asserted that the cups moved one-third of the speed of the wind, unaffected by the cup size or arm length. This was apparently confirmed by some early independent experiments, but it was incorrect. Instead, the ratio of the speed of the wind and that of the cups, the anemometer factor, depends on the dimensions of the cups and arms, and may have a value between two and a little over three. Every experiment involving an anemometer had to be repeated.

The three cup anemometer developed by the Canadian John Patterson in 1926 and subsequent cup improvements by Brevoort & Joiner of the USA in 1935 led to a cupwheel design which was linear and had an error of less than 3% up to 60 mph (97 km/h). Patterson found that each cup produced maximum torque when it was at 45 degrees to the wind flow. The three cup anemometer also had a more constant torque and responded more quickly to gusts than the four cup anemometer.

The three cup anemometer was further modified by the Australian Derek Weston in 1991 to measure both wind direction and wind speed. Weston added a tag to one cup, which causes the cupwheel speed to increase and decrease as the tag moves alternately with and against the wind. Wind direction is calculated from these cyclical changes in cupwheel speed, while wind speed is as usual determined from the average cupwheel speed.

A windmill style of anemometer

The other forms of mechanical velocity anemometer may be described as belonging to the windmill type or propeller anemometer. In the Robinson anemometer the axis of rotation is vertical, but with this subdivision the axis of rotation must be parallel to the direction of the wind and therefore horizontal. Furthermore, since the wind varies in direction and the axis has to follow its changes, a wind vane or some other contrivance to fulfill the same purpose must be employed. An aerovane combines a propeller and a tail on the same axis to obtain accurate and precise wind speed and direction measurements from the same instrument. In cases where the direction of the air motion is always the same, as in the ventilating shafts of mines and buildings for instance, wind vanes, known as air meters are employed, and give most satisfactory results.

Hot wire anemometers use a very fine wire (on the order of several micrometres) electrically heated up to some temperature above the ambient. Air flowing past the wire has a cooling effect on the wire. As the electrical resistance of most metals is dependent upon the temperature of the metal (tungsten is a popular choice for hot-wires), a relationship can be obtained between the resistance of the wire and the flow speed.[2]

Several ways of implementing this exist, and hot-wire devices can be further classified as CCA (Constant-Current Anemometer), CVA (Constant-Voltage Anemometer) and CTA (Constant-Temperature Anemometer). The voltage output from these anemometers is thus the result of some sort of circuit within the device trying to maintain the specific variable (current, voltage or temperature) constant.

Additionally, PWM (pulse-width modulation) anemometers are also used, wherein the velocity is inferred by the time length of a repeating pulse of current that brings the wire up to a specified resistance and then stops until a threshold "floor" is reached, at which time the pulse is sent again.

Hot-wire anemometers, while extremely delicate, have extremely high frequency-response and fine spatial resolution compared to other measurement methods, and as such are almost universally employed for the detailed study of turbulent flows, or any flow in which rapid velocity fluctuations are of interest.

Drawing of a laser anemometer. The laser is emitted (1) through the front lens (6) of the anemometer and is backscattered off the air molecules (7). The backscattered radiation (dots) re-enter the device and are reflected and directed into a detector (12).

Laser Doppler anemometers use a beam of light from a laser that is divided into two beams, with one propagated out of the anemometer. Particulates (or deliberately introduced seed material) flowing along with air molecules near where the beam exits reflect, or backscatter, the light back into a detector, where it is measured relative to the original laser beam. When the particles are in great motion, they produce a Doppler shift for measuring wind speed in the laser light, which is used to calculate the speed of the particles, and therefore the air around the anemometer.[3]

Sonic anemometers, first developed in the 1970s, use ultrasonic sound waves to measure wind velocity. They measure wind speed based on the time of flight of sonic pulses between pairs of transducers. Measurements from pairs of transducers can be combined to yield a measurement of velocity in 1-, 2-, or 3-dimensional flow. The spatial resolution is given by the path length between transducers, which is typically 10 to 20 cm. Sonic anemometers can take measurements with very fine temporal resolution, 20 Hz or better, which makes them well suited for turbulence measurements. The lack of moving parts makes them appropriate for long term use in exposed automated weather stations and weather buoys where the accuracy and reliability of traditional cup-and-vane anemometers is adversely affected by salty air or large amounts of dust. Their main disadvantage is the distortion of the flow itself by the structure supporting the transducers, which requires a correction based upon wind tunnel measurements to minimize the effect. An international standard for this process, ISO 16622 Meteorology—Sonic anemometers/thermometers—Acceptance test methods for mean wind measurements is in general circulation. Another disadvantage is lower accuracy due to precipitation, where rain drops may vary the speed of sound.

Since the speed of sound varies with temperature, and is virtually stable with pressure change, sonic anomometers are also used as thermometers.

A common anemometer for basic use is constructed from a ping-pong ball attached to a string. When the wind blows horizontally, it presses on and moves the ball; because ping-pong balls are very lightweight, they move easily in light winds. Measuring the angle between the string-ball apparatus and the vertical gives an estimate of the wind speed.

This type of anemometer is mostly used for middle-school level instruction which most students make themselves, but a similar device was also flown on Phoenix Mars Lander[citation needed] .

The first designs of anemometers which measure the pressure were divided into plate and tube classes.

These are the earliest anemometers and are simply a flat plate suspended from the top so that the wind deflects the plate. In 1450, the Italian art architect Leon Battista Alberti invented the first mechanical anemometer; in 1664 it was re-invented by Robert Hooke (who is often mistakenly considered the inventor of the first anemometer). Later versions of this form consisted of a flat plate, either square or circular, which is kept normal to the wind by a wind vane. The pressure of the wind on its face is balanced by a spring. The compression of the spring determines the actual force which the wind is exerting on the plate, and this is either read off on a suitable gauge, or on a recorder. Instruments of this kind do not respond to light winds, are inaccurate for high wind readings, and are slow at responding to variable winds. Plate anemometers have been used to trigger high wind alarms on bridges.They are used on these high places because they are in a plate shape; has a good measurment status on higher altitudes. 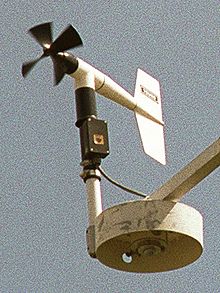 James Lind's anemometer of 1775 consisted simply of a glass U tube containing a liquid manometer (pressure gauge), with one end bent in a horizontal direction to face the wind and the other vertical end remains parallel to the wind flow. Though the Lind was not the first it was the most practical and best known anemometer of this type. If the wind blows into the mouth of a tube it causes an increase of pressure on one side of the manometer. The wind over the open end of a vertical tube causes little change in pressure on the other side of the manometer. The resulting liquid change in the U tube is an indication of the wind speed. Small departures from the true direction of the wind causes large variations in the magnitude.

The highly successful metal pressure tube anemometer of William Henry Dines in 1892 utilized the same pressure difference between the open mouth of a straight tube facing the wind and a ring of small holes in a vertical tube which is closed at the upper end. Both are mounted at the same height. The pressure differences on which the action depends are very small, and special means are required to register them. The recorder consists of a float in a sealed chamber partially filled with water. The pipe from the straight tube is connected to the top of the sealed chamber and the pipe from the small tubes is directed into the bottom inside the float. Since the pressure difference determines the vertical position of the float this is a measured of the wind speed.

The great advantage of the tube anemometer lies in the fact that the exposed part can be mounted on a high pole, and requires no oiling or attention for years; and the registering part can be placed in any convenient position. Two connecting tubes are required. It might appear at first sight as though one connection would serve, but the differences in pressure on which these instruments depend are so minute, that the pressure of the air in the room where the recording part is placed has to be considered. Thus if the instrument depends on the pressure or suction effect alone, and this pressure or suction is measured against the air pressure in an ordinary room, in which the doors and windows are carefully closed and a newspaper is then burnt up the chimney, an effect may be produced equal to a wind of 10 mi/h (16 km/h); and the opening of a window in rough weather, or the opening of a door, may entirely alter the registration.

While the Dines anemometer had an error of only 1% at 10 mph (16 km/h) it did not respond very well to low winds due to the poor response of the flat plate vane required to turn the head into the wind. In 1918 an aerodynamic vane with eight times the torque of the flat plate overcame this problem.

Effect of density on measurements

In the tube anemometer the pressure is measured, although the scale is usually graduated as a velocity scale. In cases where the density of the air is significantly different from the calibration value (as on a high mountain, or with an exceptionally low barometer) an allowance must be made. Approximately 1½% should be added to the velocity recorded by a tube anemometer for each 1000 ft (5% for each kilometer) above sea-level.