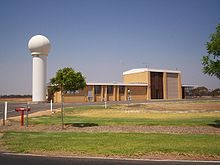 A weather station is a facility, either on land or sea, with instruments and equipment for observing atmospheric conditions to provide information for weather forecasts and to study the weather and climate. The measurements taken include temperature, barometric pressure, humidity, wind speed, wind direction, and precipitation amounts. Wind measurements are taken as free of other obstructions as possible, while temperature and humidity measurements are kept free from direct solar radiation, or insolation. Manual observations are taken at least once daily, while automated observations are taken at least once an hour. Weather conditions out at sea are taken by ships and buoys, which measure slightly different meteorological quantities such as sea surface temperature, wave height, and wave period. Drifting weather buoys outnumber their moored versions by a significant amount.

In addition, at certain Automated airport weather stations, additional instruments may be employed, including:

Except for those instruments requiring direct exposure to the elements (anemometer, rain gauge), the instruments should be sheltered in a vented box, usually a Stevenson screen, to keep direct sunlight off the thermometer and wind off the hygrometer. The instrumentation may be specialized to allow for periodic recording otherwise significant manual labour is required for record keeping. Automatic transmission of data, in a format such as METAR, is also desirable as many weather station's data is required for weather forecasting. 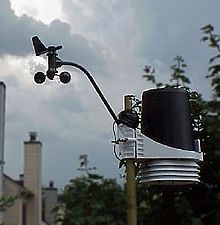 A personal weather station is a set of weather measuring instruments operated by a private individual, club, association, or even business (where obtaining and distributing weather data is not a part of the entity's business operation). The quality and number of instruments can vary widely, and placement of the instruments, so important to obtaining accurate, meaningful, and comparable data, can also be very variable.

Today's personal weather stations also typically involve a digital console that provides readouts of the data being collected. These consoles may interface to a personal computer where data can be displayed, stored, and uploaded to Web sites or data ingestion/distribution systems.

Personal weather stations may be operated solely for the enjoyment and education of the owner, but many personal weather station operators also share their data with others, either by manually compiling data and distributing it, or through use of the Internet or amateur radio. The Citizen Weather Observer Program (CWOP) is one such, and the data submitted through use of software, a personal computer, and internet connection (or amateur radio) are utilized by the National Weather Service when generating forecast models, and by many other entities as well. Each weather station submitting data to CWOP will also have an individual Web page that depicts the data submitted by that station. The Weather Underground Internet site is another popular destination for the submittal and sharing of data with others around the world. As with CWOP, each station submitting data to The Weather Underground has a unique Web page displaying their submitted data. 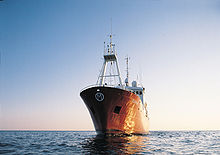 A weather ship was a ship stationed in the ocean as a platform for surface and upper air meteorological observations for use in weather forecasting. It was also meant to aid in search and rescue operations and to support transatlantic flights.[1][2] The establishment of weather ships proved to be so useful during World War II that the International Civil Aviation Organization (ICAO) established a global network of 13 weather ships in 1948.[1] Of the 12 left in operation in 1996, nine were located in the northern Atlantic ocean while three were located in the northern Pacific ocean. The agreement of the weather ships ended in 1990. Weather ship observations proved to be helpful in wind and wave studies, as they did not avoid weather systems like merchant ships tended to and were considered a valuable resource.[3] The last weather ship was MS Polarfront, known as weather station M ("Mike") at 66°N, 02°E, run by the Norwegian Meteorological Institute. MS Polarfront was removed from service January 1, 2010. Since the 1960s this role has been largely superseded by satellites, long range aircraft and weather buoys. Weather observations from ships continue from a fleet of voluntary merchant vessels in routine commercial operation. 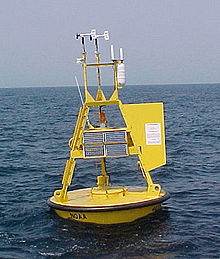 Weather buoys are instruments which collect weather and ocean data within the worlds oceans. Moored buoys have been in use since 1951,[4] while drifting buoys have been used since the late 1970s.[5] Moored buoys are connected with the ocean bottom using either chains, nylon, or buoyant polypropylene.[6] With the decline of the weather ship, they have taken a more primary role in measuring conditions over the open seas since the 1970s.[7] During the 1980s and 1990s, a network of buoys in the central and eastern tropical Pacific ocean helped study the El Niño-Southern Oscillation.[8] Moored weather buoys range from 1.5 metres (4.9 ft) to 12 metres (39 ft) in diameter,[6] while drifting buoys are smaller, with diameters of 30 centimetres (12 in) to 40 centimetres (16 in).[9] Drifting buoys are the dominant form of weather buoy in sheer number, with 1250 located worldwide.[5] Wind data from buoys has smaller error than that from ships.[10] There are differences in the values of sea surface temperature measurements between the two platforms as well, relating to the depth of the measurement and whether or not the water is heated by the ship which measures the quantity.[11]

A variety of land-based weather station networks have been set up globally. Some of these are basic to analyzing weather fronts and pressure systems, such as the synoptic observation network, while others are more regional in nature.