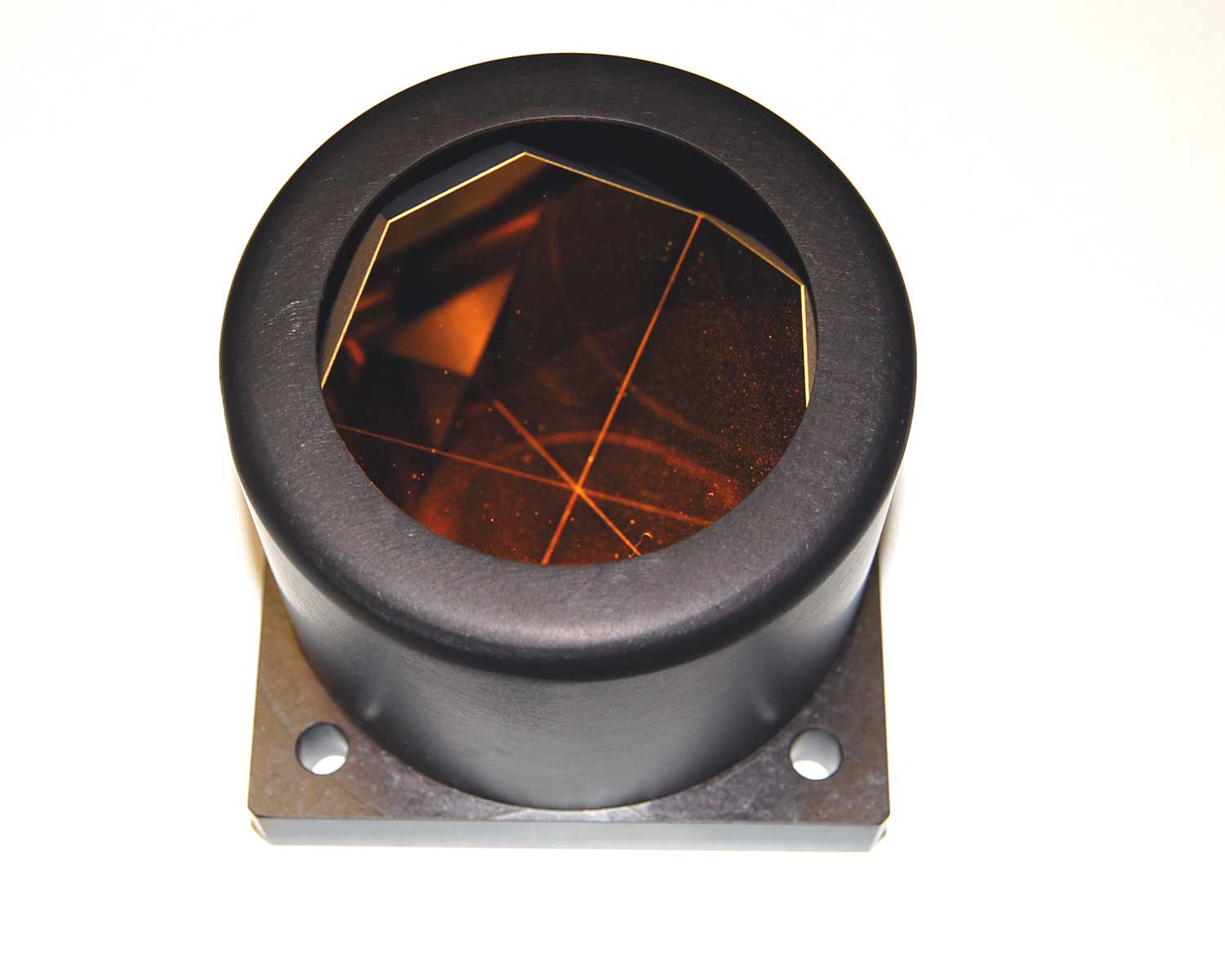 caption = A gold corner cube retroreflector
acronym =
other_names =
uses = Distance measurement by optical delay line
inventor =
manufacturer =
model =
related = A retroreflector (sometimes called a retroflector) is a device or surface that reflects light back to its source with a minimum scattering of light. An electromagnetic is reflected back along a that is to but in from the wave's source. The device or surface's is greater than zero. This is unlike a planar , which does so only if the mirror is exactly perpendicular to the wave front, having a zero angle of incidence.

Retro reflection is usually obtained in the following ways:
*with a set of three mutually perpendicular mirrors that form a corner (a or "corner cube")
*with reflecting and refracting optical elements arranged so that the focal surface of the refractive element coincides with the reflective surface, typically a transparent sphere and a spherical mirror. This same effect can be achieved with a single transparent sphere provided that the of the material is exactly two times the refractive index of the medium from which the radiation is incident. In that case, the sphere surface behaves as a concave spherical mirror with the required curvature for retroreflection. This is conventionally known as a "cat's eye" retroreflector in either configuration.

The term "cat's eye" derives from the resemblance of the cat's eye retroreflector to the optical system that produces the well-known phenomenon of "glowing eyes" or eyeshine in cats and other vertebrates (which are only reflecting light, rather than actually glowing). The combination of the eye's lens and the form the refractive converging system, while the behind the forms the spherical concave mirror. Because the function of the eye is to form an image on the retina, an eye focused on a distant object has a focal surface that approximately follows the reflective structure,Fact|date=June 2008 which is the condition required to form a good retroreflection.

Corner retroreflectors occur in two varieties. In the more common form, the corner is literally the truncated corner of a cube of transparent material such as conventional optical glass. In this structure, the reflection is achieved either by or silvering of the outer cube surfaces. The second form uses mutually perpendicular flat mirrors bracketing an air space. These two types have similar optical properties.

A retroreflector can consist of many small versions of these structures incorporated in a thin sheet or in paint. In the case of paint containing glass beads, the paint glues the beads to the surface where retroreflection is required and the beads protrude, their diameter being about twice the thickness of the paint.

A third, much less common way of producing a retroreflector is to use the nonlinear optical phenomenon of phase conjugation. This technique is used in advanced optical systems such as high-power s and optical transmission lines. Phase conjugate mirrors require a comparatively expensive and complex apparatus, as well as large quantities of power (as nonlinear optical processes can be efficient only at high enough intensities). However, phase conjugate mirrors have an inherently much greater accuracy in the direction of the retroreflection, which in passive elements is limited by the mechanical accuracy of the construction.

Retroreflectors are devices that operate by returning light back to the light source along the same light direction. The coefficient of luminous intensity, "RI", is the measure of a reflector performance, which is defined as the ratio of the strength of the reflected light (luminous intensity) to the amount of light that falls on the reflector (normal illuminance). A reflector will appear brighter as its RI value increases.

Retroreflection (sometimes called retroflection) is used on surfaces, s, s, and (large parts of the surface of special safety clothing, less on regular coats). When the headlights of a car illuminate a retroreflective surface, the reflected light is directed towards the car and its driver (rather than in all directions as with diffuse reflection). However, a can see retroreflective surfaces in the dark only if there is a light source directly between them and the reflector (e.g., via a flashlight they carry) or directly behind them (e.g., via a car approaching from behind). "Cat's eyes" are a particular type of retroreflector embedded in the road surface and are used mostly in the UK and parts of the .

Retroreflectors can be embedded in the road (level with the road surface), or they can be raised above the road surface. Raised reflectors are visible for very long distances (typically 0.5-1 or more), while sunken reflectors are visible only at very close ranges due to the higher angle required to properly reflect the light. Raised reflectors are generally not used in areas that regularly experience snow during winter, as passing s can tear them off of the roadways. Stress on roadways caused by cars running over embedded objects also contributes to accelerated wear and formation.

Retroreflective road paint is thus very popular in and increasingly the northern parts of the United States, as it is not affected by the passage of snowplows and does not affect the interior of the roadway. Where weather permits, embedded retroreflectors are preferred as they last much longer than road paint, which is weathered by the elements and ground away by the passage of vehicles.

Retroreflectors on the Moon

s on the "", "14", and "15" missions left retro-reflectors on the as part of the . They are considered to be conclusive pieces of evidence against a Moon landing hoax. Additionally the unmanned Soviet "" and "" rovers carried smaller arrays. Reflected signals were initially received from "Lunokhod 1", but no return signals have been detected since 1971, at least in part due to some uncertainty in its location on the Moon. "Lunokhod 2's" array continues to return signals to Earth. [http://ilrs.gsfc.nasa.gov/docs/williams_lw13.pdf] Even under good viewing conditions, only a single reflected photon is received every few seconds. This makes the job of filtering laser-generated photons from naturally-occurring photons challenging. [http://sunearth.gsfc.nasa.gov/eclipse/SEhelp/ApolloLaser.html]

, or Laser Geodynamics Satellites, are a series of scientific research satellites designed to provide an orbiting laser ranging benchmark for geodynamical studies of the Earth. There are two LAGEOS spacecraft: LAGEOS-1 (launched in 1976), and LAGEOS-2 (launched in 1992). They use cube-corner retroreflectors made of fused silica glass. As of 2004, both LAGEOS spacecraft are still in service.

Retroreflective clothing, combined with a properly set up camera and projector, can be used to achieve the effect of partial when viewed from a single direction. [ [http://news.bbc.co.uk/2/hi/technology/3791795.stm BBC NEWS | Technology | Inventor plans 'invisible walls' ] ] [http://www.bbcworld.com/content/clickonline_archive_33_2004.asp?pageid=666&co_pageid=3] is a retroreflective material with potential for use in this application.

Modulated retroreflectors, in which the reflectance is changed over time by some means, are the subject of research and development for free-space optical communications networks. The basic concept of such systems is that a low-power remote system, such as a sensor mote, can receive an optical signal from a base station and reflect the modulated signal back to the base station. Since the base station supplies the optical power, this allows the remote system to communicate without excessive power consumption. Modulated retroreflectors also exist in the form of modulated phase-conjugate mirrors (PCMs). In the latter case, a "time-reversed" wave is generated by the PCM with temporal encoding of the phase-conjugate wave.

Inexpensive corner-aiming retroreflectors are used in user-controlled technology as optical datalink devices (see Ronja). Aiming is done at night, and the necessary retroreflector area depends on aiming distance and ambient lighting from street lamps. The optical receiver itself behaves as a weak retroreflector because it contains a large, precisely focused lens that detects illuminated objects in its focal plane. This allows aiming without a retroreflector for short ranges.

A single biological instance of this is known: in flashlight fish of the family Anomalopidae (see ).

Retroflective tape is recognized and recommended by the International Convention for the Safety of Life at Sea (SOLAS) because of its high reflectivity of both light and RADAR signals. Application to life rafts, personal flotation devices, and other safety gear makes it easy to locate people and objects in the water at night. When applied to boat surfaces it creates a much larger RADAR signature, particularly for fiberglass boats which produce very little RADAR reflection on their own. It conforms to International Maritime Organization regulation, IMO Res. A.658 (16) and meets U.S. Coast Guard specification 46 CFR Part 164, Subpart 164.018/5/0. Commercially available as 3M part numbers 3150A and 6750I.

Retroreflectors are used in the following example applications:
*In with a total station or robot, the instrument man or robot aims a beam at a corner cube retroreflector held by the rodman. The instrument measures the propagation time of the light and converts it to a distance.
*In common (non-SLR) digital cameras, where the sensor system is retroreflective. Researchers have used this property to demonstrate a system to prevent unauthorized photographs by detecting digital cameras and beaming a highly-focused beam of light into the lens. [ [http://abcnews.go.com/Technology/FutureTech/story?id=1139800&page=1 ABC News: Device Seeks to Jam Covert Digital Photographers ] ]
*In movie screens to allow for high brilliance under dark conditions. [ [http://science.howstuffworks.com/invisibility-cloak1.htm Howstuffworks "Altered Reality" ] ]