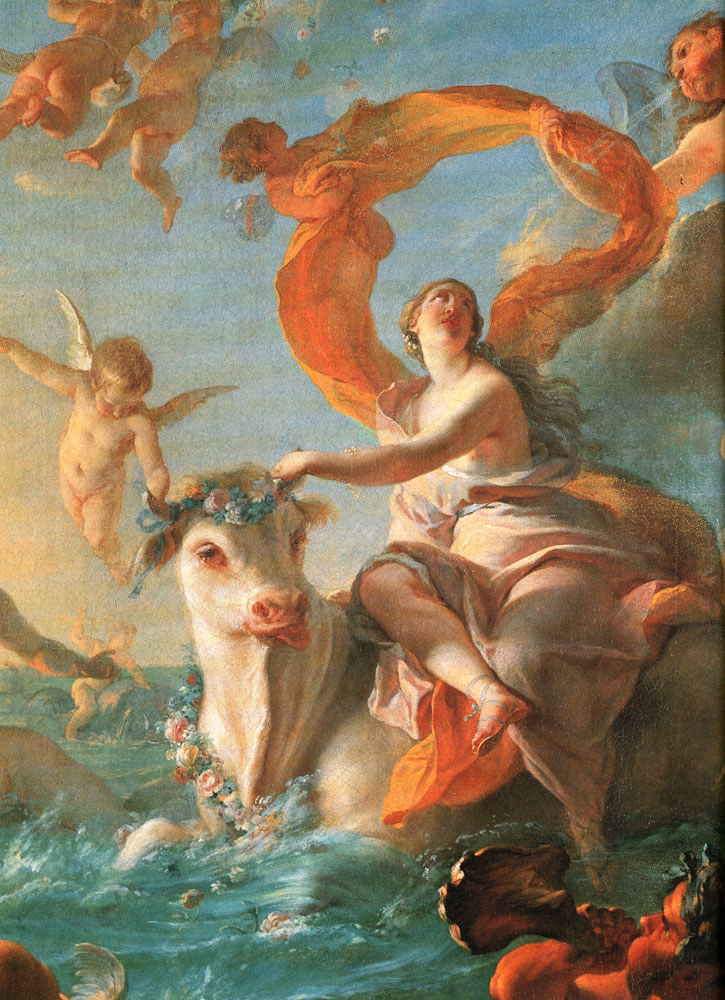 Europa (Greek Εὐρώπη) was a n woman of high lineage in , from whom the name of the has ultimately been taken. The story of her abduction by in the form of a bull was a Cretan story, as Kerényi points out; "most of the love-stories concerning originated from more ancient tales describing his marriages with goddesses. This can especially be said of the story of Europa." [Kerenyi 1951, p 108] The name Europa occurs in the list of daughters of primordial and Tethys; the daughter of the earth-giant and mother of by , was also named Europa.

Europa's earliest literary reference is in the "", which is commonly dated to the late 9th or to the [Pierre Vidal-Naquet, "Le monde d'Homère", Perrin 2000, p19] . Another early reference to her is in a fragment of the ic "", discovered at [The papyrus fragment itself dates from the third century CE: [http://www.worldwideschool.org/library/books/lit/epics/CollectionofHesiod/chap10.html see Hesiodic fragments 19 and 19A] .] . The earliest vase-painting securely identifiable as Europa, dates mid-seventh century BC. [W. Burkert, "Greek Religion" (1985)I.3.2, note 20, referring to Schefold, plate 11B. References in myth and art have been assembled by W. Bühler, "Europa: eine Sammlung der Zeugnisse des Mythos in der antiken Litteratur und Kunst" (1967).]

The of her Greek name (ευρυ- "wide" or "broad" + οπ– "eye(s)" or "face") [Kerenyi 1951 p 109: "she of the wide eyes" or "she of the broad countenance".] suggests that Europa as a goddess represented the lunar cow, at least on some symbolic level. Metaphorically, at a later date her name could be construed as the intelligent or "open-minded", analogous to "glaukopis" ("γλαυκώπις") attributed to . However, Ernest Klein suggests a possible Semitic origin in Akkadian" "erebu" "to go down, set" (in reference to the sun) which would parallel orient. [Klein, "Etymological Dictionary of the English Language" (Barking: Elsevier) vol. I A-K, 1966; Klein's etymology of Europa is singled out among his "optimistic" conclusions by G. W. S. Friedrichsen reviewing the "Dictionary" in "The Review of English Studies" New Series, 18.71 (August 1967:295.]

In the territory of Phoenician , (second century CE) was informed that the temple of Astarte, whom Lucian equated with the moon goddess, was sacred to Europa:

"There is likewise in Phœnicia a temple of great size owned by the Sidonians. They call it the temple of Astarte. I hold this Astarte to be no other than the moon-goddess. But according to the story of one of the priests this temple is sacred to Europa, the sister of Cadmus. She was the daughter of Agenor, and on her disappearance from Earth the Phœnicians honoured her with a temple and told a sacred legend about her; how that Zeus was enamoured of her for her beauty, and changing his form into that of a bull carried her off into Crete. This legend I heard from other Phœnicians as well; and the coinage current among the Sidonians bears upon it the effigy of Europa sitting upon a bull, none other than Zeus. Thus they do not agree that the temple in question is sacred to Europa." [Lucian, "" 4 ( [http://www.sacred-texts.com/cla/luc/tsg/tsg07.htm#fr_80 On-line text] ).]

The paradox, as it seemed to Lucian, would be solved if Europa "is" in her guise as the full, "broad-faced" moon.

Sources differ in details regarding Europa's family, but agree that she is n, and from a lineage that descended from Io, the mythical beloved of Zeus, who was transformed into a heifer. She is said to be the daughter of , the n King of Tyre, and Queen ("far-shining") or of ("white-faced"). [Kerenyi points out that these names are attributes of the moon, as is Europa's broad countenance.] Other sources, such as the "", claim that she is the daughter of Agenor's son, the "sun-red" Phoenix. It is generally agreed that she had two brothers, , who brought the alphabet to mainland Greece, and who gave his name to in , with Apollodorus including Phoenix as a third. After arriving in Crete, Europa had three sons: , , and , the three of whom became the three judges of the Underworld when they died. She married also rendered . According to mythology, her children were fathered by Zeus.

There were two competing myths ["" 3.1.1.] relating how Europa came into the Hellenic world, but they agreed that she came to , where the sacred bull was paramount. In the more familiar telling she was seduced by the in the form of a bull, who breathed from his mouth a saffron crocus [ [http://www.worldwideschool.org/library/books/lit/epics/CollectionofHesiod/chap10.html Hesiodic fragment 19] , a on "Iliad" XII.292 (which does not mention Europa)] and carried her away to Crete on his back&mdash; to be welcomed by , [According to the scholium on "Iliad" XII.292, noted in Karl Kerenyi, "Dionysus: Archetypal Image of Indestructible Life" p105. Pausanias rendered the name Asterion (2.31.1); in "Bibliotheke" (3.1.4) it is "Asterion".] but according to a more literal, euhemerist version in , she was kidnapped by Minoans, who likewise were said to have taken her to Crete. The mythical Europa cannot be separated from the mythology of the sacred bull, which had been worshipped in the .

Europa does not seem to have been venerated directly in cult anywhere in Classical Greece, [No public statue of Europa is mentioned by Pausanias or any other Classical writer, but a headless statuette, closely draped in a cloak over a , of the type called "Amelung's Goddess", but inscribed "Europa", at the Metopolitan Museum of Art, seems to be a Roman copy of a lost Greek original, of ca 460 BCE; an uninscribed statuette of the same type, from Hama, Syria, is in the Damascus Museum, and a full-size copy has been found in (Martin Robertson, "Europa" "Journal of the Warburg and Courtauld Institutes" 20.1/2 (1957:1-3, figs b, c); I. E. S. Edwards, ed. "The Cambridge Ancient History", plates to vols. V and VI 1970:illus. fig. 24.] but at Lebadaea in , Pausanias noted in the second century CE that "Europa" was the of — "Demeter whom they surname Europa and say was the nurse of Trophonios"— among the Olympians who were addressed by seekers at the cave sanctuary of of Orchomenus, to whom a cult and were dedicated: "the grove of Trophonios by the river Herkyna. ...there is also a sanctuary of Demeter Europa... the nurse of Trophonios." [Pausanias, "Guide to Greece" 9.39.2-5.]

The tell that Zeus was enamored of Europa and decided to seduce or ravish her, the two being near-equivalent in Greek myth. He transformed himself into a tame white bull and mixed in with her father's herds. While Europa and her female attendants were gathering flowers, she saw the bull, caressed his flanks, and eventually got onto his back. Zeus took that opportunity and ran to the sea and swam, with her on his back, to the island of . He then revealed his true identity, and Europa became the first queen of Crete. Zeus gave her a necklace made by [Hesoidic fragment.] and three additional gifts: , Laelaps and a javelin that never missed. Zeus later re-created the shape of the white bull in the stars, which is now known as the constellation Taurus. Some readers interpret as manifestations of this same bull the Cretan beast that was encountered by , the slain by (and that fathered the ). Roman mythology adopted the tale of the "Raptus", also known as "The Abduction of Europa" and "The Seduction of Europa", substituting the god Jupiter for .

According to ' rationalizing approach, Europa was kidnapped by Minoans who were seeking to avenge the kidnapping of Io, a princess from . His variant story may have been an attempt to rationalize the earlier myth; or the present myth may be a garbled version of facts &mdash; the abduction of a Phoenician aristocrat &mdash; later enunciated without gloss by Herodotus. For those set in the Christian interpretive tradition of myth as misunderstood history inherited from Herodotus, it is tempting to see in this story the remnants of oral history about the settlement of the island. Cretans were of course great sailors, as all islanders must be, and must have come from some mainland area by raft or ship. They must also have brought their cattle and other livestock with them, since bulls figured prominently in their sports, arts and religious imagery. In the mythological transformation of history, however, roles are reversed, and the bull provides the transportation for the founding mother of the Minoan people.

"Europa" provided the substance of a brief epic written in the mid-second century BCE by , a bucolic poet and friend of the Alexandrian grammarian , born at Syracuse. [The poem was published with voluminous notes and critical apparatus: Winfried Bühler, "Die Europa des Moschos" (Wiesbaden: Steiner) 1960.]

In "Metamorphoses", the poet wrote the following depiction of Jupiter's seduction::And gradually she lost her fear, and he :Offered his breast for her virgin caresses,:His horns for her to wind with chains of flowers:Until the princess dared to mount his back:Her pet bull's back, unwitting whom she rode.:Then &mdash; slowly, slowly down the broad, dry beach &mdash;:First in the shallow waves the great god set:His spurious hooves, then sauntered further out:'til in the open sea he bore his prize:Fear filled her heart as, gazing back, she saw:The fast receding sands. Her right hand grasped:A horn, the other lent upon his back:Her fluttering tunic floated in the breeze.

His picturesque details belong to anecdote and fable: in all the depictions, whether she straddles the bull, as in archaic vase-paintings or the ruined metope fragment from , or sits gracefully sidesaddle as in a mosaic from North Africa, there is no trace of fear. Often Europa steadies herself by touching one of the bull's horns, acquiescing.

Adoptions of the name

Her name appeared on s commemorating the "United Europe", which were first issued in . Jürgen Fischer, in "Oriens-Occidens-Europa" [Wiesbaden:Steiner) 1957.] summarized how the name came into use, supplanting the "oriens" - "occidens" dichotomy of the , which was expressive of a divided empire, Latin in the West, Greek in the East.

In the eighth century, ecclesiastical uses of "Europa" for the imperium of provide the source for the modern geographical term. The first use of the term "Europenses", to describe peoples of the Christian, western portion of the continent, appeared in the Hispanic Latin Chronicle of 754, sometimes attributed to an author called Isidore Pacensis [David Levering Lewis, "God's Crucible: Islam and the Making of Europe, 570 to 1215", New York: W.W. Norton, 2008.] in reference to the Battle of Tours fought against Muslim forces.

The European Union has also used Europa as a symbol of pan-europeanism, notably by naming its web portal after her, and depicting her on the Greek €2 coin and on several gold and silver commemorative coins (e.g. the Belgian €10 European Expansion coin).

The moon of Jupiter

The invention of the revealed that the planet
, clearly visible to the naked eye and known to humanity since prehistoric times, has an attendant family of moons. These were named for male and female lovers of the god and other mythological persons associated with him. The smallest of Jupiter's s was named after Europa.

* [http://ccwf.cc.utexas.edu/~perlman/myth/images/euro.jpgA metope from Sicily, carved with Europa, ca 550 - 540 BCE] : the bull's face, turned head-on, clearly reveals his Near Eastern iconic antecedents
* [http://www.fleur-de-coin.com/currency/eurocoins.asp Europa] on the of 2€