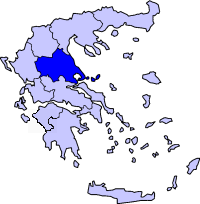 Thessaly (Greek: Θεσσαλία , "Thessalía" &mdash; Thessalian: polytonic|Πετθαλια "Petthalia") is one of the 13 peripheries of , and is further sub-divided into 4 prefectures. The capital of the periphery and traditional geographical region (and until 1987 official) is . Together with the regions of Macedonia and Thrace, it is often referred to unofficially as "Northern Greece". The periphery lies in central Greece and borders Macedonia on the north, Epirus on the west, or on the south and the on the east. Before the , Thessaly was known as Aeolia, and appears thus in 's "".

Its geography consists of a ring of mountains surrounding a central plain: and lowlands. It has a distinct summer and winter season, with summer rains augmenting the fertility of the plains. This has led to Thessaly occasionally being called the "breadbasket of Greece".

The region is well delineated by topographical boundaries. The and mountains lie to the north, the mount Olympus massif to the northeast. To the west lies the mountain range, to the southeast the coastal ranges of and .

Several tributaries of the Pineios river flow through the region.

There are a number of highways and the main railway from to (Salonika) crosses Thessaly.The region is directly linked to the rest of Europe through located in in a small distance from and . Until today flights links the region and brings tourists to the wider area, mainly in and . The new infrastructure includes a brand new terminal ready to serve 1500 passengers per hour and new airlanes.

Thessaly was home to an extensive culture around . Mycenaean settlements have also been discovered, for example at the sites of , and (near ). Later, in ancient Greek times, the lowlands of Thessaly became the home of baronial families, such as the Aleuads of or the Scopads of Crannon. These baronial families organized a federation across the Thessaly region, later went on to control the in northern Greece. The were renowned for their cavalry.

During the ( to ) the Aleuads joined the Persians. briefly transformed the country into a significant military power, though he was assassinated before any lasting achievements were made. In the Thessaly became dependent on and many served as vassals. In the Romans formally incorporated Thessaly into the province of Macedonia, though in 300 AD Thessaly was made a separate province with its capital at . It remained as a part of the east until the 13th century, when large portions were controlled by Vlach herdsmen (see ). In the aftermath of the Thessaly fell under the control of the , but in 1215 was conquered again by and became one of the independent territories governed by that family. The dynasty ended in 1318 and was followed by a period of Byzantine and Serbian domination. After another period of independence, Thessaly was conquered by the in 1394. In 1881 the Ottoman Empire ceded most of Thessaly to Greece. Ottomans occupied again the region during shortly and took small portions of it in 1897.

In 's epic, the "", visits the kingdom of Aeolus, and this is the old name for Thessaly.