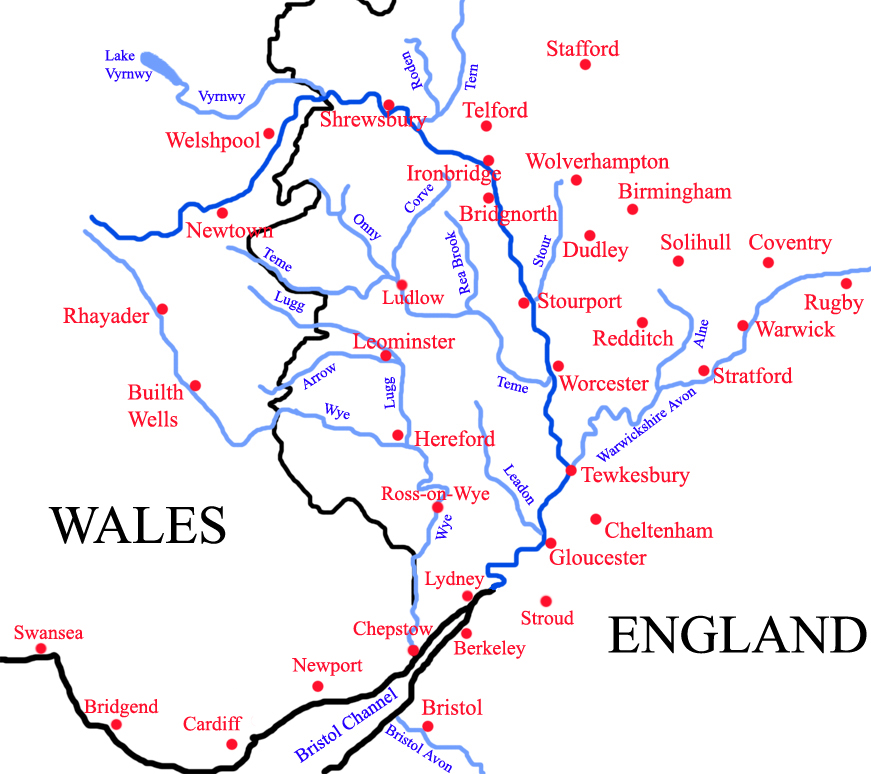 :"For other rivers named "Severn", see ."The River Severn (Welsh: "Afon ", : "Sabrina") is the longest in , at convert|220|mi|km|0. [cite web| url=http://www.bbc.co.uk/england/sevenwonders/west/severn-river/| title=The River Severn Facts| author=BBC| accessdate=2006-12-28] It rises at an altitude of convert|2001|ft|m|0 on near , , in the of . It then flows through , and , with the s of , , and on its banks. With an average discharge of 107 m³/s at , Gloucestershire, the Severn is England's greatest river in terms of water flow, and is considered one of the ten major rivers of the United Kingdom.

The river becomes the after the near , . The river then discharges into the which in turn discharges into the and the wider . The Severn's drainage basin area is convert|11420|km2|sqmi|0, excluding the and Bristol Avon which flow into the Bristol Channel. The major tributaries to the Severn are the Vyrnwy, Teme, Warwickshire Avon and Stour.

According to some sources, the name "Severn" is derived from the name Sabrina (or ), based on the mythical story of a nymph who drowned in the river. [cite web| url=http://www.geocities.com/andymorrall/sabrina.htm| title=The Legend of Sabrina| author=Andy Morrall| accessdate=2006-12-09] Sabrina is also the goddess of the River Severn in Brythonic mythology. The story of Sabrina is featured in Milton's "Comus". [cite web| url=http://www.whitedragon.org.uk/articles/sabrina.htm| author=Liam Rogers| title=Sabrina and the River Severn| accessdate=2006-12-09] There is a statue of 'Sabrina' in the Dingle Gardens at the Quarry, .

As the Severn becomes tidal the associated deity changes to Noadu (Romanized as ), who is represented mounted on a , riding on the crest of the Severn bore. [Clucas, P. (1985) "Britain - The Landscape Below". Guildford: Colour Library Books. ISBN 0-86283-174-1]

The River Stour rises in the north of Worcestershire in the , near St Kenelm's Church at Romsley. It flows north into the adjacent West Midlands at . It then flows westwards through and where it leaves the . It is joined by the Smestow Brook at Prestwood before it winds around southwards to , and then flows back into Worcestershire. It then passes through , and to its with the Severn at .

The , which begins at , flows eastwards through before entering England and joining the Severn at , . The flows north from its source in the and joins the Severn at . The , after flowing south from and being joined by the , meets the Severn at .

The joins the Severn, just above . The River Stour rising on the and flowing through , , and , joins the Severn at . On the opposite bank, the tributaries are only brooks, Borle Brook, draining the and Dick Brook. The flows eastwards from its source in , straddling the border between and , it is joined by the , and River Rea before it finally joins the Severn slightly downstream of Worcester.

One of the several rivers named Avon, in this case the Warwickshire Avon, flows west through Rugby, and . It is then joined by its tributary the River Arrow, before finally joining the Severn at , .

The port of is located on the , where another River Avon flows into it through the .

The , from its source in , , flows generally south east through the Welsh towns of and . It enters , flows through , and is shortly afterwards joined by the , before flowing through and , and then southwards where it forms the boundary between England () and . It flows into the Severn near the town of , slightly upstream of the on the opposite bank.

The flows into the Severn Estuary just south of .

The Severn is bridged at many places, and many of these bridges are notable in their own right, with several designed and built by the engineer . There also is the famous at , which was the world's first iron arch bridge.

Previous to the construction of the first bridge in 1966, the channel was crossed by the .

The , situated near the road bridge, carries the under the channel.

Cars could also be transported through the Severn Tunnel. In the 1950s three trains a day made round trips between Severn Tunnel Junction and Pilning. The vehicles were loaded onto open flat bed carriages and pulled by a small pannier tank locomotive although sometimes they were joined to a scheduled passenger train. The prudent owner paid to cover the vehicle with a sheet as sparks often flew when the tackled the grade leading to the tunnel exit. A rail coach was provided for passengers and drivers. Reservations could be made and the fee for the car was about thirty shillings in the early 1950s.

There have been many , making it Britain's most dangerous river. It has claimed many lives (figures vary depending on how it is recorded, circa 300 people), especially during the 20th century.fact|date=July 2007

There is a public right of navigation between , near , and Stourport. However this stretch of the river has little traffic, other than small pleasure boats, canoes and some tour boats in towns such as Shrewsbury and Worcester. Below Stourport, where the river is more navigable for larger craft, users must obtain permits from , who are the .

There are locks on the lower Severn to enable sea going boats to reach as far as . The most northerly lock is at Lincombe, about a mile downstream from Stourport.

The main operator of pleasure craft and particularly s on the river from the mid 19th century to the late 1970s were of , but also included the . There were also three ferries operating between Aust and Chepstow these were called the Severn King, Severn Queen and Severn Princess. The Severn Princess is currently undergoing restoration after being found in Ireland full of fertiliser, after dragging her back with her sinking twice on the way it is hoped that at some time in the near future she will be fully operational again. The Severn King and Queen were scrapped not long after their decommission following the completion of the First Severn Bridge.

In Worcester, the Worcester River Cruises have boat trips up and down the river operating the boats The Pride of the Midlands and The Earl Grosvenor. After 2008 there are plans for another boat, The Severn Travellor, to be refurbished and relaunched for trips.

In Shrewsbury, boat trips around the loop of the town centre are at present provided by the "Sabrina" and depart from Victoria Quay near the during the summer. [http://www.shrewsburyboat.co.uk/ ]

The River Severn extends down to the . The begins at this point and stretches to a line from (south of ) to Sand Point near . West of this line is the . In the Severn Estuary (or the in the last two cases, depending where the boundary is drawn) are the rocky islands called , and .

A curious phenomenon associated with the lower reaches of the Severn is the . The Severn bore forms somewhat upstream of the Port of , which is also the Southern terminus of the .

The river's , which empties into the , has the second largest in the world &mdash; about convert|15|m|ft|0, [cite web | url= http://www.environment-agency.gov.uk/commondata/acrobat/severnpositionmay2006_1508223.pd | format= PDF | work= UK Environment Agency | title= Severn Estuary Barrage | date= | accessdate= 2007-09-03 ] [cite web | url= http://www.bbc.co.uk/bristol/content/articles/2005/07/04/bristolchannel_feature.shtml | title= Coast: Bristol Channel | work= BBC | accessdate= 2007-08-27 ] exceeded only by the ; and during the highest tides, the rising water is funnelled up the estuary into a wave that travels rapidly upstream against the river current. The largest bores occur in spring, but smaller ones can be seen throughout the year. The publishes timetable and prediction of bore heights on its website. [cite web | url= http://www.environment-agency.gov.uk/regions/midlands/434823/ | publisher= | title= Severn Bore and Trent Aegir | accessdate= 2008-01-13] . Being the onset of the flood tide it is accompanied by a rapid rise in water level which continues for about one and a half hours after the bore has passed. The Severn Bore is a natural example of a self-reinforcing solitary wave or .

enthusiasts even attempt to surf along on the wave, which can be convert|2|m|ft|0. In March 2006, an "unofficial" record surf was achieved, for the longest-ever 'surf', by Steve King, a railway engineer from , . Despite the media acceptance of the record the exact distance of the ride was never verified and the record was later rejected by both the British Surfing Association and "". [cite web| url=http://www.severnsolutions.co.uk/twblog/archive/2006/04/17/severnborerecord| author=Tom Wright| title=Severn Bore World Surfing Record| accessdate=2006-04-17] The , as competent harbour authority for this part of the river, explicitly advise against this pastime.

In September 2005, several hundred surfers gathered in to celebrate 50 years since the first recorded attempt at surfing the Severn Bore and to view the première of Longwave by Donny Wright, [cite web| url=http://www.thelongwave.com| title=Longwave| accessdate=2007-09-13] a historical film documenting the evolution of the sport since its inception in 1955.

A huge tidal range and high level of surrounding industry and population have long made the Severn Estuary and a focus for tidal energy schemes and ideas. Plans for a &mdash; running 16 km (10 miles) across the Bristol Channel from near to and south west of to near and just south west of in &mdash; would generate a massive 8640 MW when the tide flows, and have been discussed for several decades now. The power generated would come from a lake of convert|185|sqmi|km2|0 with a potential energy depth of convert|14|m|ft|0. Tidal power only runs for around ten hours a day, but by using the enclosed lake as a reservoir of potential energy more hours of operation could be achieved. Other energy sources, such as wind and solar power, also create electricity at times that do not always match when it is needed. Excess power could be stored by pumping water uphill, as is already done at a variety of other installations in the UK.

The UK Government shelved the plans in the late 1980s due largely to cost issues and local environmental concerns. However, this was before recent huge rises in the price of energy, and before had started to be taken seriously. In April 2006 the approved the idea of utilising the tidal power, but the RSPB has raised serious concerns about the effect on the mud flats, that have European Environmental protection status, and the UK government Energy Review published later in the year did not endorse the scheme. [cite web| url=http://news.bbc.co.uk/1/hi/wales/south_east/4927744.stm| title=Backing for Severn barrage power| author=BBC News| date=21 April 2006|accessdate=2006-12-09]

A 6 mile (10 km) stretch of the in , known as the , was designated a by in 1986. Its historic importance is due to its role as the centre of the industry in the early stages of the . Ironbridge gets its name from the bridge across the Severn, built in 1779, which was the first cast-iron arch bridge ever constructed.

The sides of the estuary are also important feeding grounds for s, notably at the National Nature Reserve and the Slimbridge Wildfowl Trust.

*
* The long-distance footpath
* The organises rescue lifeboats from Wyre Forest to Beachley
* are based at
* The Severn Valley, an area straddling Shropshire and Worcestershire
* , a term with various different uses
* "" - 2005 TV programme where the River was described as one of the wonders of the .